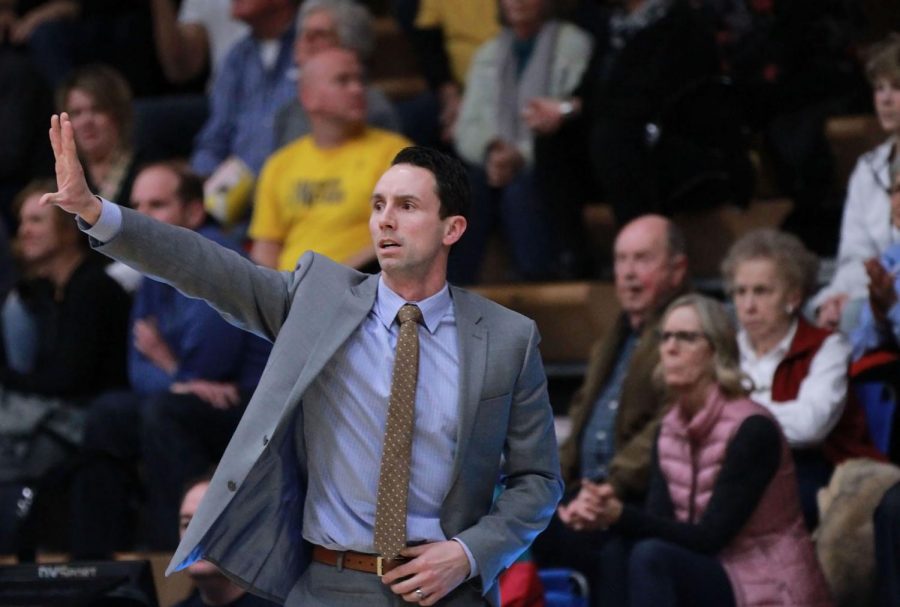 Brett Ballard instructs his team from the sidelines as they face Missouri Western State University Wednesday, Feb. 7 at Lee Arena.

Before the men took on the Bearcats, they would have to get past the Griffons of Missouri Western State. The game stayed relatively close for the entire affair, keeping the bottom ranked Griffons in an unexpectedly tight contest.

The Ichabods exited the first half with just a one point lead and were looking for a lot more coming out of the locker room for the second half. Even with junior Javion Blake’s seven points, plus senior Brady Skeens’ five, the Ichabods still needed more help in the second half to put away the Griffons.

Help would come in the form of two seniors, Tyas Martin and Cameron Wiggins. By the end of the game these two seniors  worked for a combined 29 points, with Martin having 13 alongside Wiggins’ 16.

Washburn ended up edging out Missouri Western State for this one with a six point lead that ended up with the Ichabods winning by four. The final score was 74-78 with a perfect setup for the a top tier match up against the Bearcats.

The Feb. 10 match would be previewed as a battle of the juggernauts in the MIAA conference. Both teams lead the conference in terms of rankings and performance, and most likely representing a match up that would potentially decide the conference title in the regular season.

Washburn started out with a hyped up crowd and intense defensive pressure, pushing the Bearcats to almost turn the ball over on the first play. However, Washburn ended up with the first turnover of the game as they suffered a shot clock violation.

In the first minute and a half, the Ichabods kept the defensive pressure on high with a block and a defensive foul where Brett Dougherty missed both free throws. The Bearcats scored first on an easy layup in the paint and Washburn followed with their own.

Deadlocked at two, the Bearcats sunk a bucket at the 15:30 mark to finally break the ice. With both teams fighting hard on the defensive ends, this game seemed to be setting up as a battle of the defenses, a game that Washburn usually wins.

The last time these teams met, Washburn struggled to guard the Bearcats and their three-point shooting ended up getting the better of the Ichabods. This time around, the Bearcats were relatively cold from behind the arc, missing their first four three-point field goals.

That was finally broken with a three-pointer by NWMS’ Joey Witthus. This put the score at 9-13, with Washburn trailing by four points. Washburn eventually fell behind in the first half, trailing by 11 at halftime.

As the second half began, Washburn started the game off with a three-pointer from senior, Randall Smith, however, the Bearcats answered back with a three of their own.

On the very next possession, Washburn got one down in the paint with the free throw made by Martin. The Bearcats continued to answer back, however the score would be 31-19 by the 18:08 mark in the second half.

Washburn finally broke the silence and brought the packed crowd at Lee Arena to a roar with another layup by Martin. Again, the Bearcats answered right back with a layup of their own on the other end, putting the score at 23-33 with 16:20 left in the game.

Martin got the arena rocking with two straight baskets in the paint, setting the score at 27-34 and forcing NWMS into a timeout with 15:09 left in the game.

Wiggins electrified the crowd even more with a three-pointer to make the score 34-30, leaving Washburn behind by only four points.

Wiggins electrified the crowd even more with a three-pointer to make the score 34-30, leaving Washburn behind by only four points.

With Washburn looking to add more momentum after their major scoring plays earlier, Martin answered with a three-pointer setting the score at 33-39 with 13:12 left in the second half.

As the game wore on, the Ichabods caused Lee Arena to explode after a three-pointer from junior, Javion Blake, cutting the Bearcats lead to two with nine minutes left in the game.

With under six minutes to play, the Bearcats added two to the board on free throws, putting the score at 46-40. They got the ball back with about five minutes left where they would sink a three-pointer setting the score at 49-40.

NWMS was unable to inbound the ball as Skeens intercepted a hail Mary pass down the court. Martin got to the line, sinking one free throw putting Washburn down by only eight.

After a couple of free throw trips for the Ichabods, NWMS sunk a three-pointer, setting the score at 52-45 with barely a minute left.

Blake went to the line and made both, setting the score at 55-46. Northwest Missouri State answered with another three, putting Washburn in foul mode.

The Bearcats ultimately pulled away with a win, taking the No.1 spot in MIAA rankings by defeating the Ichabods at home. The final score was 58-50 with the Bearcats taking the win.

“I thought we came out a little tight and tentative which led to some errant shots. When we settled down, we just did not do a good job of moving the ball and using our speed,” said coach Brett Ballard.

Up next for the Ichabods is an away game against Emporia State at 7:30 p.m. Feb. 13 in White Auditorium. The Ichabods look to hold third place in the conference as both Northwest Missouri State and UCM advance ahead.