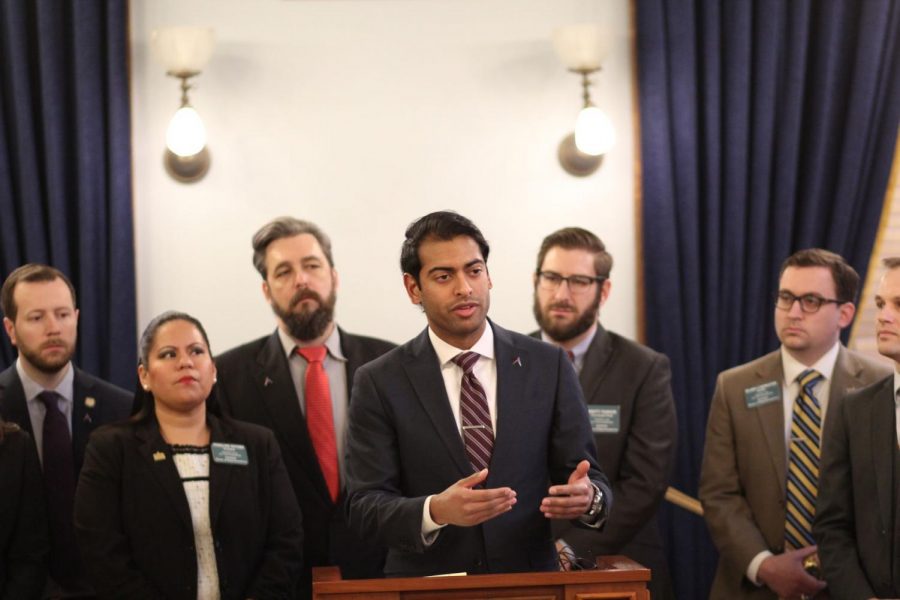 The future of the government is in our hands. A group of young legislators announced the creation of the Kansas Future Caucus Feb.6.

“We notice that there is a real mistrust of government for individuals in this age group,” said Rep. Stephanie Clayton (R-Overland Park), one of the co-chairs of the caucus. “I think that people feel largely that they are disrespected, or abandoned or ignored by those who represent them. And so we here at the future caucus want to say to those Kansans, who are 45 and younger, that we see you and we respect you and we are ready to listen and we care about the many issues that you face.”

The Kansas Future Caucus is a part of the larger Millennial Action Project (MAP), which aims at getting younger people involved in government. Steven Olikara, the founding president of MAP, has traveled the country building a bipartisan movement of young policymakers and leaders who are dedicated to enacting policies beyond party politics on behalf of the people. Kansas became the 21st state to join that movement Feb 6.

Co-chairs, Rep. Stephanie Clayton and Rep. Brandon Whipple (D-Wichita), spoke on the caucus’s aims to provide a voice for Kansas’ youngest generation and to find solutions for issues like job creation and student debt.

“Our biggest export as Kansas is educated, talented young people,” Whipple said. “Kansas has been exporting some of its best and brightest outside of the state.”

He told a story of a woman he met when he was campaigning. She only saw her grand kids twice a year because her kids couldn’t get jobs in Kansas.

“One of the first steps we can do is bring them to the table,” Whipple said. “Young families need to be sure that we’re here representing them.”

Olikara joined a bipartisan group of young Kansas state representatives, stressing the importance of this movement and how beneficial it is to the coming generation.

“All across the country [we have] the next generation of leaders standing up and saying we need to move beyond our partisan divisions to deliver opportunities for the younger generation that is coming up right now,” Olikara said. “We have blue states, red states and purple states all across the country who’ve joined the state future caucus network with the Millennial Action Project. We also have a chapter in the United States Congress that’s a bipartisan group of 30 congressional members who are a part of this effort.”

{{tncms-inline content=”&lt;p&gt;“This is part of a larger national movement that we have been building all across the country of the next generation of leaders standing up and saying we need to move beyond out partisan divisions to deliver opportunities for the younger generation that is coming up right now.”&lt;/p&gt;” id=”7b8eb0d6-c051-4dd2-8a4b-da0bdef2138f” style-type=”quote” title=”2″ type=”relcontent”}}

Olikara said that he is most optimistic when he witnesses the courage and leadership that he has seen from this younger generation.

Olikara believes young people are not apathetic; they have the highest levels of service participation in the nation. However, less than one third of millennials see politics as a rewarding career, which is exactly what Olikara looks to change through MAP.

Reps. Clayton and Whipple echoed Olikara’s words, expressing their excitement in working to find new, innovative ways to solve political issues that are important to younger generations and increase political involvement for millennials.

In a statement released later, Olikara thanked Reps. Clayton and Whipple for spearheading this movement in Kansas.

“As the State Future Caucus Network continues to grow, we have seen what young legislators can accomplish when they put party differences aside and collaborate on bipartisan legislative solutions,” Olikara said.