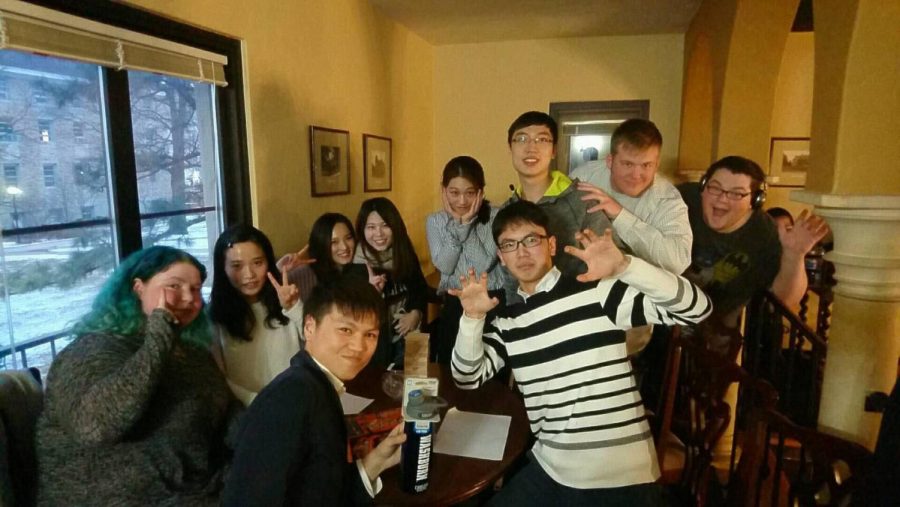 Washburn’s international students are always looking for ways to bring some new culture to campus.

A melting pot of foreign students gathered to have a combined welcoming party at the International House on Friday, Feb. 23.

In the beginning of every semester, the International Club hosts a welcoming party for new and returning international students. They also plan a party for students who study abroad later in the semester.

“This semester, we haven’t had the first welcoming party yet,” said Miyuki Nishimura, president of the International Club. “We also have Japanese exchange students that got here last week and there are about 30 or 40 students. We always have a welcome party for them too. Since we didn’t have an official welcome party, we combined two parties together.”

This year, the party was held at 5 p.m. to 7 p.m. Many students were excited about being at Washburn University and meeting new people.

“I have been very happy here, enjoying life,” said Ryosuke Sadakata, an economics major from Japan. “I like playing basketball and climbing the rock wall at the gym on campus.”

A handful of American students also joined the event as everyone enjoyed pizza, wings, music and an array of board games.

“We host all the events throughout the semester to try and increase the diversity on campus,” Nishimura said. “All the parties and the events we host are not only for international students, but also for local American students too. The idea is to mix everyone together. We also have a lot of board games like Jenga and Uno. So, even if you can’t speak English fluently, you can still have fun. We basically picked the games that you don’t need to speak very much.”

Other Japanese students were excited to be on campus enjoying the area.

“It’s fun here,” said Mizuki Ushio, a sophomore commercial science major from Japan. “I have many friends and my favorite thing about the area is that riding the bus is free. There’s no need to pay.”

Liandro Rodriguez, a senior public relations major at Washburn, also joined the fun and was amazed to see the international house overflowing with students.

“I think it’s a good idea to talk to international students,” Rodriguez said. “It takes people out of their comfort zones. It always makes me wish I could speak more than one language so that I could have conversations with people from all over the world.”

The event was a great success. Many students met new people, made new friends, and had a great time. When the next party begins, don’t be afraid to stop by.