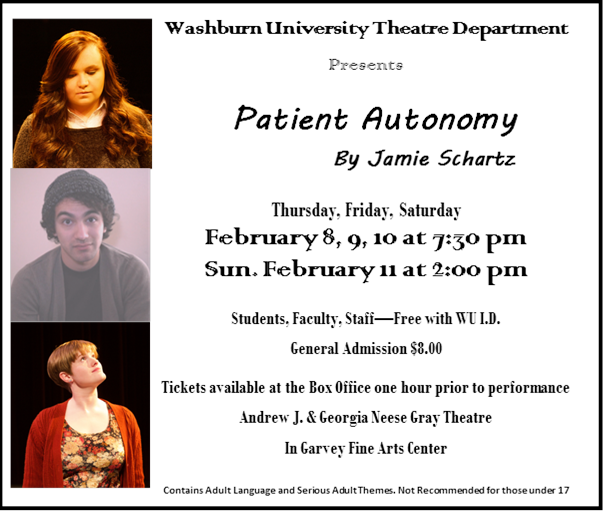 Life, death and the toll is takes on the living are the themes of the student-written play “Patient Autonomy” which is set to to premiere Thursday, Feb. 8.

It has been a work in progress for almost four years and it has finally culminated in a show that shines light on a topic that is hard to discuss: death and how one deals with a tragic loss.

Everyone in the world has at one point thought of, imagined or seen death firsthand. As humans, we are constantly reminded of our own mortality. In “Patient Autonomy,” an original play written by senior theater major Jamie Schartz, three teenagers have to brave difficult choices and harsh realities as they are faced with impossible decisions about love, life and ultimately, death.

The production showcases a landscape of Jules’s mental state after suffering a tragic loss, and how she deals with her pain and grief. It also explores concepts of human mortality and what happens after death.

“I would describe it as a story that very accurately depicts the effects of loss. A loss of choice, a loss of someone you love, and a loss of control. It shows how time can help you move on, but sometimes it takes certain people more time to move on than others” said Dennison of the message behind the production.

Not only are the actors and directors all students, but the production team and stage crew are students as well. This team of hard-working students have worked tirelessly for a little over a month to pull this show together quickly. Grace Foiles, senior theater major, was the set and co-costume designer, and has worked very closely with Dennison and Schartz to bring the story to life in a extremely visual and accurate manner.

Dennison hopes that the audience will walk away knowing that “loss is universal, but the way each person deals with their feelings of grief can be very different.”

“Patient Autonomy” will be showing at 7:30 p.m. Feb. 8 through Feb. 10  and  Feb. 11 at 2 p.m. in the Georgia Neese-Gray theatre. Admission is free to students and faculty with a Washburn ID and general admission is $8. The box office will be opening one hour before each show for those that wish to purchase tickets.