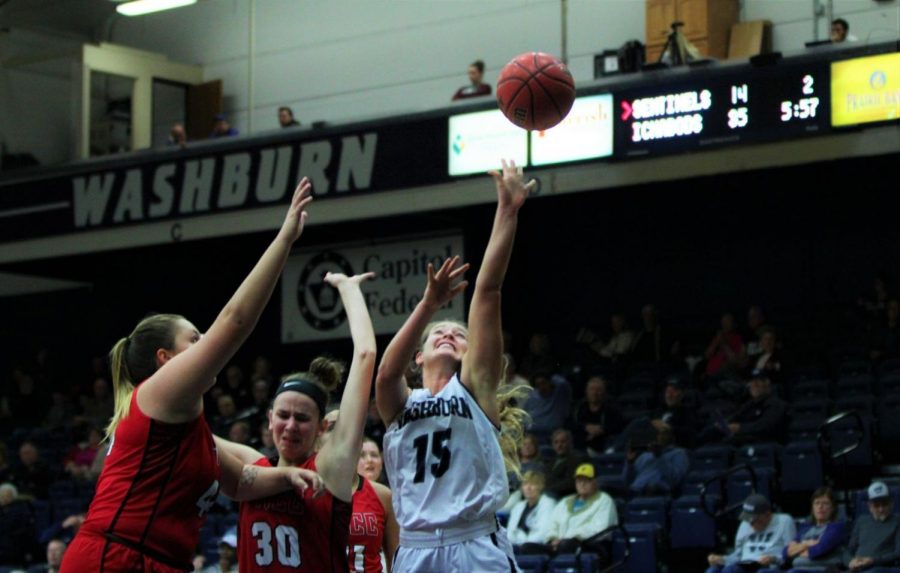 With the final stretch of the season winding down, the Ichabods needed some wins after a dismal part of their regular season. They faced Emporia State in White Auditorium Feb. 13 and then Southwest Baptist University Feb. 17.

Washburn struggled early in the season against Emporia State, losing to the Hornets by a margin of 70-62. This time around, however, the Ichabods came out with an impressive second half attack on Emporia State’s Senior Night.

The first period started off as a battle on both ends, Washburn ended up trailing Emporia State by a score of 20-25. While Washburn was behind by five heading into the second period, they made it up with a 15-10 second period score.

At halftime, the Ichabods were tied with the Hornets at 35. Sophomore Alexis McAfee had 12 points by halftime along with senior Axelle Bernard and sophomore Reagan Phelan’s 10 total points.

By the second half, the Ichabods pulled away by a wide margin. In the third period alone the Ichabods outscored the Hornets 19-11 and then the Ichabods took off in the final period with a margin of 20-13 capping off a 15 point win with a final score of 74-59.

McAfee continued her offensive production in the second half as well, ending up with 22 total points along with Bernard’s 16 and Phelan’s 15, respectively.

“We are kind of rolling right now. Things are feeling good, we probably played our best basketball [against Emporia State],” McAfee said.

The Ichabods then went on to face the Bearcats of Southwest Baptist. This game was a tight contest throughout as Washburn looked to continue their season turnaround. Washburn started the first period with a score of 18-16 leading the way into the second.

The second period saw the Ichabods down by two as they headed into halftime. The leading Ichabods by the end of the second period would be Bernard with six, Phelan with five, and junior Taylor Blue with seven.

“We just need a couple games to get our confidence back, with these recent wins, hopefully we can continue with that confidence,” freshman Hunter Bentley said.

In the final half, the Ichabods kept the game close. The Ichabods down by four in the third period with a score of 15-17. They needed a major effort to put the Bearcats away in the fourth.

They got their final push in the fourth from Bernard and Phelan who surged the Ichabods forward with their offensive production. The Ichabods ended up outscoring the Bearcats in the fourth 22-15 and won the game by three with a final score of 69-66.

Up next for the Ichabods is another road game against the Bronchos of University of Central Oklahoma. Washburn will head to Hamilton Field House Feb. 22 for their second to last game of the regular season to try and improve their standing in the MIAA conference.