‘What We Saw’ reveals the scary side of small town life 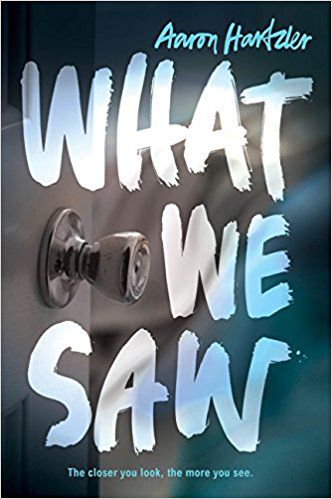 See no evil: Based on the 2012 Steubenville High rape case, "What We Saw" discusses how rape cases affect small towns. The book focuses in on the discussion about the role that bystanders have in sexual assault cases.

No one here doesn’t have a fundamental understanding of the concept of the small town; a community where the cows outnumber the people five to one, high school sports are the chosen water cooler topic, and a lonely DQ that hasn’t been updated since Theodore Roosevelt was inaugurated serves as the town social scene.

Aaron Hartzler’s What We Saw takes the traditional feel of a typical small town, but instead of having the stereotypical hidden darkness be a Steven King-esque creation, the monster is all too human: a rapist, protected by a school that wanted to win a championship.

As a book, my feelings on the overall work are mixed. On one hand, the pacing was fantastic. Stories that explore current issues have to be gripping and make you feel the urgency that the main character is feeling, and the book did a great job ruthlessly driving the plot forward without ever loosing steam. Hartzler’s casual prose draws the reader in from beginning to end, and he does an excellent job of using quick, repetitive phrases to mimic how girls think when they are panicked for several days. The uncomfortable, tense tone is nice as well-even when the plot shifts to the love story, the reader never loses the feeling that something is about to happen to bring everything crashing down.

My main issue with the book was the characters. For most of the book, I thought the characters were perfectly serviceable to the plot, nothing memorable, but most were developed, and hints were dropped throughout the story that most had lives outside of the plot. The rapist was a smug disgusting stain on humanity, and the reporter had dual interests.  However, all the hard work put into the characterization of the friend group was wiped away about three-fourths of the way in, and for a book whose plot relies on relations within a small-town community, this became a massive problem. Until the three-fourths marker, most of the characters seemed to have varied reactions towards the rape. Some felt the girl shouldn’t have drunk enough to pass out, some were mad that people were upset at the girl at all, while others wanted to wait for proof before accusing anyone. It became clear towards the end that each female in the friend group wasn’t in the story for any reason except to present a specific argument about rape for the main character to knock down. Once their point of view about rape or the situation surrounding the rape had been discredited by the narrator, they did not do much more for the rest of the novel. As a result, by the end of the novel, most characters had been whittled down into nothing more than their opinion on one subject, which is a massive disservice to their characters and the understanding between the author and the reader that human beings are too complex and dynamic to be reduced to one opinion on a single topic.

Overall, your feelings toward What We Saw will differ based on what you read it for. As a thriller and an exploration of the way social media has affected rape cases, it’s a good book. As a book to open discussion, I feel like some of Hartzler’s dialogue choices hinder discussion by being too partisan in the aspects of the book that did not involve rape, which could make put some readers on edge and less willing to share their entire opinion. As a book for Washburn to use to either draw parallels with the actual case that it was based on or go along with the upcoming art show that discusses the same subject, it provides a decent enough outline to help emphasize the points the art show will be making.