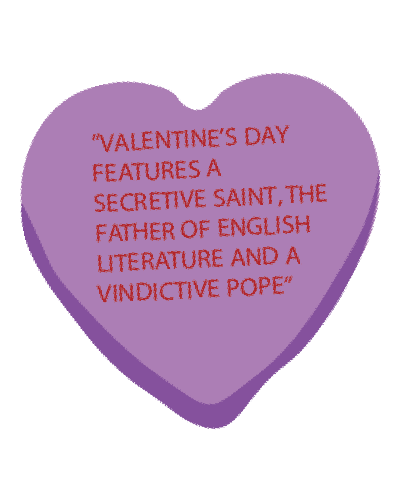 The time to coddle the loved ones in our lives almost to the point of being sickeningly sweet has returned once again.

Most of us enjoy this excuse to show our appreciation to people in our lives, romantic or not, but Feb. 14 hasn’t always been so sentimental.

While the identity of the actual St. Valentine isn’t clear, the origin of Valentine’s Day can be traced back to the Roman celebration of Lupercalia.

This festival typically lasted from Feb. 13 to 15. To cleanse the city of evil spirits and promote health and fertility, men would sacrifice a goat and a dog. After doing so, they would skin the animals, making strips of hide for men to hit women and crops with. They believed this would promote fruitfulness.

The first part of that doesn’t sound too romantic, but the Romans knew what they were doing. During this drunken party, men would draw women’s names from bowls in an ancient form of match making. The couple would then pair up for the year, and often marry after that. Who said romance didn’t go hand-in-hand with sacrifice?

As this affair, fit for Dionysus himself, continued, the church decided to get involved. Naming Feb. 14 a day for appreciating St. Valentine was the beginning of the end of Lupercalia. It’s all pretty straightforward, despite the fact that there were three St. Valentine’s, all of whom were martyred. While not specified, it’s assumed that the day was made in remembrance of the one who wed young couples against the Emperor’s wishes. It was believed at the time that single men made better soldiers.

Eventually, Lupercalia was banned and Valentine’s Day became the sole ruler of February. During the Middle Ages, Valentine greetings were customary, and the first written valentine was sent in the 1400s. From there on, lovers and friends exchanged tokens, treats and cards.

The next big advancement of the holiday came in the 1840s, when Esther A. Howland, “Mother of the Valentine,” began selling the first mass-produced valentines in America. With the printing press, pre-made cards became cheaper and sales really started to skyrocket. The rest, as we know it, is history. Valentine’s Day continues to be loved and hated by the many.

Valentine’s Day is currently celebrated in the United States, Canada, Mexico, the United Kingdom, France and Australia. This year it’s been estimated by the National Retail Federation that Americans will spend approximately $19.7 billion on this year’s Valentine’s Day.

Sure, today might have started off as a way populate the earth, but it’s since evolved to a sweeter, gentler meaning. Whether you decide to contribute to the $19.7 billion this year, or not, have a day filled with love- and maybe a few goat hides.