‘Black Panther’ one of Marvel’s best 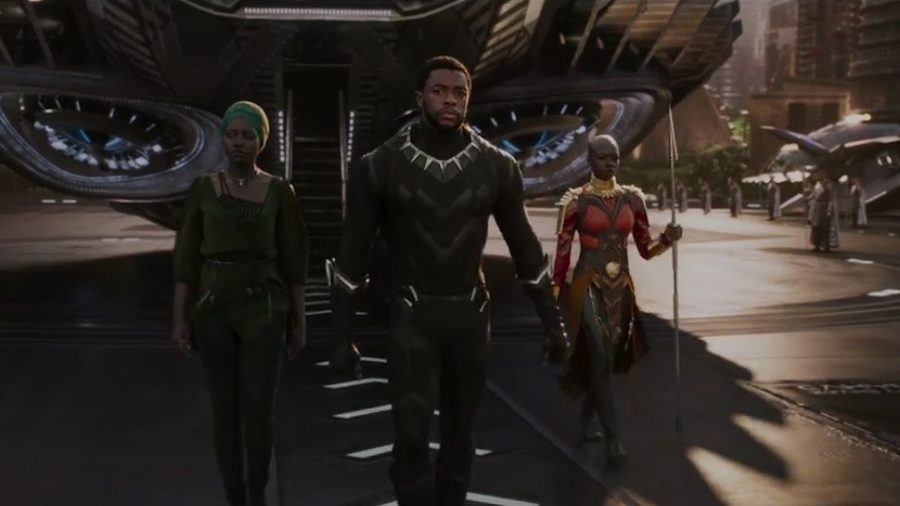 A unique style: The visuals, costuming, sets and vehicle designs of “Black Panther” are all based on afrofuturism which is a cultural aesthetic and philosophy that specifically focuses on how Africa would look in the modern day had it not been colonized and had its resources and culture stripped away by invading Europeans.

Set in the aftermath of the Sokovia Accords and “Civil War,” new king T’Challa (Chadwick Boseman) must take the throne of his kingdom and decide in exactly what way he is going to rule the country of Wakanda. More than just a small impoverished monarchy in the heart of Africa that the world believes it to be, Wakanda is a secret utopia that is more vast and powerful than any other nation on Earth, thanks to its vast supply of Vibranium which they have used to create incredible breakthroughs in fabrics, stealth, flight, weaponry and even medicine. Before long T’Challa is beset by an enemy from America going by the alias Killmonger (Michael B. Jordan) who knows of the secrets of Wakanda and sees himself as a more worthy candidate for the throne. With the help of his loyal general of the guard Okoye (Danai Gurira), a talented spy, his former lover Nakia (Lupita Nyong’o) and his scientifically ingenious sister Shuri (Letitia Wright), T’Challa must stop Killmonger from taking his home from him while also repairing the rift the latter has driven through his people.

“Black Panther” already has all the individual elements that audiences love about the films from the MCU. The action isn’t the best that has ever graced the Marvel film series, but it is still visceral and exciting. Watching T’Challa flip and glide through the air, bullets reflecting off his suit and his claws digging slicing and dicing his enemies is just a small piece of fight scenes featuring Okoye who wields a spear in some incredibly interesting ways. One of the best moments of the film is when she throws it through the back window and then the windshield of a moving vehicle only for the vibranium spear to impale into the ground and destroy the entire car as it runs through it. Add the really incredible scenes of battle between the two warring factions led by T’Challa and Killmonger and you have some really great action moments.

Even if the action isn’t as spectacular as some of the past movies, the actual drama behind why the fighting is happening is some of the absolute best that the Marvel films have ever offered.

T’Challa and Killmonger aren’t just nemeses, they are the two sides of the same person. In a way, the two main characters of “Black Panther” are one in the same, but they were forced into two different types of lives. Killmonger, in particular, is the strongest character here and he exists as a metaphor for the pain and suffering that young African-American men deal with on a daily basis. He loathes the colonizers who took his land away from him and he despises the history of violence and oppression that his people have experienced for generations. For him, Wakanda stands as a symbol of a place that let down his people. If Wakanda wasn’t so secretive and shared the wealth with black people all over the world, then, in Killmonger’s mind, years of oppression and racism could’ve been avoided.

T’Challa represents the other side of Killmonger. He’s a man who sets his eyes on what is best for his people, but refuses to complicate matters by involving other people. He keeps the peace, but if he only knew what his people outside his borders were going through then he would have no choice but to help. This is the moral dilemma that T’Challa wars with throughout the movie.

Killmonger is the greatest Marvel villain in any of the movies. In fact, he deserves more credit because he’s one of the most interesting and well-structured villains in film from recent memory. He’s an antihero through and through and one whose message actually finds you rooting for him. Killmonger’s methods are evil, but his motivation is sound and understandable.

This tension and these issues being addressed are some of the deepest that Marvel has addressed in a long time. While “Black Panther” has individual elements that could be considered flaws, they somewhat pale in comparison to the movie’s intent and how well it executes its commentaries on the societal pressures constantly facing black men and women.

The action may not be perfect, the pacing at the beginning may be a tad bit too slow for some people, but what the movie is saying makes all of these potential flaws fade into the background. Should a film be critiqued on every single minute flaw it has, or should it be considered a groundbreaking piece of filmmaking based on what it is doing as a whole? I think the latter is the best approach to criticism and evaluation of film and based on that criteria, “Black Panther” is a really incredible work of blockbuster cinema.

Masterfully performed by all involved, staged in an incredibly beautiful setting and providing a culture of people with a film that celebrates what makes them unique as well as digging deep into themes that many films dare to tread, “Black Panther” is a must-watch movie and it is certainly one of the best, if not the best, Marvel movie to date.