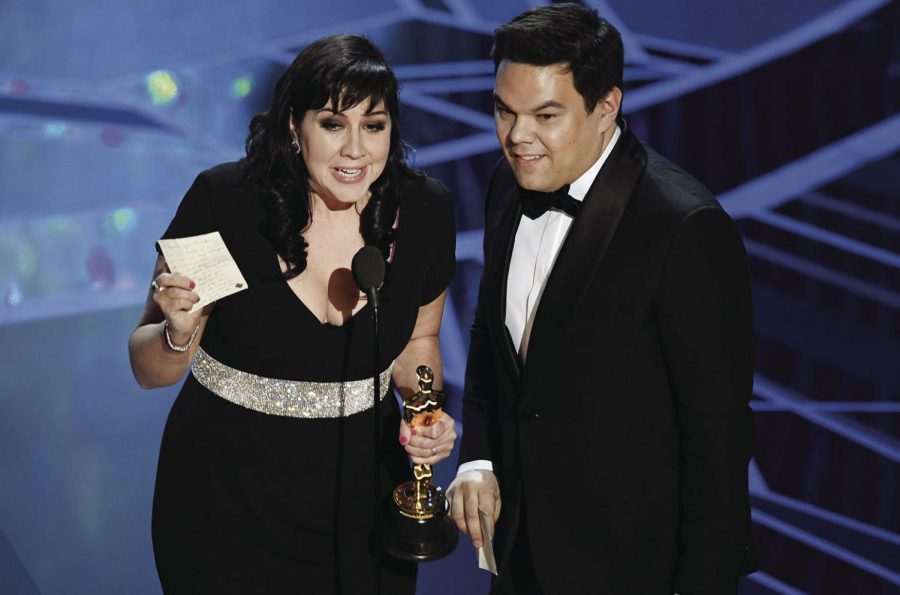 The Academy Awards once again brings contentious awards season to a close with a lavish night of stars and film appreciation.

The ceremony brought plenty of surprising and inspiring wins which highlighted the Academy’s constant push towards equality and diversity.Jimmy Kimmel hosted the 90th Academy Awards, often called The Oscars, and during his host gig, Kimmel often turned to The White House for jokes. In speaking on the critically acclaimed film “Call Me By Your Name,” which tells the story of a 17-year-old boy coming to terms with his homosexuality and falling in love in Italy in the 80s, Kimmel made a joke that was both praised and derided on social media. “We don’t make films like ‘Call Me By Your Name’ for money,” Kimmel said. “We make them to upset Mike Pence.” This, of course, references Vice President Pence’s anti-LGBT views which clash very much with the story being told in “Call Me By Your Name.”Later in the night, James Ivory, the screenwriter of “Call Me By Your Name,” went on to win the Oscar for Best Adapted Screenplay. It was the 89-year-old’s first win after four previous nominations, three of which were for Best Director. This win also made Oscar’s history as Ivory became the oldest man to ever win a screenplay award. In a shirt emblazoned with the star of his film Timothee Chalamet’s face, he spoke on how “Call Me By Your Name” can be a story for people of all types.

“Whether we’re straight, gay or somewhere in between, we’ve all gone through first love, I hope, and come out the other side mostly intact,” Ivory said.

This wasn’t the only record-breaking award handed out Sunday night. Jordan Peele won the coveted Best Original Screenplay award for his celebrated debut feature film “Get Out.” This horror film featured a young black man’s worst fears come to life when meeting his white girlfriend’s family. Peele is the first black man to win the award. Peele was also nominated for Best Director and his film (and himself since he is a producer of it) was nominated for Best Picture. Both of those awards were lost to Guillermo del Toro and his film “The Shape of Water.”

This is the second nomination and first win for del Toro who has been a prominent figure in the film world for quite some time now. “The Shape of Water” nabbing Best Picture is also significant because the film’s roots as a monster film had many labeling it as the first win for a science-fiction film.

There’s some pushback from this because the film is officially listed from multiple sources as a romantic-fantasy film. This is still impressive since it would be one of only two fantasy films to win the Best Picture, the other being “The Lord of the Rings: Return of the King.” The reason it is likely often referred to as a sci-fi film is because saying it is the first one to win an Oscar gives the genre much more prestige than the Academy regards it with.

“The Shape of Water” also won the most awards of the night with four, including the two aforementioned awards as well as Best Production Design and Best Original Score, the latter being won by Alexandre Desplat, who has been nominated a total of nine times and won twice.

“As basketball players we’re supposed to shut up and dribble,” Bryant said. “I’m glad we did a little bit more than that.”

One of the biggest wins that excited many movie fans online was heavily-praised and beloved cinematographer Roger Deakins. After being nominated 14 times, Deakins finally won the Best Cinematography statuette for “Blade Runner 2049.” Deakins has been putting his visual mark on films for a while now, crafting the shots and visual tapestry of some of cinema’s most iconic films. His work includes, but is not limited to, “Skyfall,” “Sicario,” “No Country for Old Men,” “O Brother, Where Art Thou?” and “Fargo.” His award finally arrived after more than 40 years in the business.

The Academy Awards is considered by many to be a lengthy and tedious affair. A night where Hollywood can look upon itself and feel mightier than the world around it. Although one moment during the 90th ceremony captured why so many tune in to watch what they consider a fruitless endeavor of Hollywood self-indulgence.

Jimmy Kimmel, with several big name actors and actresses in tow, walked across the street to interrupt and excite several moviegoers and remind them how the Oscars and movies would be nothing if it wasn’t for the excited, movie-loving audiences who support the art of filmmaking.

As Armie Hammer and Ansel Elgort launched hot dogs at excited theater patrons, and Emily Blunt eagerly handed out candy, over the roar of excitement Gal Gadot, Wonder Woman herself, cheered loudly. “This is so much better than the Oscars.”

At the moment, Gadot captured what’s truly important about The Oscars. It’s not the gowns or the people you picked in your poll predictably winning what they were nominated for. It’s about the movies.