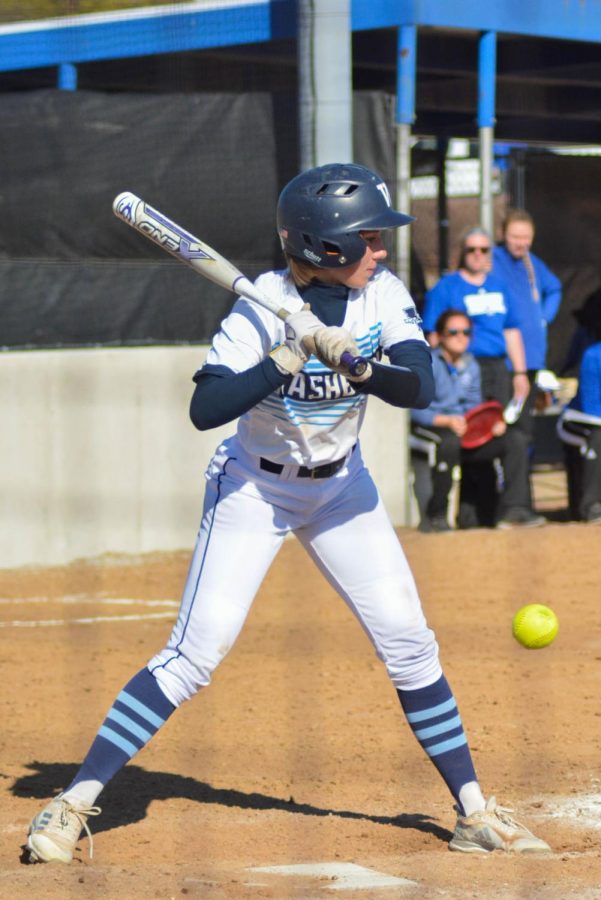 Ready stance: Junior, Emilee Baker watches a ball go by against an MIAA opponent at the Washburn Softball Complex

The softball team had four games to play this week. Two games were March 9 against Missouri Southern State, and the other two were March 10 against Pitt State.

In the first game against Missouri Southern, the Lions got an early lead with a run in the first-inning. The Ichabods took a 2-1 lead in the third-inning with runs by Emilee Baker and Samantha Stallbaumer.

Morgan Henry earned another run in the next inning, helping Washburn add to their lead. In the fifth-inning, Missouri Southern showed some fight, closing the deficit to one. In the final inning, Washburn added another run, this one by Stallbaumer again.

Then, they managed to hang onto their lead and win the game by a score of 4-2.

After their victory in the first match with Missouri Southern, Washburn faced them again. This time, the Ichabods were the first to score, with a run by Stallbaumer in the opening inning.

Baker and Savannah Moore added on runs of their own to get Washburn out to an early 3-0 lead. Both teams stuck to stout field play after that, as neither team scored again for three innings.

Washburn broke the scoring silence with a run by Baker. With their new 4-0 lead, the Ichabods finished out the game, preventing any scoring by the Lions, leading to their second win of the week.

The following day, Washburn traveled to Pittsburg, Kansas to challenge Pitt State. Again, Washburn got off to a good start, with Baker adding to her run total. Not to be outdone, the Gorillas scored a run to tie the score at 1-1 after the first-inning.

Maddie Anderson scored a run in the third-inning to get Washburn ahead 2-1. Baker again added to that score with a run of her own, making the score 3-1.

The Ichabods increased their lead even further in the fifth-inning, to 5-1. Anderson and Stallbaumer both scored again. Nearing the end of the game, Stallbaumer and Henry scored another two runs in the sixth-inning, putting Washburn far ahead at 7-1.

With little time to correct their path, the Gorillas lashed out in attempt to come back. They shot up the scoreboard, earning three runs and closing in on Washburn’s lead. At 7-4, Pitt State had one inning left to come back and win the game.

Although they managed to keep Washburn from extending their lead any further, they failed to score any runs of their own. Washburn won the game 7-4.

Keeping with her productive weekend, Stallbaumer was the first to score in the next game with Pitt State. Ashley Ruder earned Washburn another run in the second-inning, putting them ahead 2-0.

The Gorillas also managed to score a run in the second-inning, keeping the game close at 2-1. Stallbaumer scored her second run of the game in the third-inning, bringing the score to 3-1.

Washburn exploded off to a 7-1 lead in the fifth-inning. Moore scored off of a homer, also allowing Baker and Stallbaumer to get runs. Ruder added another run at the end of the inning.

Brianna Francis scored a run in the sixth-inning, marking the beginning of yet another explosive inning by Washburn.

Moore hit another homer, again getting three runners home, with Baker and Anderson also scoring runs on the play. The inning, and the game, came to a close with Washburn winning with a dominant 11-1 score.

“We’re definitely all hungry to keep winning,” said Stallbaumer. “We all came here to win, to make the program better.”

With eight and seven runs, respectively, Stallbaumer and Baker were standouts throughout these four games. Moore also stood out, hitting two homers in the final game, both of which scored three runs.

“It’s just team effort, doing your job specifically, and each teammate doing what they need to do to get the job done,” Baker said.

Up next for the Ichabods is the Missouri Western Regional Crossover with games against teams like the University of Mary and Upper Iowa University, the Ichabods will play at 10 a.m., Friday, March 16 against Minot State University.