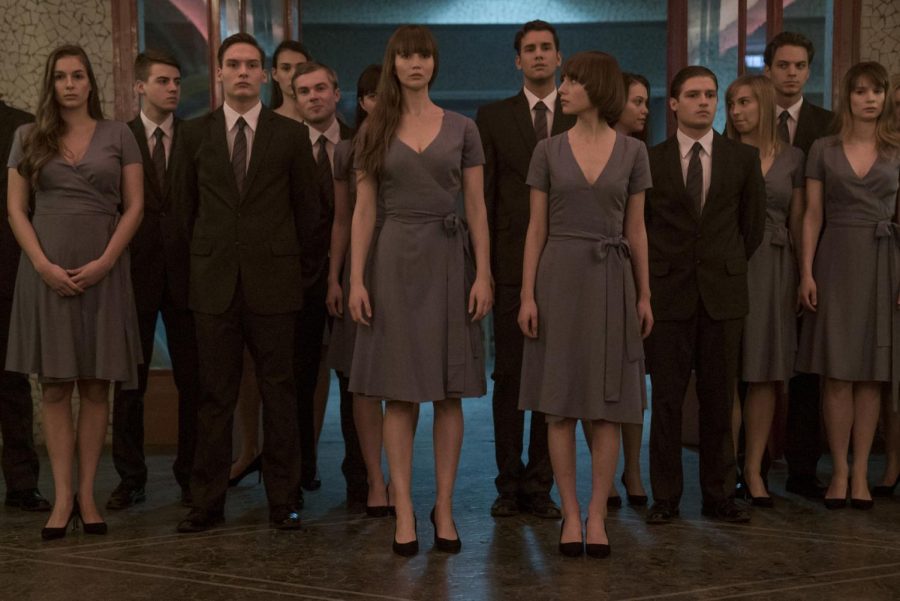 One key difference: Before starting production on the film, Francis Lawrence (the director of the film) and the film’s star met to discuss if she would be comfortable performing the nude scenes after nude photos of her were leaked online. Lawrence decided she would perform the scenes because the difference between the leaked photos and the film was her consent in the latter. In an interview with Variety Lawrence said “The insecurity and fear of being judged for getting nude, what I went through, should that dictate decisions I make for the rest of my life?”

The femme fatale is a frequently recurring side character type in many spy and espionage films, especially in “James Bond” films. The new Jennifer Lawrence vehicle “Red Sparrow” looks to switch the focus and tells the story of the troublesome origin that many of these femme fatale women have had to endure.

Dominika Egorova (Jennifer Lawrence) of the Bolshoi ballet experiences a debilitating accident and when she is unable to provide for her sick mother (Joely Richardson) she takes on a new job her uncle Ivan (Matthias Schoenaerts) offers her. She is immediately sent to a remote school where she must learn the tricks of seducing targets and enemies of the Russian government. When she is assigned to CIA agent Nate Nash (Joel Edgerton) the two find that they might be better suited to work together and maybe bring down their common enemies in the Russian government.

“Red Sparrow” takes a different approach to the slow-burn espionage thriller genre, and make no mistake, it is the slowest of slow-burn movies. The trailers would have you believe that “Red Sparrow” is going for the sort of action-thriller that “Atomic Blonde” or “The Bourne Identity” might offer. “Red Sparrow” has very little action, in fact it’s almost better to compare it to “Tinker Tailor Soldier Spy,” but without the nuance or interesting mystery to solve. In fact, this lack of purpose that the film muddles itself through is what makes “Red Sparrow” such an uninteresting watch. At 2 hours and 20 minutes, “Red Sparrow” is needlessly long for most movies, not just one that draws out truly dull moments but speeds through interesting material.

It’s not the length of the film that makes “Red Sparrow” a slog to get through, its the content within that runtime. If you’re going to make a film over two hours you must make sure that all of that time is used wisely. In “Red Sparrow” over 30 minutes of material left in the theatrical cut could’ve been removed in favor of a shorter runtime or other more interesting settings and sequences. In fact, the most fascinating events of the movie happen at the Sparrow school (the absolutely stunning Festetics Mansion in Hungary) and yet that portion of the film is only about 20 minutes or so.

The movie works fine, but there really isn’t much to be said about it that makes it a must-see addition to the spy-thriller canon. The performances are good, but nothing spectacular. Lawrence does a great job of keeping her characters depths and motivations hidden and when we see the relationship and partnership blossom between Dominika and Nash it’s hard to tell, even as an audience member, if she loves him or not, which really captures what the actual role of a sparrow is supposed to be: deception at all corners. If there’s one thing that’s lacking in Lawrence’s performance it has to be the accent. It is painfully inaccurate and inconsistent to the point of utter distraction.

Edgerton is formidable as Nash. He’s been in better things before, but he does take what is a pretty average and thinly-written CIA agent character and fills him with passion and drive to keep his contacts in Russia safe. He’s really not driven by outright love of Dominika, but of a love of democracy and diplomacy. Early on in the film he compromises his position as an agent, because he knew that if his contact in Russia was caught they would torture and kill him. It’s an secret agent type you don’t see in movies a lot. One that values the mission above his own personal gain and safety.

Other than the good performances, there isn’t much going for “Red Sparrow.” It’s overly long, the plot focuses too heavily on uninteresting parts of the story while cutting the good moments short and most of the film is just about a woman being mistreated and abused in every way possible.

“Red Sparrow” is the kind of spy movie that could’ve been left behind. It tries to create a new approach to the spy genre by casting a female lead, yet the movie falls on its face not only by not utilizing a more feminine outlook to this experience but by constantly abusing and humiliating its main character. Add on the fact the film is an overly long and meandering exercise in patience and you’ve got an end result that isn’t awful, but also isn’t something worth rushing to the theater for.