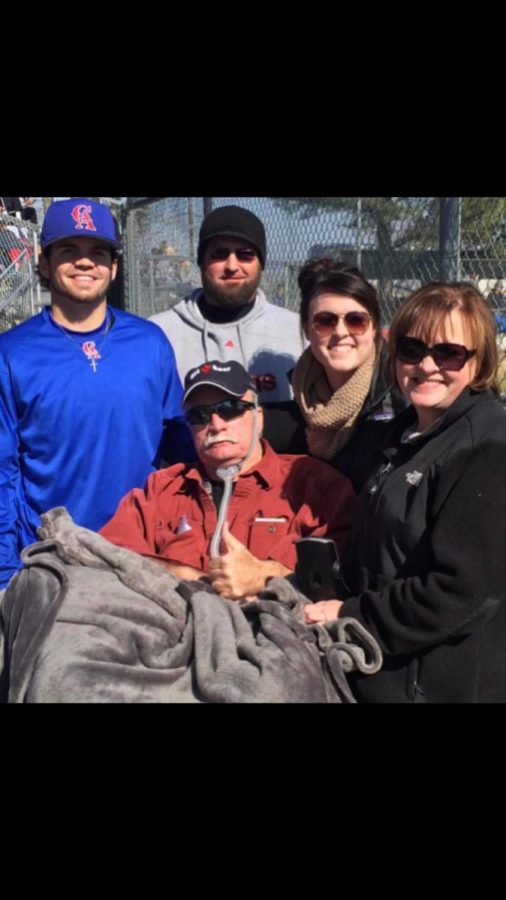 As the 2018 baseball season continues, junior Jack Christian finds himself missing something much greater when he steps onto the mound. If you look a little closer during the game, you will find the initials ‘RC’ written on Christian’s hat, honoring his father, Randy Christian.

Mr. Christian passed away last year on St. Patrick’s day after a tough battle with ALS, a neurodegenerative disease affecting nerve cells in the brain and spinal cord. This will be Jack’s first season without his dad’s encouraging texts before each game, always sent even when he could not attend in person.

Mr. Christian was described as a strong and spiritual man, and he was a strong presence in the stands. This is a tough adjustment for the junior pitcher, who recalls that his dad never missed a game throughout his childhood, including his high-school and travel-ball years.

Jack is making his debut for the Ichabods this season after spending the first two years of his college career pitching for Carl Albert State College in Poteau, Oklahoma, where he built up a record of 9-6 with 99 total strikeouts and 12 starts.

Jack says his dad was able to attend two or three games last season, doing his best to show his support even after his illness began to take a toll.

“[Being without my dad] so far has been shaky. I know he would be just telling me to keep working and keep my head up. Some things are out of your control, keep working hard and do what you do best,” Christian said.

Christian has set the goal of being the best pitcher he can on the field and helping lead the Ichabods to winning the conference championship. Below every picture of him wearing the Ichabod uniform on his Instagram page, you’ll find the hashtag #4uDad, dedicating his performance to his dad’s memory.

“[Loved ones] are always going to be there with you and watching over you even if it’s from heaven. God has a reason for everything he does. Keep your head up and just know to trust God’s plan because his plan is the plan to follow, not your own,” Christian said.

Christian’s most recent game was against Central Missouri on March 4 when he recorded a 54.00 game ERA, only pitching part of a half-inning. Christian continues to push forward throughout the season, commemorating his late father in the process.