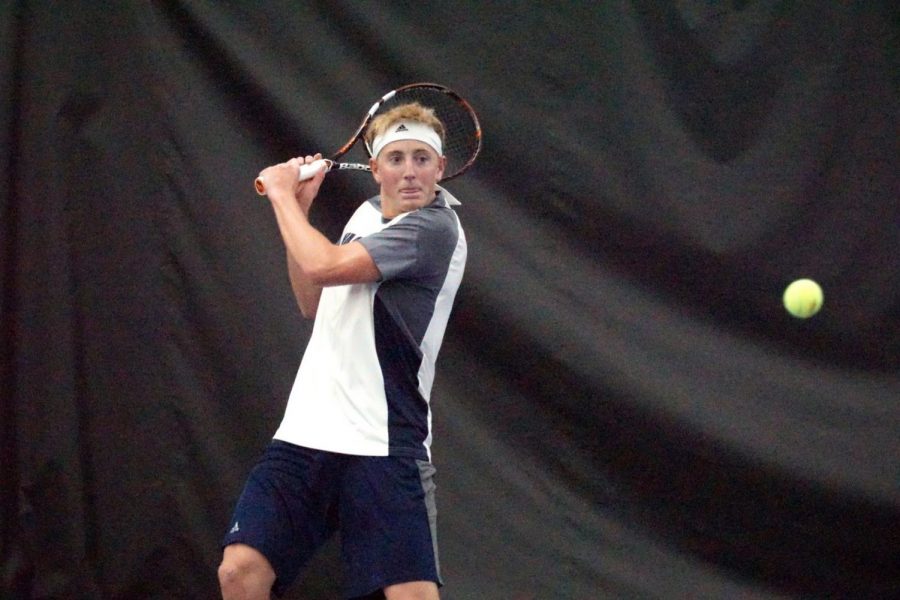 Battling the Bearcats: Senior, Blake Hunter won his singles match against Rahul Manoah in the dual against Northwest Missouri State.

The men’s and women’s tennis teams both defeated Northwest Missouri State March 7. This was the men’s first win over the Bearcats in nine years.

The men started off on the right foot by winning two of their three doubles matches. Senior Blake Hunter and junior Alejandro Valarezo destroyed Northwest’s No. 1 team 8-2. Sophomores Paul Haase and Chase Brill took out the No.3 spot 8-4.

Valarezo claimed the first victory for the Bods in singles, winning 6-1 in both sets in the No. 1 slot. Haase defeated Franco Oliva 6-3 and 6-2. Hunter fought the Bearcats’ No. 3 spot for a rollercoaster 6-3, 2-6 adn 6-1 matches, winning the dual for the Ichabods overall.

“It’s kind of been one of our goals to beat Northwest Missouri State,” said Lance Lysaught, head tennis coach. “They’ve set the standard very high. They’ve won the conference eight years in a row and they’re ranked No. 16 in the nation.”

The men were excited to see their hard work and confident attitudes secure them the win.

“We felt really good about our performance as a team,” said Hunter. “I think our toughness and grit was what gave us an edge.”

Overall, the Ichabods demolished the Bearcats with a 7-2 win. Freshmen Bradley Eidenmueller and Raul-Alin Dicu each scored wins in singles. Eidenmueller went 6-2 and 3-6 and ended with a tight tiebreaker 11-9. Dicu took out of the No. 6 spot 6-3 and 6-4.

The women stumbled a little during their doubles matches. Junior Alexis Czapinski and sophomore Logan Morrissey were the only team to pull a win as they crushed the Bearcats’ No. 1 team 8-3.

Czapinski went on to win her No. 1 singles match 7-5 and 6-1. Morrissey battled Irene Recuenco in a match that lasted over three hours. She was able to pull out a win after 6-4, 3-6 and 7-6 sets with a 7-4 tiebreaker. Sophomore Jacqueline Engelbrecht also fought for her No. 3 spot win with 3-6, 6-2 and 6-4 sets. Sophomore Madison Lysaught claimed the victory for the team with her 6-4 and 6-3 triumph over the No. 5 slot.

Most of the women were fighting illnesses as they battled the Bearcats.

“They found a way, after being down and being sick, just battling through and winning some tough, close matches,” said Lysaught. “I was really proud of our fight and the way we battled. To pull that one off was big and a great start to conference.”

Northwest Missouri was the first match against a conference team for the Ichabods. Their results from these matches will determine how they stack up in the conference tournament at the end of the season.

“It was pretty special,” said Hunter. “This was the first step towards reaching our goal of a conference championship.”

Up next the Ichabods take on the University of Nebraska-Kearney Lopers at 1:00 p.m., Friday, March 16. The Ichabods look to continue their impressive start to their season with a win over the Lopers.