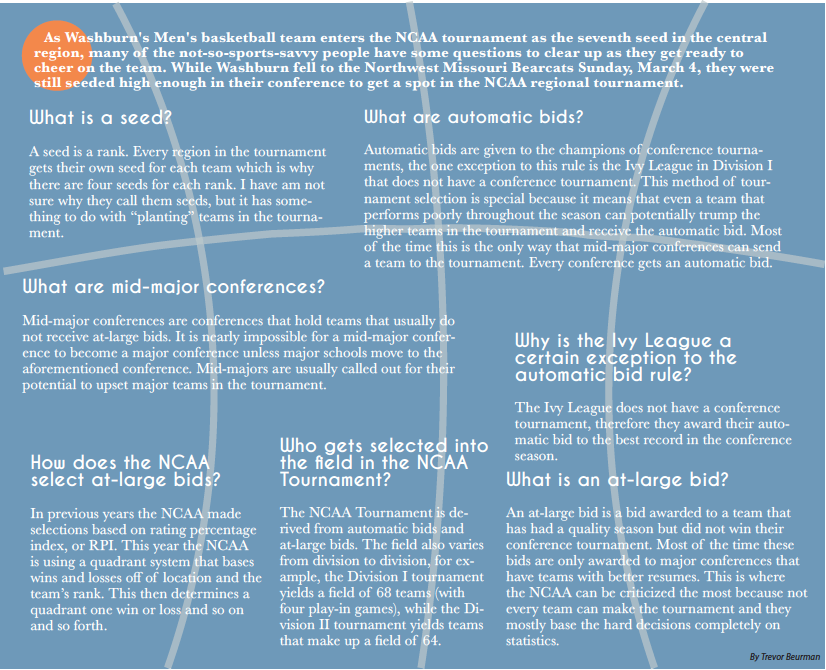 As Washburn’s Men’s basketball team enters the NCAA tournament as the seventh seed in the central region, many of the not-so-sports-savvy people have some questions to clear up as they get ready to cheer on the team. While Washburn fell to the Northwest Missouri Bearcats Sunday, March 4, they were still seeded high enough in their conference to get a spot in the NCAA regional tournament.

Who gets selected into the field in the NCAA Tournament?

What are automatic bids?

Why is the Ivy League a certain exception to the auto bid rule?

The Ivy League does not have a conference tournament, therefore, they award their automatic bid to the best record in the conference season.

What is a seed?

A seed is a rank. Every region in the tournament gets their own seed for each team which is why there are four seeds for each rank. The teams are called seeds because they are being “planted” in the tournament.

What are mid-major conferences?

What is an at-large bid?

An at-large bid is a bid awarded to a team that has had a quality season but did not win their conference tournament. Most of the time these bids are only awarded to major conferences that have teams with better resumes. This is where the NCAA can be criticized the most because not every team can make the tournament and they mostly base the hard decisions completely on statistics.

How does the NCAA select at-large bids?

In previous years the NCAA made selections based on RPI or Rating Percentage Index. This year the NCAA is now using a quadrant system that bases wins and losses off of location and the team’s rank. This then determines a Quadrant one win or loss and so on and so forth.