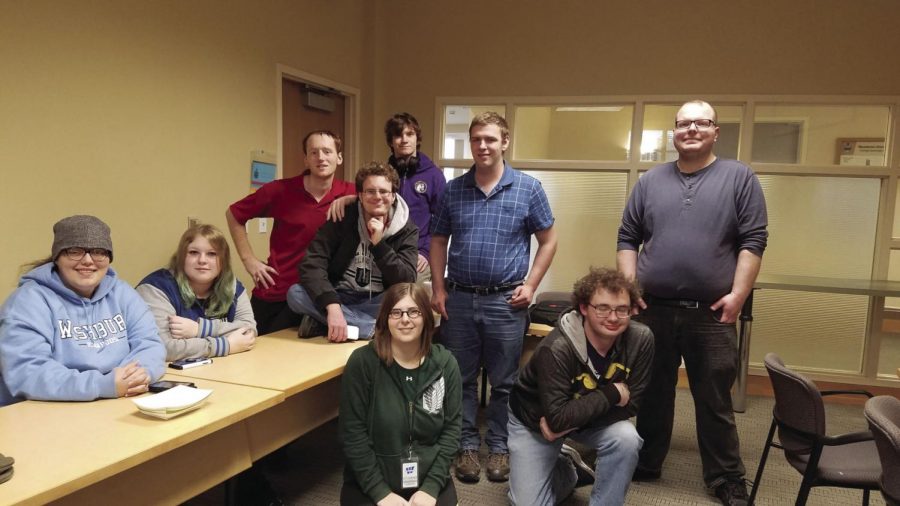 “We are they Nakama Anime Club,” Miller said. “We meet Tuesdays and Fridays from 5 p.m. to 7 p.m. here at the Myriad Room in the LLC. What we do as a club is we meet for the two hours and during the first 30 minutes of club we talk about business stuff. We are actually taking a group to Naka-Kon this year for St. Patrick’s Day weekend. So, we’re currently in the process of planning out carpooling, who is riding with who, and when we are leaving.”

The Nakama Anime Club is excited to go to the Naka-Kon Anime Convention between March 16 and 18 at the Overland Park Convention Center.

Naka-Kon is home to many activities and events such as karaoke and art contests, the charity ball, fan panels, a vendor room, a gaming room and more. This year, the Nakama Anime club will be able to join the convention, and some will be experiencing it for the first time.

“I’m very excited for Naka-Kon,” said Collin Holthaus, senior, history major “I probably won’t cosplay. I don’t have enough money to cosplay. That stuff is pretty expensive. Most likely will just wear a green shirt so I won’t get pinched. If I could cosplay, since it’s going to be on St. Patties Day, Rock Lee or Might Guy from Naruto would probably be my best bet since they are literally head-to-toe green.”

The club is lead by president Michaela Miller, junior, forensic chemical science and forensics investigations major. She discusses her plans for the convention and what the club does on a normal day.

Half way through the club, the members play games or do a craft activity. At the end of every meeting, they watch one episode of a new anime.

“It’s not just us streaming anime for 2 hours,” Miller said. “The reason we are called Nakama Anime Club is because we are trying to provide that family environment where everyone can be accepted, can talk about their favorite stuff, have a place where people who are a bit more anti-social, have a place to come and talk with people with the same interests. Just have fun. We are acceptive of anybody. You don’t have to know any anime or anything to be a part of the club. Anybody is welcome anytime, all the time.”

Naka-Kon started selling tickets in October. Those able to buy them early on were able to get a full three-day pass for $30. You can still purchase tickets at the door, but depending on the day, tickets cost between $20 and $35.

Cera Taylor, senior, communications major and a club member, commented on why she loves the club.

“I definitely come here more for the people than I do for the anime because we only watch one episode a day,” Taylor said. “It’s fun being able to come here and talk to people who generally have the same sort of interests, not the exact same interests. It’s a lot easier to make friends here in a group like this than it is to just make them in general, randomly throughout campus because we have that common interest.”

Naka-Kon with the Anime Club could be the way to start your spring break and the club would be delighted to have you. If you are wanting to join the Nakama Anime Club on their trip, you can contact Michaela Miller at [email protected]