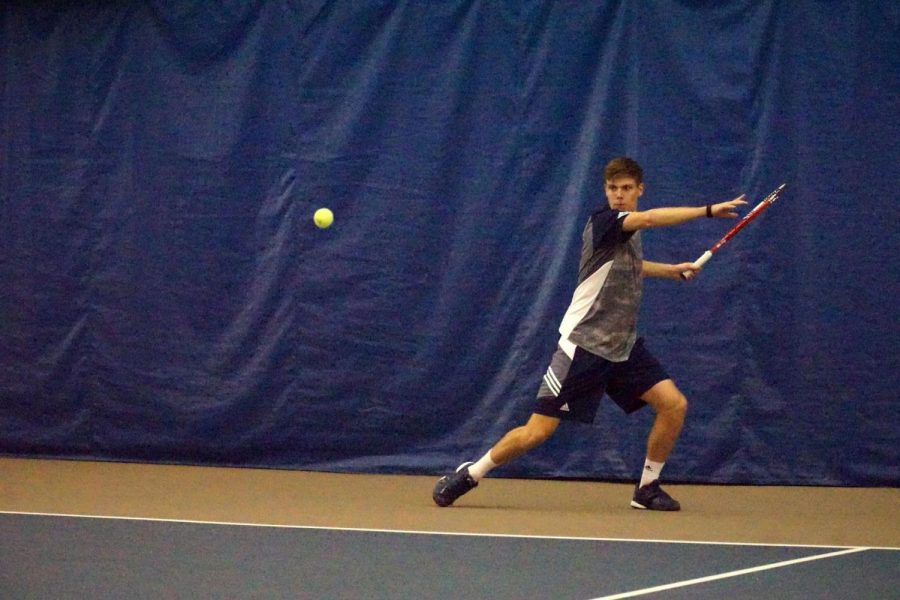 Sophomore, Paul Haase sets up a return during his doubles match against Newman.

The tennis teams earned victories over Newman University March 3 in Wichita. The women went 6-3 and the men went 8-1 overall.

Sophomore, Jacqueline Engelbrecht demolished her No. 3 singles opponent with two 6-0 sets. Czapinski defeated Newman’s No. 1 player, Liza Gerasimova, 6-2 both sets. Morrissey battled in a tight match, finishing with 6-3 and 3-6 sets and a 12-10 tiebreaker.

Overall, the women held their ground well against the Jets and are now 4-2 this season.

“We played a pretty tight game,” said Burr. “We didn’t have a lot of unforced errors.”

As they continue, the players are focused on improving and building a strong record.

“I think we have a really good shot at being top four in the conference again and being right back in the national tournament,” said Burr.

Senior, Blake Hunter and junior, Alejandro Valarezo smashed their doubles competitors 8-2. In the No. 2 slot, sophomores, Chase Brill and Paul Haase fought the Jets for a 9-7 win. Freshmen, Bradley Eidenmueller and Raul-Alin Dicu also played a tight match and pulled out a 9-7 win.

“We came out strong in doubles,” said Brill. “After we got up, we kept putting pressure on them and were able to come away with the win. Overall it was a good match.”

Dicu finished the match by quickly defeating the No. 6 spot with two 6-1 sets.

The men now have a 5-1 overall record and are feeling strong.

“As a team, I think we bring a lot of energy to every match,” said Brill. “We are a very close-knit group of guys and you can definitely tell when we walk out on the court together.”

Both teams are preparing to face the Northwest Missouri State Bearcats this Wednesday, March 7 on Washburn’s home courts.

“We haven’t had a win over them in a while,” said Brill. “I think we’re all excited to get a shot at them this year.”