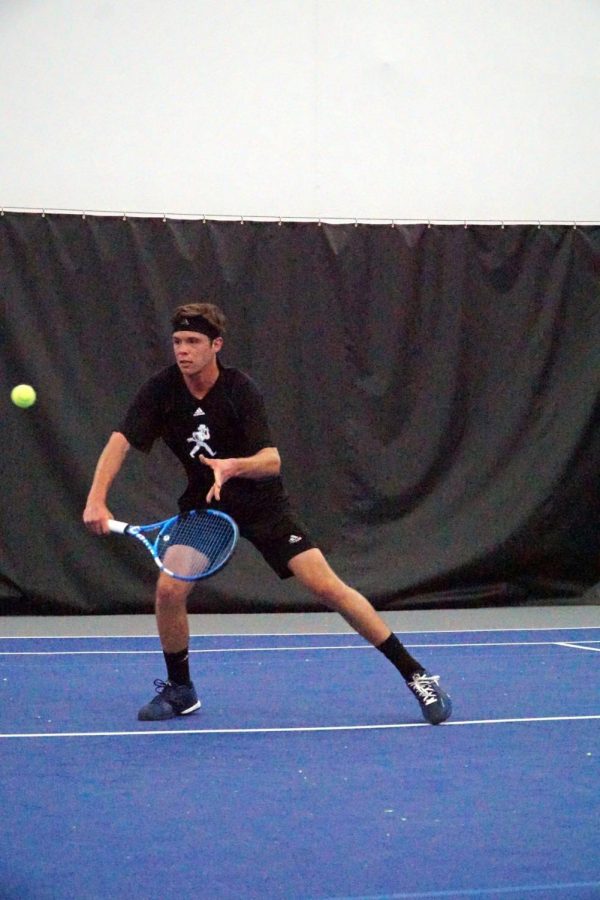 Freshman Bradley Eidenmueller slices a volley during his singles match against the Southwest Baptist Bearcats.

The tennis teams fell to Southwest Baptist University on March 25. The men suffered a 3-6 loss while the women went 4-5.

Junior Alexis Czapinski and sophomore Logan Morrissey took a victory in the No. 1 doubles spot with an 8-5 match. Sophomore Jacqueline Engelbrecht and freshman, Alysha Nowacki won the No. 2 slot 8-6.

Overall, the women plan to take their loss as a learning opportunity.

“Anytime you lose, it hurts, but there are real positives to take away from it,” said Lance Lysaught, head tennis coach. “The women’s team battled really hard and fought well. We’re seeing some positive signs.”

Freshman, Raul-Alin Dicu was the only player to pull out a single win against the Bearcats during two 7-5 sets. Hunter battled in a long match against Raul Caballero, losing the first set 6-7 with a 5-7 tiebreaker and the second set 3-6. Brill also lost his first set in a tiebreaker, falling 6-7 (1-7), 2-6.

The Ichabods are looking to improve their mindset as they continue to face competitive teams.

“As a team, we have let a few close matches go, which has hurt us,” said Brill. “Moving forward, we just need to have more confidence, that we can win tough singles matches.”

Southwest Baptist is currently ranked first in the conference with Washburn coming in third. Coach Lysaught says the loss is bittersweet.

“We’re getting close, we’re competing, but we’re not finding a way to pull out wins against those top teams,” Lysaught said. “That’s our big goal this week during practice. We’re trying to figure out what the next step is for us. We’re good, but we’re not where we want to be. We feel like we can be a lot better.”

The teams will face Lindenwood University at 2 p.m. on Tuesday, April 3 on Washburn’s home courts. The Ichabods are hoping to score a win over the Lions to improve their ranking amongst regional teams.