TPAC invites Washburn to see all it has to offer 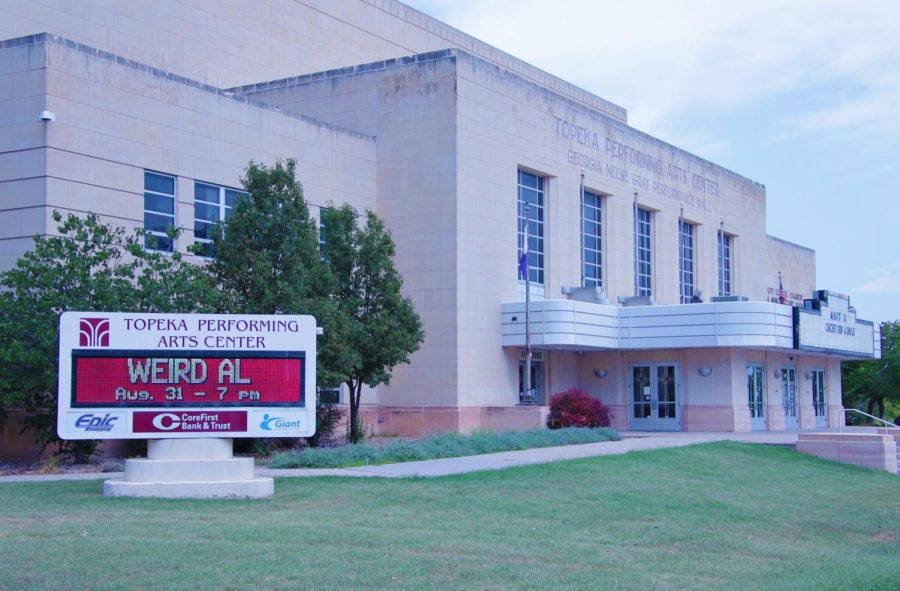 The Topeka Performing Arts Center prepares to get a little "weird" on Wednesday, August 31st. The building is located at 214 SE 8th Ave. in downtown Topeka.

For over 20 years, the Topeka Performing Arts Center has served northeast Kansas as a bastion of entertainment and cultural experiences. This school year will prove to be no different as TPAC continues to fill its hall with events that appeal to a wide variety of audiences.
However, many Washburn University students seem unaware of the full extent of what TPAC has to offer.
“I think of more like theater performances. In high school, I would hear our theater department always go to TPAC and do a few things over there,” said Olivia Ndungu, a freshman in biology. “But much further than that, I don’t think I’ve had a whole lot of experience going there.”
Other students like Skyler Smith, a sophomore in film and video, enjoy attending TPAC events, but perhaps not on a regular basis.
“Maybe twice a year,” said Smith. “I like concerts… 80s rock. I saw Styx there a few times.” And while TPAC does play host to many musical and theater shows, that barely begins to scratch the surface.
This fall alone, TPAC’s schedule includes events ranging from Disney Junior to Drag Night; from ballet to a Beatles tribute band; comedy acts, jazz workshops, hair metal, symphony orchestra performances and more.
“Weird Al” Yankovic, a multiple Grammy Award winning artist and comedy icon, will be “lowering expectations” with special guest Emo Philips Wednesday, August 31, as part of the “Unfortunate Return of the Ridiculously Self-Indulgent, Ill-Advised Vanity Tour.” For those unfamiliar with Yankovic’s brand of humor, the name of the tour might provide some insight.
TPAC also holds a “Backstage Master Class Series” for those interested in learning more about comedy writing, acting and voice. As a private, independent, nonprofit organization, it has consistently dedicated its efforts to the advancement and education of the arts throughout its existence. They regularly donate services and goods to other northeast Kansas organizations, along with doing a large amount of charity work.
When informed of some of the upcoming shows, Ndungu expressed moderate surprise. “That’s a large variety,” she said. “I had no idea.”
Larry Gawronski, executive director of TPAC, would like to see that change. Gawronski believes that if students were given more exposure to TPAC and its role in the community, they would be more inclined to take advantage of it. He spoke of developing more awareness of TPAC for students in hopes to both broaden their cultural horizons and further enrich their college experience. Additionally, the possibility of a discount for Washburn students is currently being discussed, although nothing official has been implemented at the time of this publication.
“There’s so many things, so many layers to what we do,” said Gawronski. “I’m looking forward to forging a new and better relationship with Washburn University.”
TPAC in its current form has existed since March 1991, but its origins can be traced back to the late 1800s. Georgia Neese Gray, an actress in the 1920s and TPAC’s “leading lady,” also served as the first female U.S. treasurer. Legendary artists such as Nat King Cole, Count Basie and Elvis Presley have all entertained audiences here in Topeka at the Municipal Auditorium- TPAC’s spiritual predecessor- and that tradition carries on today.
To learn more about TPAC’s history, contact information, services and full schedule of upcoming events, visit their website at www.topekaperformingarts.org.
Edited By: LeSha’ Davis, Simran Shrestha