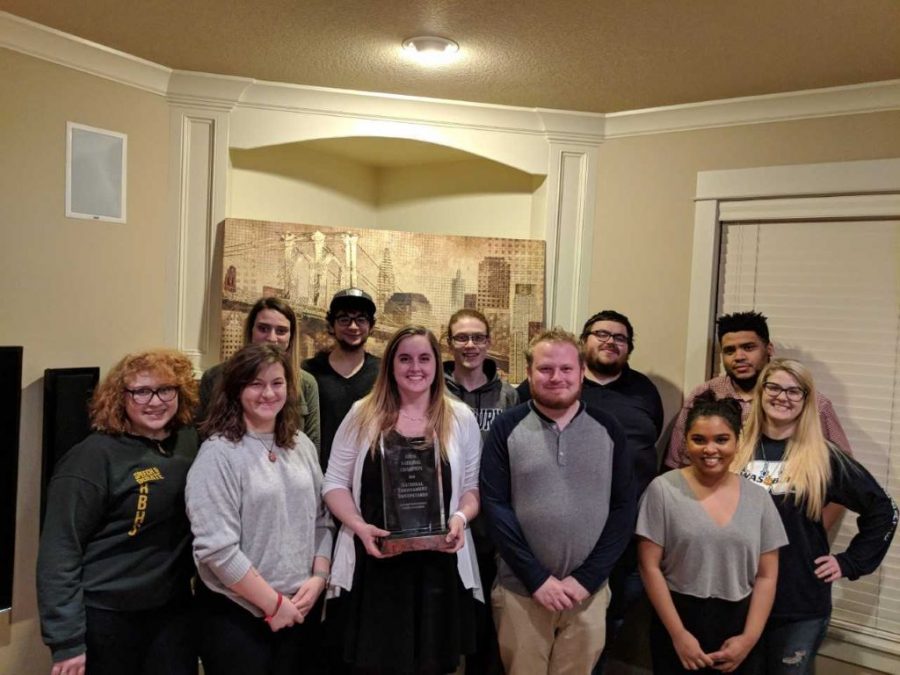 Washburn Debate stands together with their national championship trophy. The team brought home its fifth championship since 2010.

The debate was hosted by the Lewis & Clark College in Portland, Oregon and included 46 schools participating in the largest national intercollegiate debate competition in the United States. Washburn Debate has had a tradition of winning the NPDA Squad Championship since 2010, and this year was no different.

In a tight victory, Washburn Debate continued its success by winning the Overall Squad Sweepstakes National Championship for the fifth time since 2009, beating runner up, University of California, Berkeley, 34 wins to 33 wins. The championship is scored based on the performance of each squad’s top four teams.

Hockett, a marketing and management major felt that this year the squad has been very good together.

Despite the loss, Hockett is happy with the outcome.

“When I first started on the team, I never ever would’ve thought I would be in the semifinals of a nation tournament,” Hockett said. “So I’ve definitely grown over the years with the help of our coaching staff, specifically Stephen Doubledee who’s been very helpful development me as a debater and as a person.”

The Washburn debate team’s performance in these debates means they remain a great source of pride for both the school and its students, as well as to continue a legacy that could inspire future debate teams to victory.

“We’re all really happy to be Ichabods and happy that we can provide another national championship for the university,” Hockett said.