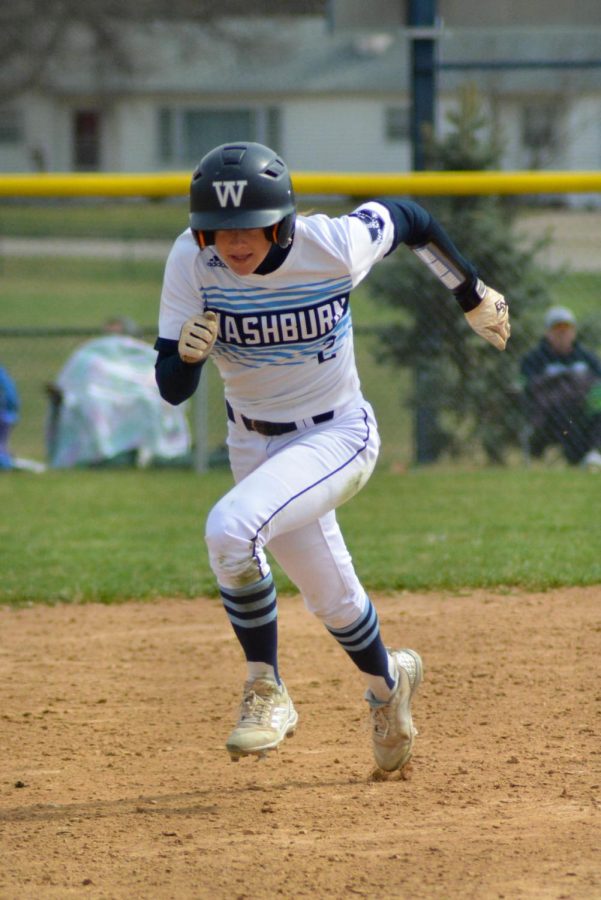 Taking off: Junior outfielder Samantha Stallbaumer takes third base to score in another run against Emporia State at the Washburn Softball Complex.

The first game March 30 was 4 p.m. started out slowly for both teams as they looked for offensive momentum. Eventually, the Ichabods were the first to hop on the scoreboard with a solo home run from junior infielder Savannah Moore.

The Ichabods were the victors in this first matchup with a 4-0 final score.

The 6 p.m. game was a very similar contest to the day’s first. Washburn got their bats going early with an RBI single from Francis that brought in runs from both Baker and junior outfielder Samantha Stallbaumer.

The third inning was where the Ichabods sealed the deal. In the third, Washburn scored four hitters to set the score at 6-0 and after that, surrendered only one run.

This game ended with a Washburn victory as well, and was the first time Washburn has taken a double header from the Hornets since 2002, posting a final score of 6-1. The Ichabods at 1 p.m. to the field March 31 for the final two games against the Hornets in this series.

The first game was an Ichabod slugfest. Washburn scored all eight of their runs in the first two innings, enacting the run-rule on the Hornets by the fifth inning. The final score was 8-0 with great performances across the board.

One answer from the Ichabods was a game-tying two-run homer from freshman designated hitter, Lenae Salinas.

“[The two-run homer] was really big. I think that it did give us some momentum and we wanted to come back, but some things do not go the way you want them to,” Salinas said.

That was in fact the case against the Hornets as the Ichabods battled to the very end, yet came up short with 7-9 final score.

“It is mostly a mental state. I get in the box and say ‘I’m not going to let this pitcher take over,’” Francis said.

Up next for the Ichabods is a series against University of Nebraska at Kearney with games at 1 p.m. and 3 p.m. Friday, April 6. The Ichabods will look to stay on top in MIAA rankings with wins Friday against the Lopers.