Imposter syndrome: the who, what and why 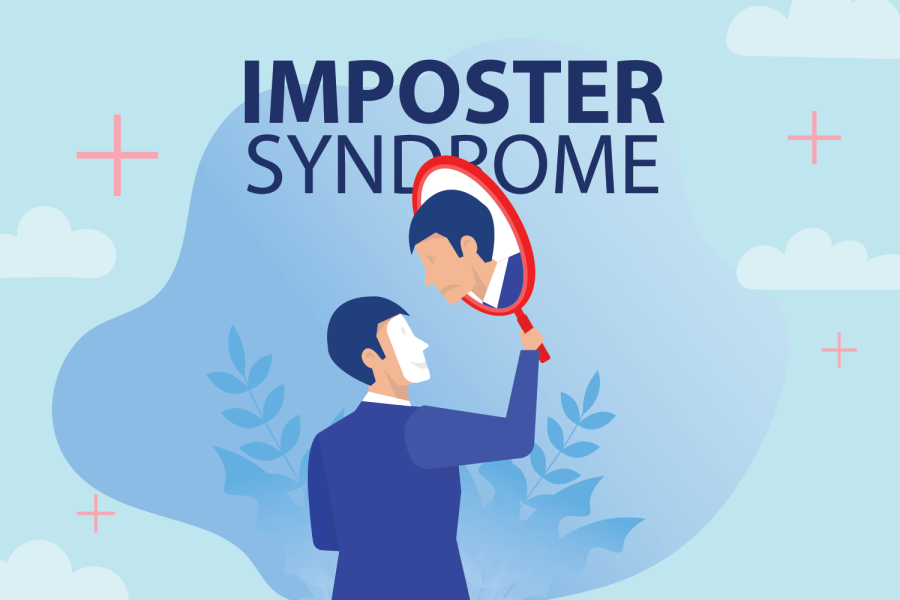 Imagine being great at something or excelling in a particular class when suddenly, a wave of doubt hits and an overwhelming fear of being exposed as a liar ruins the day. This feeling is surprisingly common– especially in the case of Sean Lavin, a senior technology administration student.

Imposter syndrome is most easily described in individuals who– regardless of their successes– discount their accomplishments or skills. While it’s not recognized as a mental health disorder in the DSM-5 (a diagnostic manual used by mental health professionals), it can leave students feeling paralyzed by intense self-doubt.

“It’s just this feeling of knowing everybody else gets what’s going on here in class,” Lavin said. “Everyone else gets it, or they just way surpass me. I start feeling like I don’t belong, like I’m a fraud, and then I start getting afraid.”

All technical administration classes are remote by nature to a degree and have been since before the pandemic. Lavin is very familiar with discussion board interaction on D2L (an online learning platform) either every week or every other week.

“I’ll start reading people’s thoughts for class and I’ll start freaking out internally,” Lavin said. “If I start reading posts and they’re really well written, I realize these people really know what they’re talking about and it makes me start questioning everything I think I know.”

Valerie Mendoza is a project director for the Department of Academic Affairs at Washburn. She oversees the Title III Strengthening Institutions grant and organizes success coaches from the Center of Student Success and Retention. These coaches are designed to help students graduate and they frequently discuss imposter syndrome to faculty and students.

“Imposter syndrome is when you don’t feel that you are equipped, or deserve, to be wherever it is you’re at, like a student at Washburn, or a faculty member, or at your job, whatever that may be,” Mendoza said. “A student might think they got to Washburn because of a mistake or a fluke and soon they’ll get caught and embarrassed and have to leave. I think it goes hand-in-hand with anxiety.”

While Mendoza and other success coaches listen to students describe feelings that strongly relate to imposter syndrome, she almost never hears a student directly identify it as such.

“So many people feel this way. It’s common, but people just don’t know that there’s a name for it,” Mendoza said. “So, myself or the success coaches will explain imposter syndrome to them and say, ‘You’re completely normal. Many others feel this way. You, in fact, do belong here and there was not a mistake made in admitting you to Washburn.’”

For students like Lavin, battling with imposter syndrome fluctuates between good and bad days. When the intense self-doubt hits, time that Lavin could’ve spent on assignments is instead used to argue the validity of his enrollment at Washburn.

“I see people walking around campus and they walk with such purpose,” Lavin said. “Like, all they’re doing is walking to their car, or to their class. But in your mind, when you have imposter syndrome, it’s more than just that. These people, like, really know what they’re doing and what they’re here for. And here I am asking myself what I’m doing, like really doing.”

Based on his experiences, Lavin believes that low self-esteem and perfectionism helps fuel these feelings of inadequacy during the moments it rears its ugly head.

“Like, I know I’m smart enough to be in my classes, but when other people are just getting more of the content than I am, it makes it more apparent that I feel out of place or don’t belong,” Lavin said. “I remember one day I was driving home and I literally asked myself, ‘When am I gonna be good enough?’”

Mendoza recommends focusing on positivity for those in the midst of battling self-doubt. In her WU 101 classes, Mendoza asks her students to write down three things they did well since they last met. Celebrating the wins, no matter how small, is her key to success.

“It kind of flips the script,” Mendoza said. “Some of our coaches go so far as to email students with motivational quotes or motivational videos, you know, to just help them get over that hump.”

Mendoza stresses that imposter syndrome can affect anyone and begin at any point in one’s lifetime. Whenever a student talks to Mendoza about feelings related to imposter syndrome, she might recommend them to Counseling Services or simply chat about positive experiences and reaffirm those events.

“There’s no overarching solution that helps everyone through this,” Mendoza said. “I might tell students, ‘Look at where you started and look at where you are now.’ People tend to focus on negative things, so pointing out positive things really makes a difference.”

In Lavin’s case, he is one of many Washburn students who has a personal connection to imposter syndrome. He didn’t know this cycle of self-doubt had a name or was so common among others until a few years ago. Lavin said this awareness made it easier for him to handle the battles of self-acceptance he’s had since then and also made it easier to make that infamously difficult step towards seeking counseling.

“When I realized that I wasn’t alone in feeling this, I felt so much better,” Lavin said. “I’m not alone. You’re not alone. Whether they want to admit it or not, a lot of people feel this way.”

Lavin recommends that anyone who feels as if they identify with having imposter syndrome should find someone to talk to, whether that be a friend, a family member, a professor or a counselor.

“Don’t be afraid to talk to people or reach out,” Lavin said. “Ask for help and actually, like, love yourself for once, for God’s sake, because it’s a vicious cycle and you deserve to be loved.”