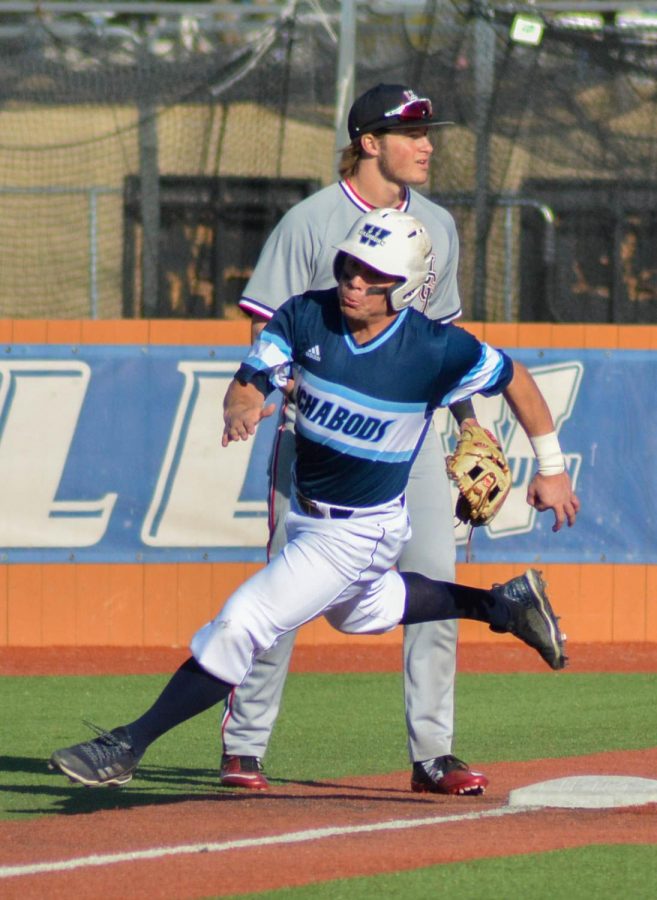 Senior Bowe Behymer rounds third base to score a run at Falley Field against an MIAA opponent.

Mother nature finally gave the baseball team some good weather as they faced off at home with one of their biggest rivals. The Ichabods took Game 2 of the series in front of a full house at Falley Field, scraping up an 8-7 win against the Emporia State Hornets last Wednesday.

Brock Gilliam was credited with the win for a solid six-inning performance, but Matthew Hicks got credit for the relief for coming in to close the Hornets out in the last three innings.

Standout players include dynamic duo Brady Hoover and Josh Crosby, who both went 3 for 5 at the plate. Crosby crossed the plate three times, twice off Hoover’s hits, and Hoover reached home twice himself. The pair accounted for four of the eight total runs for the Ichabods.

They also credit the rest of their lineup, including Javis Larson and Darian Abram, for putting them in position to get those much needed RBI’s.

Crosby admitted the season isn’t going as smoothly as it could be, but he hasn’t given up hope, and thinks the win will be a good motivator going into the rest of their games, including Game 3 against Emporia that’s scheduled for Wednesday, April 25.

“[The team’s record] isn’t what we would have preferred it to be, we’ve given away quite a few games. But it is what it is, and we gotta make the best out of it and continue to have fun and do our best for the rest of the season,” stated Crosby.

Hoover thinks that consistency is the greatest improvement the Ichabods can make in order for a comeback in time for the postseason.

“Some days we’ll play super well, like today, then other times we can’t even recognize our team because we aren’t doing so hot. If we find a way to come out with a win during those close games, our record would be a lot better” said Hoover.

The Bods traveled to Hays, Kan., later in the week to face off in windy weather conditions against the University of Nebraska at Kearney, falling 3-6 in the first game of the series held Friday and splitting the double-header on Sunday.

Despite taking a 10-17 loss in the first game, the Ichabods were able to come back and take UNK down 12-11 after a close offensive battle between the teams.

“Our goal for the rest of the season is to finish stronger than we started,” Hoover said.

The Ichabods will have a chance to do just that when they play their next series scheduled to be in Bolivar, Missouri against Southwest Baptist University beginning Friday, April 20.