Are you wearing Denim Today? Denim Day celebrated at WU 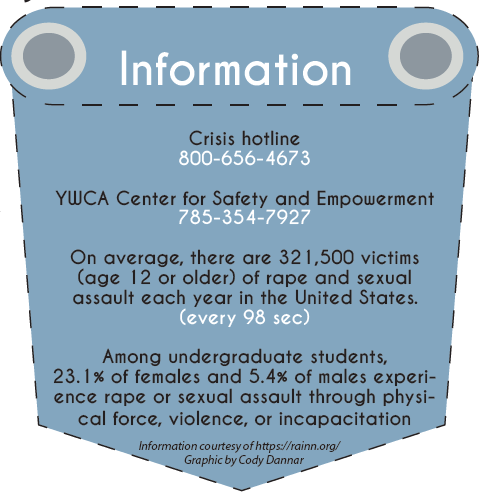 Denim Day first came about in 1999 following a court case in Italy centered around an 18-year-old woman who was raped by her driving instructor. The 45-year-old man was convicted, but the appealed his sentence and the ruling was overturned by the Italian Supreme Court on account of the victim’s jeans being too tight. It was decided that she would have had to help the attacker get the jeans off, implying consent. In a stand against this ruling, women in the Italian parliament came to work the next day sporting denim jeans.

Denim Day is now globally recognized and people wear denim or teal on Denim Day to stand in solidarity with sexual assault victims. More information about the case and history of Denim Day can be found at denimdayinfo.org.

“It’s devastating that this was the outcome in that case, but it’s amazing that from that, this movement has been created,” said Molly Steffes-Herman, campus advocate of counseling services.

Sigma Phi Epsilon fraternity and Delta Gamma sorority are doing a Live Your Oath day on Denim Day as well, and will have various different events going on throughout the day leading up to Tarana Burke’s visit to campus.

Tarana Burke, civil rights activist and founder of the #MeToo movement, will speak at 7 p.m. Wednesday, April 25, in the Georgia Neese Grey Theater.

There will be a Denim Day photo contest opportunity in which any Washburn student organization can send a picture of their members wearing teal and denim to [email protected], to win lunch for up to 10 people.

To creatively raise awareness, Shelly Bearman, project coordinator for Sexual Assault Education and Prevention, has started getting students around campus to decorate pennants of denim that will be put into a mural to be displayed on campus. It might be hard for someone who has experienced sexual assault, to come out and speak about it, but it’s much less difficult to throw on a pair of jeans.

“It’s a really easy, yet impacting way for people to show support. I would hope that if you are someone that has unfortunately had to experience any kind of harassment or sexual violence, that if you were a part of a community where you saw a lot of people taking part in a thing like Denim Day that you would feel supported”, said Joel Bluml, associate vice president for student life. “There are so many things that happen to students over the course of their time in college that happen outside of the classroom that can affect college success, and certainly sexual assault is definitely one of those things that can have a very negative impact on someone getting back on track to where they were going before that happened to them. We are aware of that here at Washburn, we have a lot of resources, policies, and people in place to try to help people find that power and come back strong from it,and Denim Day is one way we can show that support,” Said Bluml.