The Washburn Review • May 5, 2022 • https://washburnreview.org/39402/sports/baseball-falls-to-pitt-state-in-regular-season-finale-finishes-5th-in-miaa/ 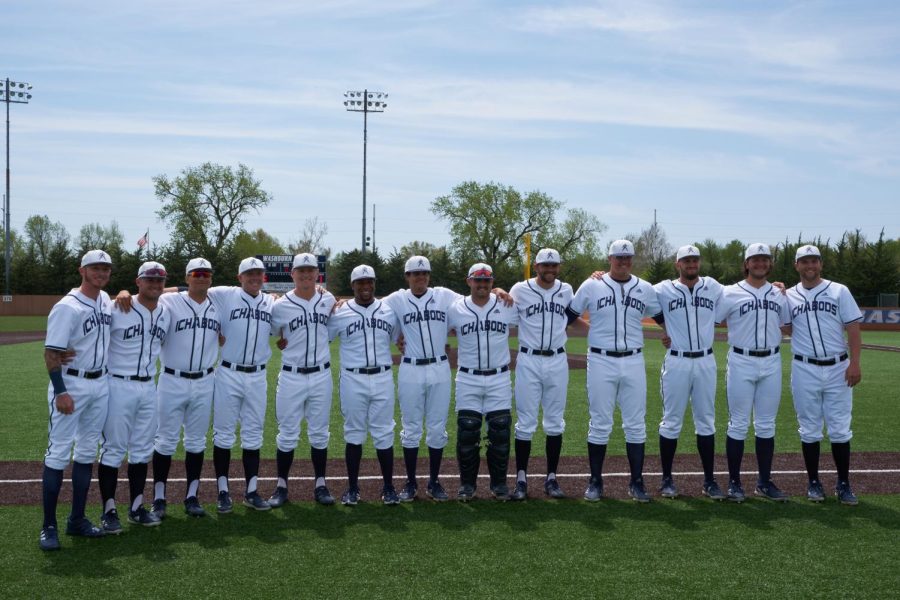 Washburn baseball’s regular season won’t end the way they wanted it to after a 13-2 loss to Pittsburg State in the series rubber match.

A combined 14 walks and hit batters did the Ichabods in, as they only managed five hits and dropped to 19-14 in MIAA play.

“I think today summed up exactly what we have been struggling with the last 14 or 15 games,” said head coach Harley Douglas. “We don’t know what team is going to show up hitting wise and we don’t know who is going to pitch and throw strikes out of the bullpen and compete for us.”

The game also served as Senior Day for the team’s 13 departing players who were recognized prior to the game.

“It’s meant the world to me, it’s not about the place, it’s about the people, and that’s what makes Washburn University so special is the people, so it’s been an absolute pleasure and an honor to be playing here at Falley and I’m going to miss it every day,” said senior Tyler Clark-Chiapparelli.

The team moved to 29-18 after the loss and the conclusion of the regular season, the most for the program since 2016.

“They have been huge, just the resilience, you know we battled a pandemic and we went through it and stayed close together … you finally get a full season, and to be able to get that and have 29 wins and still be kind of considered in a regional setting it’s a great opportunity,” Douglas said.

They will look to put the final regular-season result behind them and prepare for postseason play against the University of Central Oklahoma.

“And I think today it [the team’s problems] just kind of came to a head and I think hopefully we see that and what we got to work on this week and get ourselves prepared to go down to UCO,” Douglas said.

Going into the day, the Ichabods already knew they would finish fifth in the MIAA, setting up the first-round matchup with the Bronchos, who took two out of three from Washburn earlier in the season, beginning May 6.

“I think if we can compete and go with it then it will be a great series, but if we come out and play like we did two of the three here and two of the three against them then we will be coming home Saturday for sure,” Douglas said.

The Ichabods started the scoring, with one in the bottom of the first on a sacrifice fly from Clark-Chiapparelli after a triple by Brett Ingram to lead 1-0 after one.

The Gorillas didn’t score on Jack Brimacombe until the third, getting three runs all with two outs. Three singles, a walk and hit batter brought home two runs to take a 3-1 lead.

A second hit batter, coming with the bases loaded, brought in a fourth run and brought Rane Pfeifer to take over on the mound.

Washburn loaded the bases with no outs in the third, but scored only one run on a single from Quinn Waterbury.

Pitt State scored one run on an RBI groundout after a walk, hit batter and bunt single to make it 5-2.

Free bases continued to hurt the Ichabods in the fifth, walking the bases loaded before two runs scored on a single. Jake Schroeder took over on the mound, recording the final three outs to keep it at 7-2.

Five more pitchers took the mound over the final three innings for the Ichabods, as Pitt State scored once in the seventh and four in the ninth to win 13-2 as Washburn managed only two hits after the third inning.

Ingram and Waterbury combined for four of the team’s five hits, with both of Ingram’s going for extra bases. After the loss, tournament play will be critical for the Ichabods’ postseason hopes past the conference tournament.

“We are focused on next week and trying to win a conference tournament and make a regional,” Clark-Chiapparelli said.

The best of three series against the Bronchos will begin May 6 at 6 p.m. in Edmond, Oklahoma.