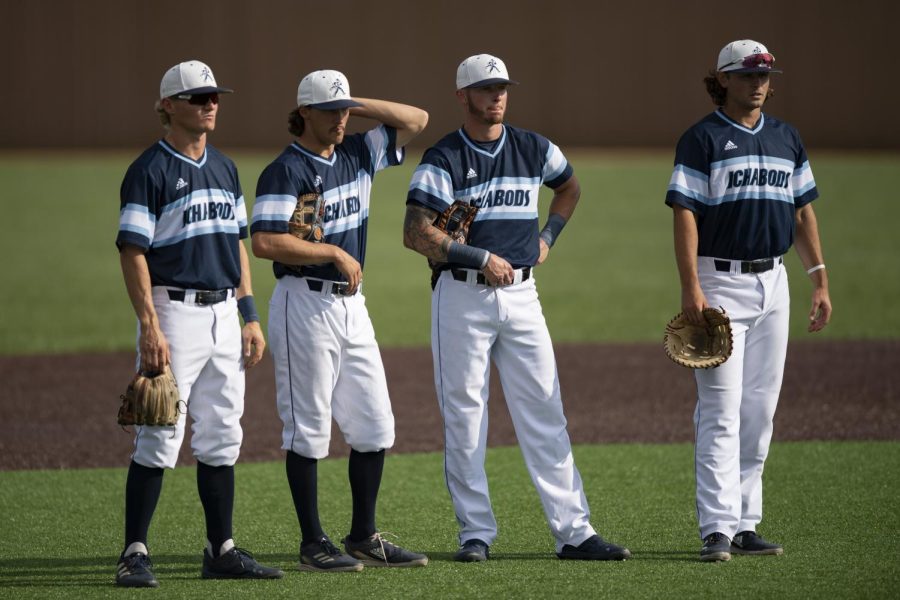 Washburn players wait in the infield Friday, April 29, 2022, at Washburn University in Topeka, Kansas. Washburn lost to Pittsburg State 14-3 in the game.

Going into its final regular season home series, Washburn baseball knew it probably needed a sweep in order to host an opening round of the MIAA tournament.

After a 14-3 loss to Pittsburg State where the Ichabods surrendered 17 hits, those hopes were all but gone as Washburn managed only six hits.

“There’s not a lot of leadership going on right now where we’ve got a chance to go out and solidify ourselves in a regional setting, and we are just along for the ride I feel like,” said head coach Harley Douglas. “We didn’t compete to that point.”

The short seven-inning contest drops the Ichabods to 28-17 on the year and 19-13 in MIAA play as they will try to even the series April 20.

“Tomorrow’s a new day and we need to go out and re-group and get after it and it will be interesting to see what we come back with,” Douglas said.

Both teams were even through the first three innings, with sophomore Casey Steward on the mound for Washburn allowing only two hits.

A one out walk in the fourth for Pitt State was followed by a double, scoring the game’s first run. The Gorillas laid down back-to-back perfect bunts, both going for hits to score another run and added a third with a single up the middle.

The run continued with two outs as Pitt State shot a single into left field, knocked down by the wind to score two more runs and a double to the same place scoring another to make it 6-0.

“We were just behind in a lot of counts, and didn’t make good pitches when we did get ahead in counts … they were able to do some bunts and do some stuff to get people moving,” Douglas said.

The Ichabods cut the lead in half in the fifth inning, starting with an RBI double from junior Cale Savage off the left field wall. Senior Tyler Clark-Chiapparelli picked up another RBI on a single hit high in the air into right field.

Junior Cal Watkins completed the scoring with a sacrifice fly into right field, making it 6-3.

The Gorillas got hot again in the bottom of the fifth with two triples in the first three batters, scoring a run.

Back-to-back singles scored two more, making it 9-3 as Steward exited and freshman Jake Schroeder came on to throw and finished off the inning.

Senior Braden Babcock took over pitching in the seventh as Pitt State loaded the bases with just one out. Senior Trevor Marreel came on to pitch and the Gorillas were able to clear the bases on a two-run single and one-run double.

“We go to the pen and … didn’t get ahead of hitters so when you do that against a really good hitting team they are going to make you pay,” Douglas said.

A pair of two-out singles scored two more runs, giving Pitt State a 14-3 lead. Washburn would go down quickly in the bottom of the seventh, ending the game after seven with a 10-run rule.

“Very bad approaches at the plate. I thought we tried to do a lot of things that we probably shouldn’t have … we start trying to fly off and drive balls trying to hit them out in 40 mile per hour wind,” Douglas said.

Steward moved to 5-2 with the loss and the Ichabods six hits were spread out among six players, with Watkins and Savage adding an RBI to their hits.

Game two of the series will take place April 30 beginning at 2 p.m.