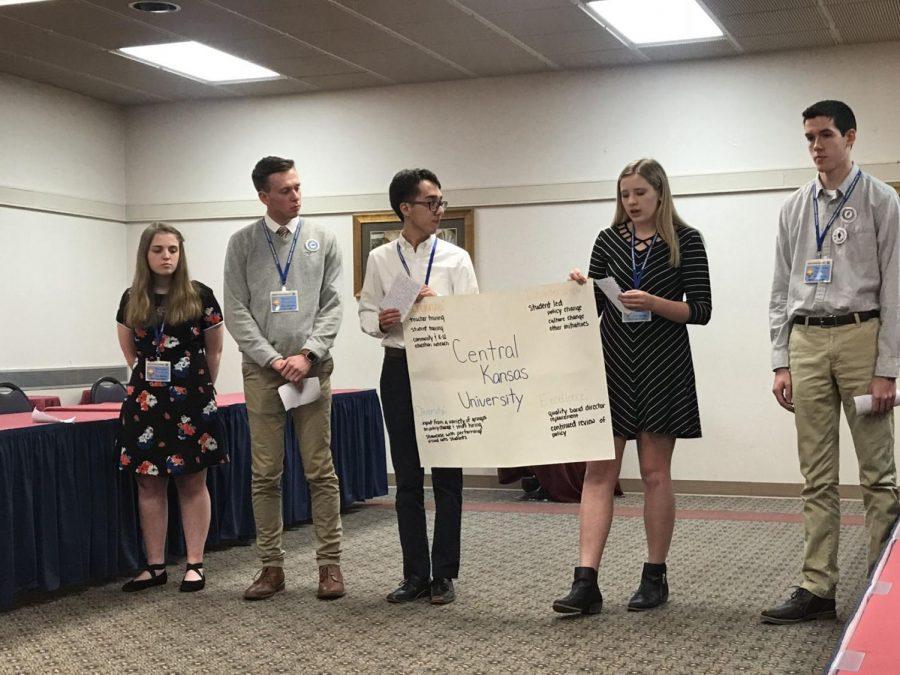 Students from Emporia High School explain how a more involved community are part of a solution to stopping hazing incidents. Emporia presented as the student government solving a hazing problem at the fictional Central Kansas University.

When students at the 2018 Leadership Challenge Event were tasked with solving a college’s out of control hazing culture, they were handed a real and relevant problem.

With at least 4 hazing-related deaths in 2017, 40 in the past decade and research showing at least one hazing death a year since 1961, hazing is a growing epidemic across U.S. campuses.

Every year since 2011, Washburn students have been a part of this two-day leadership event, which includes role-playing and simulations, along with various speakers, a banquet and various team building activities. Students interact with community members in networking programs on the first day, but it is the second day and the leadership simulation that Director of the Washburn Leadership Institute Michael Gleason calls “one of a kind.”

This year, 36 teams comprising high school and college students from across the Midwest met April 6 and worked in groups to suggest solutions for a hazing simulation in the marching band on the fictional campus of Kansas Central University.

Students were shown videos that set the theme for the challenge, as well as interactions with live role-players who prepare the teams for the collaborative challenge of solving the given problem. The groups then presented their plan in front of judges and are given feedback.

“Through the feedback provided to teams, my hope is that they have the opportunity to process and grow, and ultimately be more effective,” said Gleason.

Past simulations have included school shooting responses, assembling an emergency management team for a community hit by flash flooding, and encouraging economic development for a town. This year’s hazing challenge is meant to interact with a “relatable, prevalent topic in today’s society and address a deeply rooted culture” in schools, said junior sociology major Abby Price, a 2018 LCE fellow.

While all student groups work through the same simulation.

“This year was the first year that we had the high school and the college students experiencing the same problem from 2 different perspectives,” Price said.

College students acted as the school administration, while the high school students role-played as the student body government. The Leadership Institute has been planning this year’s simulation for over 11 months, according to Price, and over 200 volunteers throughout Washburn and the community came together to make the event possible.

Claire Leffingwell, a sophomore psychology major and LCE Volunteer Coordinator, hoped students walked away from the event with “the confidence they gain in knowing they could take these skills back.” Leffingwell mentioned that for many participants, especially the younger individuals, the experience was “overwhelming,” and they often walk out feeling like “oh my gosh, we just did that,” and have the ability to take those skills on with them.

For a lot of individuals involved, the event is strenuous.

“[It can be] emotionally taxing, but in the best way, because we feel so passionate about it,” Leffingwell said. “It’s these student’s experiences that are 100 percent impacted, and we care so much about what they think and they gain from it.”

Gleason said the event contains a mix of emotions and high-pressure situations, and that it sometimes really challenges students’ thinking.

“Students feel like they can go beyond self-imposed limits of ‘what you can do,’” said Gleason. “Advisers rave and say the same thing.”

“The purpose of the Leadership Challenge Event is to give skills and improve upon the ones they already have,” Price said. “The event gives them a safe space to do that.”