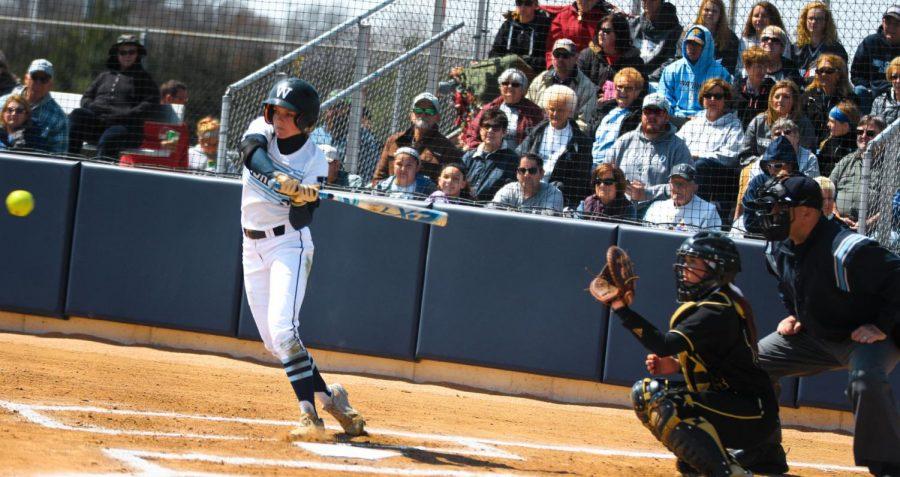 Slap happy: Junior outfielder Samantha Stallbaumer leads out the batter box for a slap shot at the Washburn Softball Complex.

The Washburn softball team had a double series last week which saw it squaring up against the University of Central Missouri and Southwest Baptist University. The Ichabods played the Mules April 12 and the Bearcats April 13.

The first game of the series with UCM began at 1:30 p.m. to kick off the week. This game featured a tough matchup for the Mules who faced currently undefeated junior pitcher Megan Deiter, who currently sits at 16-0 for the season.

Deiter did not disappoint as the she racked up nine strikeouts in seven innings and only allowed three hits. Dieter also became the single-season strikeout leader in the NCAA-era for the Ichabods after she earned her 162nd strikeout.

The Ichabods easily put away the Mules in the first game, putting up runs in the first and fifth innings in sets of two. The Mules never could answer back with the shutout pitching from Deiter.

The final score of Game 1 ended at 4-0, with Washburn lengthening their lead in MIAA conference standings. Washburn then had to take on the Mules directly following their shutout victory at 3:30 p.m.

The next game saw sophomore pitcher Lexi Crabtree head up to the mound. The game gave the Mules potential for revenge after their shutout loss earlier in the day. The Ichabods scored only once in this game with one run in the second inning.

The Mules scored twice with runs in the fourth and eighth innings, as this game took extra innings to decide. A notable Ichabod performance in this game came from senior pitcher Kelsee Henry, who ended up playing a saving role pitching 6.2 innings with four strikeouts.

Unfortunately, Henry did not earn the save as the Mules won in extra innings. The final score of this game was 1-2, with the Ichabods dropping their second game in this conference powerhouse matchup.

The next series for the Ichabods was against the Bearcats of Southwest Baptist University at 1:30 p.m. April 13. The first game of this series saw the Ichabods’ bats come alive throughout the entire affair. Megan Deiter also added another shutout to her impressive resume.

The Ichabods destroyed the Bearcats in the first game with four runs in the second inning, one run in the fourth inning and three runs in the fifth inning. The Ichabods forced a run rule victory in this one as the Bearcats had no answer for Deiter’s impressive performance and the collective bats of the team.

The final score saw the Ichabods take an impressive victory of 8-0 in a five-inning run rule. The Ichabods then came back to play the Bearcats for their second game at 3:30 p.m.

This game was a much closer contest with the Bearcats looking to bounce back from a poor start to the series. This game was a back-and-forth battle on both sides.

{{tncms-inline content=”&lt;p&gt;The Ichabods can clinch the MIAA regular season title with a win on Thursday or Friday. Washburn has won only one regular season title in the MIAA in the entirety of the program’s history which was in 2002.&lt;/p&gt;” id=”f10aa379-50e3-4009-bb7d-dea71ee4e7c9″ style-type=”question” title=”Did You Know?” type=”relcontent”}}

“I just get up to the plate and say, ‘I’m going to get on. This pitcher is not going to stop me.’ and since I have a high batting average it just helps,” junior outfielder Emilee Baker said.

The final score of this game was 4-3, with the Ichabods winning thanks to a walk-off home run in extra innings by Kirk. This sets the Ichabods at 36-9 for the season and 20-2 in conference, and they have recently received two votes to be ranked nationally.

“I think we just continue to fight, every inning and every out. And the last couple of innings we did the little things right,” Kirk said.

Up next for the Ichabods is a double-header against Missouri Western State University at 2 p.m. and 4 p.m. Friday, April 20, at the Washburn Softball Complex. The Ichabods hope to break the national poll barrier as they continue to power through the season.