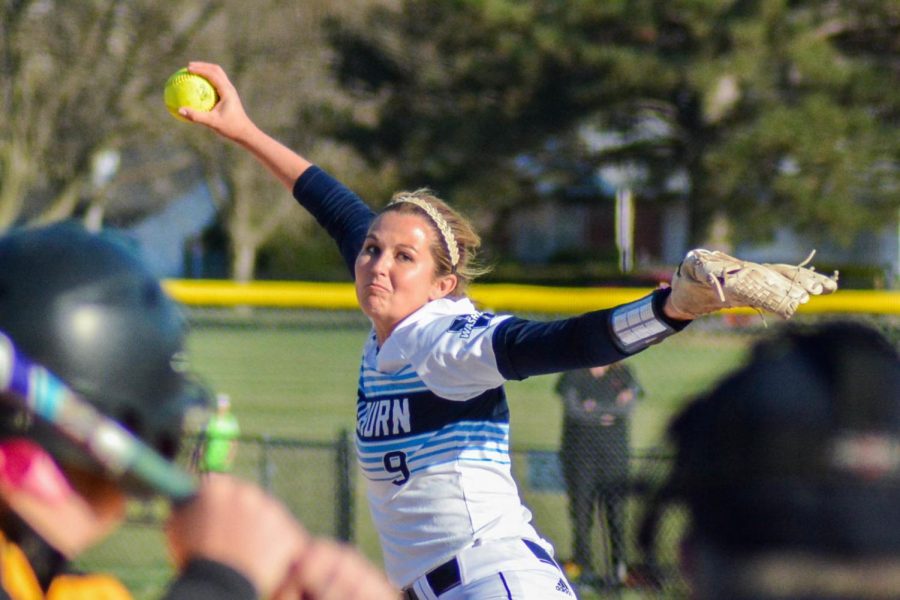 Winding up: Senior pitcher Kelsee Henry winds up her pitch against Missouri Western at the Washburn Softball Complex.

The Ichabods wrapped up their conference season last week as they took on Missouri Western and Northwest Missouri State in two doubleheaders. The first two games with the MWU Griffons began with round one at April 19 at 2 p.m.

This game proved to be very significant for junior pitcher Megan Deiter who took her first loss of the season on the mound. The second inning kicked off the scoring as Missouri Western added two runs on the board.

The Griffons added on to their two run tally with four runs in the fifth inning and one run in the sixth inning from a solo home run.

The Ichabods had their chance to slim the margin, but they fell short of home plate with 12 stranded base runners and a final score of 4-7. The Ichabods then took on the Griffons once again at 4 p.m. for the finale of their doubleheader.

This game began with a solo home run from the Griffons in the first inning. Washburn’s softball team immediately answered back with a two-run first inning as it battled for the outright crown of the conference.

This earned the outright title of MIAA conference champs as they beat Missouri Western in their second game on the day 5-4. The Ichabods then looked to face Northwest Missouri State April 20 at 1:30 p.m.

The Ichabods performed in this game with nothing to worry about. With the outright title clinched, WU Softball came out and played its best game. The Ichabods scored three runs in the first inning as they took a commanding lead.

Washburn then looked to finish the season out strong with the double header and conference season finale at 3:30 p.m. In this match, the Ichabods bats cooled as they relied on a strong pitching performance.

Dieter pitched this game as she looked to comeback from her first credited loss of the season. Washburn put up runs in the third inning and sixth inning with one and two runs, respectively. The Bearcats once again struggled to answer the offense from Washburn as they only put up one run in the fourth inning and one run in the fifth inning.

While Deiter did not shut out the Bearcats, she definitely contributed to their slow offense as she added three strikeouts and allowed only one Bearcat to reach home plate.

Washburn won this one as they took down Northwest Missouri State with a final score of 3-2. Washburn ended the conference season with a 23-3 record and the regular season with a 39-10 record.

Up next for the Ichabods is the MIAA Championship Tournament in Oklahoma City, Oklahoma at the ASA Hall of Fame Stadium. The Ichabods will face Emporia State in the first round on Thursday, April 26 at 5 p.m.