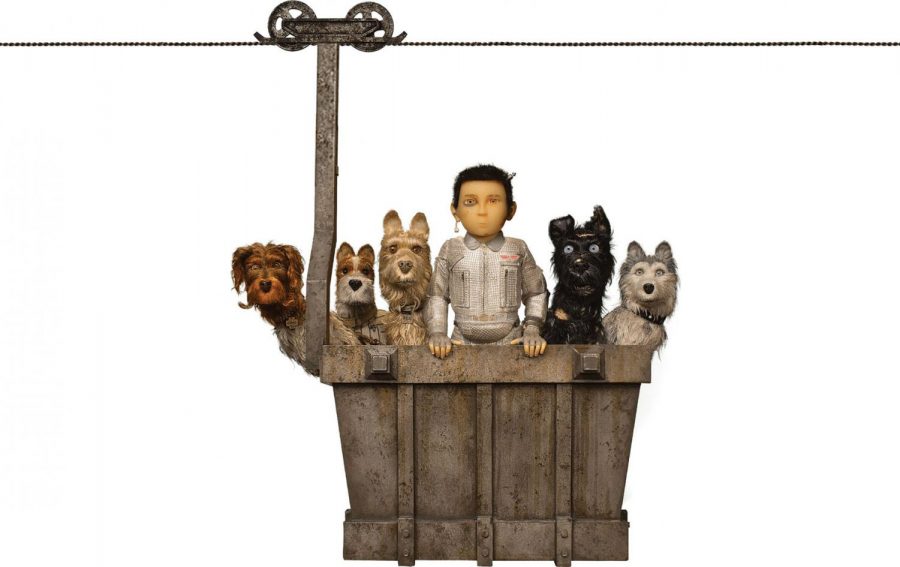 Wes Anderson has always been a favorite director of the hipster, the quirky and the obsessed. His newest film “Isle of Dogs” sees his first return to stop-motion animation since his 2009 adaptation of Roald Dahl’s “Fantastic Mr. Fox.” Does Anderson’s newest foray show that this dog can still learn new tricks, or is it playing dead?

After a severe outbreak of canine flu, Mayor Kobayashi (Kunichi Nomura) of Megasaki, Japan, banishes dogs to Trash Island to prevent the disease from spreading throughout the human population. Later, a young boy named Atari (Koyu Rankin), who is the ward and nephew of Kobayashi, hijacks a plane and travels to Trash Island to find his dog, who was the first banished to the island. Helping him on his quest are Rex (Edward Norton), King (Bob Balaban), Boss (Bill Murray), Duke (Jeff Goldblum) and Chief (Bryan Cranston): a pack of dogs who hunt, fight and forage together. After learning that Atari’s dog is on the opposite side of the island, the group takes a long trek while running into obstacles at every turn. Meanwhile, back on the mainland, foreign exchange student Tracy Walker (Greta Gerwig) is uncovering a conspiracy about the origins of the dog flu and the ultimate plans of Mayor Kobayashi.

“Isle of Dogs” is undeniably beautiful. Wes Anderson often commits himself to a very colorful art style, and his framing, design, costumes and sets are all made to purposefully look fake. He’s a master of formalism. Every character design drips with Anderson’s distinct visual style. The very imagery of every dog is seared into your mind because of how distinct and interesting he makes each look. The wiry feel of matted fur is almost palpable, it looks so real despite the fact it’s surrounded by increasingly fantastical sets. Not to mention Anderson’s command of stop-motion is off the charts here. Every character moves with a fluid, realistic beauty. Water swirls with the constant urgency of a tempest. Smoke rises like cotton from an exploding pillow. “Isle of Dogs” exudes a visual beauty that many animated films wish they could achieve, but presents it in a stylistic way that sears its delightfully weird imagery into your head.

The rest of “Isle of Dogs” is standard Anderson flair. The adventure of uncovering the shady underbelly of Mayor Kobayashi and Atari and the pack searching for his lost dog is nothing really tension-filled, but it is quirky, charming and flashy. The most interesting character development is Chief learning to let down his guard and to appreciate and love his pack and the young boy who want to care for him. Chief also meets Nutmeg, played by Scarlett Johansson, who is barely utilized in the film but has an incredibly strong personality because she is trying to reject and grow past her predetermined life as a show dog. She sees herself as more than just a dog meant to perform for human enjoyment, and, in a way, Johansson playing a character who wants to be seen as more than just her appearance is a pretty intriguing and bright bit of film.

The main theme Anderson seems to be going for in “Isle of Dogs” is a message of the inherent companionship and love between people and pets. Yet Anderson loses this by making it nearly impossible to make a meaningful connection to the Japanese characters in the film. Having all the Japanese characters speak in their native tongue is an interesting thematic choice and seems to be a good example of Anderson showing appreciation to the people and culture of Japan (rather than appropriating this culture as many seem to be insinuating), but making this choice inadvertently means that American audiences will have significant trouble connecting with the human characters in the film. It’s unfortunate that Anderson couldn’t have the characters speak Japanese while using subtitles. It also would have limited the need for a random interpreter character, played Frances McDormand, who is only in the film to provide context in a language the audience can understand.

The rest of the film lacks a particular focus. Even though “Isle of Dogs” is a truly fun romp with cheery and likeable characters, it never fully lands on a theme or general topic. Anderson’s past works were grounded in an interesting thematic depth, but “Isle of Dogs” doesn’t really have much more to say other than the power of love between human and animal, and rejection of authoritarianism. “Isle of Dogs” is not Anderson’s weakest film, though. It’s the delightfully charming, pastiche-colored excitement we’ve come to expect from him, but I just wish it said more.

If you’re in need for a great adventure with delightful characters and beautiful animation, then “Isle of Dogs” has everything you’re looking for and more. If only it had the sharp outlook that other Anderson movies are so well known to have.