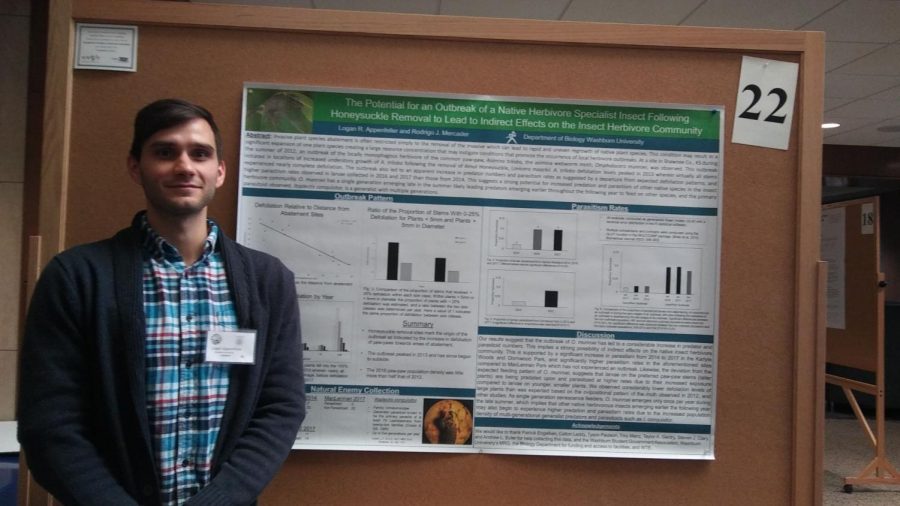 Causation and Invasion: Logan Appenfeller, senior biology major, talks people through his research. His environmental research on the effects of the removal of certain plants hit close to home, since the areas he sampled were all in the Topeka area.

They blinded us with science.

For it’s 150th anniversary, the Kansas Academy of Science (KAS) returned to Washburn University, where it was first held in the days when the school was known as Lincoln College. Paired with the 94th annual meeting of the Kansas Entomological Society as a two day affair, the event kicked off Friday, April 6th with dinner and a keynote speaker, followed by a full day of presentations, lunch, and award ceremonies Saturday.

The event is enormously valuable to students, as it allows science students to present research they have been conducting with students, field questions from fellow science majors and professors, and network with experts in various scientific fields. Science majors from different universities get to meet up every year, catch up with each other’s work, and socialize with people all connected by a similar thread, leading to an excitable and supportive environment.

The event began with a dinner and a talk from keynote speaker Dr. R Scott Hawley, who engaged the listeners with a discussion on the importance of meiosis, before attendees went home to prepare for the next day.

Morgan Hall housed the slew of presentations, both spoken and those presented on poster. Variety being the slice of life seemed the theme of the event, as the range of topics varied from forensic science applications to proton structures.

“A lot of the stuff we do in my research lab is looking at how proteins are associated with obesity. So what we’re going to be doing later on is looking at it compared to the food intake of channel catfish,” said Koster. “A lot of the research [we found] showed that [the protein] was linked with inflammatory diseases…Because we picked channel catfish and they are very similar to humans, we can hope to work together and see if [inhibiting the protein] does work in obesity here, then it would actually work in obesity in humans.”

Kostner is a KAMS student, meaning that she lives on campus, and that in terms of credits, she is a college student, but is of high school age. However, you don’t have to be in a specialized program to present at KAS–most of the presenters are regular science majors in the Kansas area who do research with the help and guidance of a faculty member, and the findings presented can be from long-running projects.

Senior biology major Logan Appenfeller, a Washburn student under the tuition of professor Rodrigo Mercader, focused on the ramifications of removing honeysuckle from different locations in the Topeka area.

“One of the things that we wanted to look into was the effects that the outbreak possibly had on predator and parasitoid numbers in the community,” said Appenfeller.  “The parasitism rate went way way up.”

After sessions of discussion moderated by Washburn students where individuals were able to discuss their findings, an awards ceremony concluded the combined event.