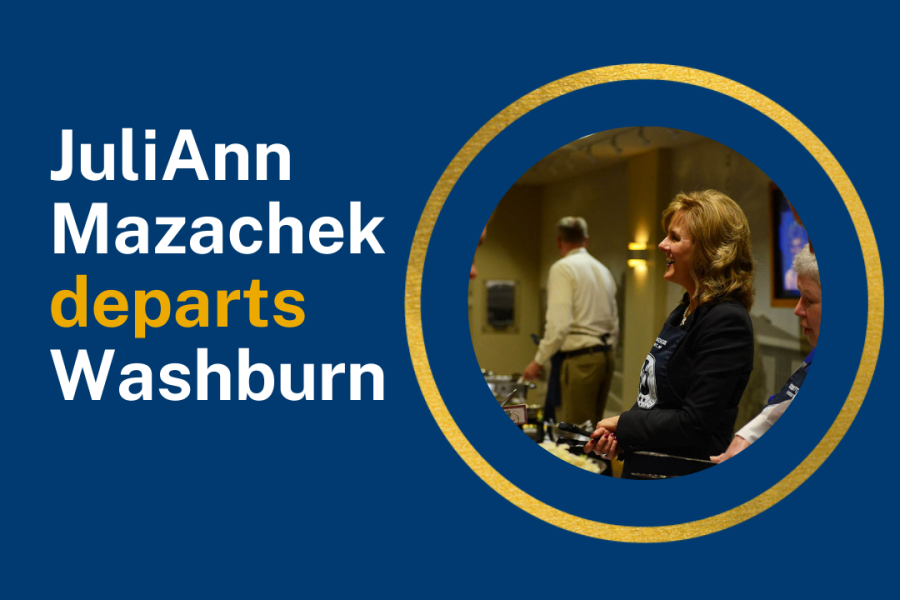 JuliAnn Mazachek, vice president of academic affairs, announces her resignation from Washburn. Mazachek leaves for Midwestern State University at the end of the spring semester.

JuliAnn Mazachek, vice president of academic affairs, has announced that she will be leaving Washburn University to pursue a president position at Midwestern State University in Wichita Falls, Texas.

The vice president of academic affairs was named sole finalist in early March and then appointed as president of Midwestern State University on March 28.

“I am super excited about the opportunity to go down and join a great group of people to make a difference for students,” Mazachek said.

Mazachek plans to finish her role as the vice president of academic affairs by the end of the spring semester. She will then make the move to Texas in early summer to begin her new position.

Coming to Washburn in 1992, Mazachek has had many significant roles at the university. She started as an assistant professor of accounting and then was hired as the dean for the School of Business and transitioned to being president and CEO of the Washburn University Foundation and Alumni Association.

She accepted a position as interim vice president for academic affairs in 2016 and after a year was given the job permanently.

Through her many roles at Washburn University, Mazachek felt that she was ready to take on something she had never done before.

“I just felt a calling that the time was right, and the position was right for me,” Mazachek said. “I feel like I can make a big difference there.”

Her calling had to do with helping first-generation students, which is what she came to love about Washburn.

“In so many ways it [Midwestern State University] is similar to Washburn, over 50% of the students are first-generation, which is really my passion,” Mazachek said.

As a first-generation student, Mazachek is always looking and willing to lend a helping hand to students who are the first in their families to receive a degree.

During her time at Washburn, many students have come back to tell Mazachek that she inspired them.

She recalled an occurrence with a student who had graduated in the late ‘90s, but she often saw them in the community. The student told her about a time when they spoke in the elevator about pursuing a career as an accountant and how Mazachek pushed them towards his decision.

“He said ‘You said you thought I should be an accountant because I had all those kinds of tendencies and I made a choice to do it’ and now he is the CEO of an accounting firm,” Mazachek said. “He said ‘I would have never done that if you wouldn’t have said that’ and those kinds of stories bring me great joy.”

Mazachek has not only impacted students but her colleagues as well.

“I really admired Dr. Mazachek from the beginning when she took the job,” said Jennifer Ball, associate vice president of academic affairs at Washburn University.

Ball has worked alongside Mazachek since 2019 and through some of the most challenging years due to the pandemic.

“It’s the way she interacts with people, she’s just such a great leader and has a tireless ability to listen,” Ball said.

Mazachek leaves a large legacy at Washburn, but she is excited for her future at Midwestern State University.