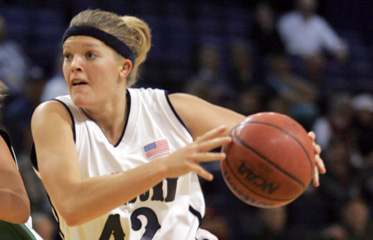 After a month-long coaching search, Washburn women’s basketball welcomes back an old face with Lora Westling being tabbed as the sixth head coach in program history Wednesday morning.

Westling played four seasons for the Ichabods from 2001-2005, including as a starter on the 2005 national championship team under previous head coach Ron McHenry. She also played one season on the soccer team and would later serve as a graduate assistant for both programs.

“I am humbled and honored to have the opportunity to lead Washburn women’s basketball into the future,” Westling said in the announcement on the Washburn Athletics website. “This program was so instrumental in shaping me as a young woman and I do not take that responsibility lightly.”

After graduating with her MBA from Washburn in 2007 the Casper, Wyoming, native began her coaching career with assistant coaching stops at the University of Missouri-St. Louis and Truman State.

Her first head coaching position came at Illinois College in 2013-14 where she spent three seasons before taking the head job at Western Colorado University, where she would coach for six seasons before coming back to Topeka.

“We are very excited to welcome Lora back to Washburn as the sixth head coach for the women’s basketball program,” said Athletic Director Loren Ferré in the announcement on the Washburn Athletics website. “She was an accomplished student-athlete at Washburn and returns after experiencing success with each of the prior teams she coached. We are excited for the future.”

A press conference to officially announce the hiring will be held in Washburn’s McPherson Booster Room Friday, April 15 at 10 a.m.