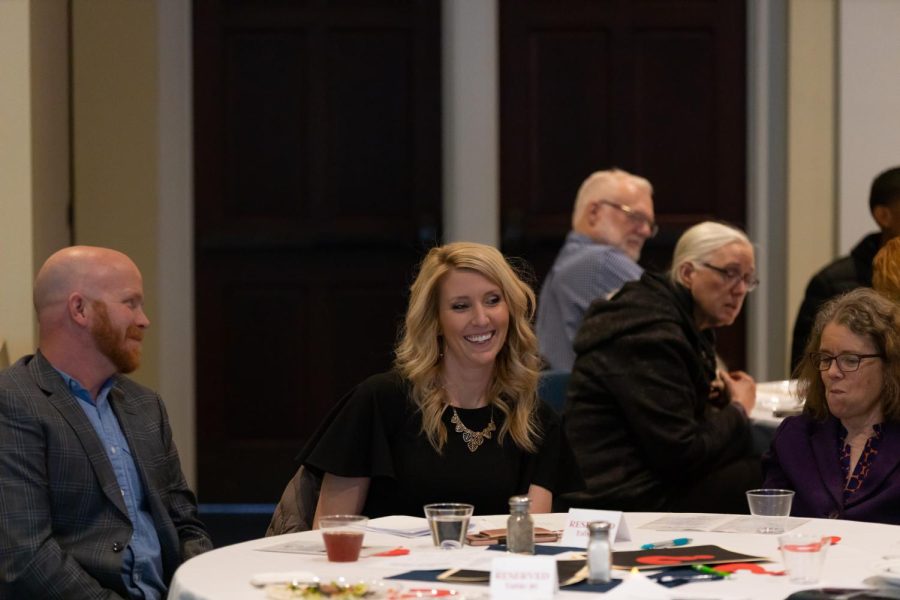 On April 7, the Department of Mass Media hosted its first in-person Keynote Speaker Event in two years at the Bradbury Thompson Alumni Center.

The Keynote Speaker Event gathers students and alumni to recognize the achievements of outstanding mass media students. Alumni are encouraged to attend to help create networking opportunities for the next generation. The Thursday night event began with Keynote Speaker Molly Howey taking to the podium and delivering an inspiring speech about her experience at Washburn while simultaneously giving life advice to current students.

“As cliché as it sounds, it’s important to do what you love and love what you do. Go for your dreams and don’t be afraid of trial and error,” Howey said. “Failing is part of the process, but it allows you to be better so that you go on to do what you love.”

Howey is a 2008 mass media graduate, current President of GO Topeka and Senior Vice President of Greater Topeka Partnership. She was given the 2022 Ad Astra Alumni Award for her outstanding work to the community after her Keynote speech.

In extending a hand of good faith to the hard-working students of mass media, the department celebrated outstanding students with awards and scholarships.

Outstanding students received awards correlating with each concentration of mass media, overall service to the department or to Washburn Student Media. Besides awards, a handful of scholarships were granted to students from all concentrations. Logan Schmidt, senior marketing and public relations major, received the Dick Snider Scholarship.

“Receiving a scholarship was definitely a big honor. It was great to be hanging around with a bunch of fellow mass media majors,” Schmidt said. “I thought it was a great event and I think more people should come out next year. We’ll make it an even bigger event.”

This year’s Keynote Speaker Event centered around a theme the mass media department inspired by the iconic board game, Clue. In an interactive whodunit-styled murder mystery to uncover the death of mass media student Victor Ramirez, several department professors cosplayed as characters in a pre-recorded video aiming to cast suspicion on each other while preventing the discovery of the real killer.

One such culprit, Kristen Grimmer, assistant professor of mass media, cosplayed as Dr. Orchid and enjoyed the acting opportunity.

“I’m very excited to show people’s reactions to the murder-mystery videos, because this is the first time we’ve done something like this where it’s more interactive,” Grimmer said. “Normally we do a theme and that’s really fun, but this’ll be the first time where we’re asking the audience to participate.”

Maria Stover, professor and chair of the mass media department, shocked attendees when she was revealed as the culprit responsible for the death of Ramirez on the basis of not wanting to give overrides.

With a newfound sense of safety, the audience dispersed after the case had been solved and the event concluded.