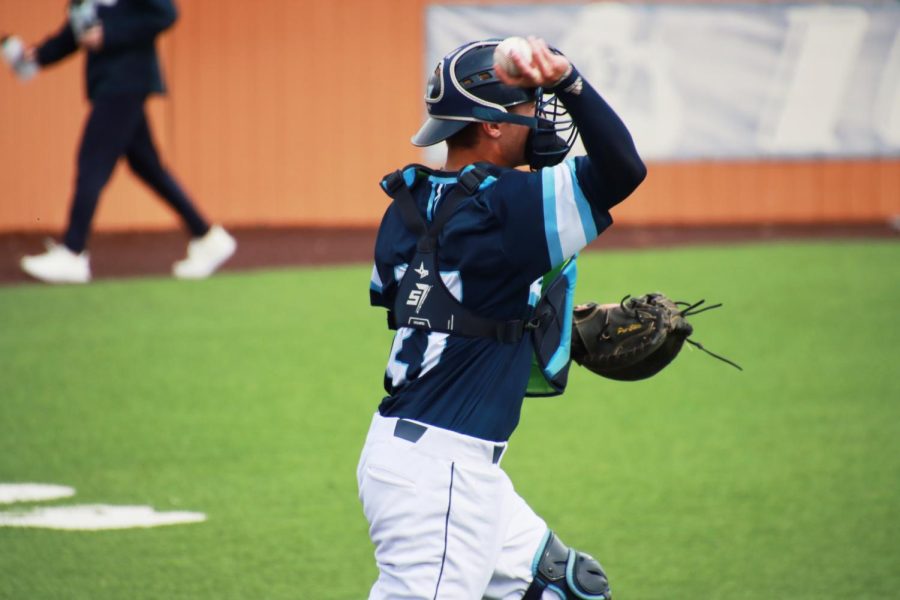 With the series knotted at one game a piece, Washburn baseball faced off with Central Missouri in the series’ rubber match April 3.

Each team managed only five hits in the game but the Mules’ were bigger, with a three-run home run in the ninth inning to win 5-3.

“We went toe-to-to with the No. 4 team in the country and you know, if we don’t hit a guy and walk a guy and find a way to scratch a double baserunner, I think it’s a different story,” said head coach Harley Douglas.

The loss means that the Ichabods also fall in the series two games to one, and move to 22-11 overall on the year and 13-7 in MIAA play.

Sophomore Jack Brimacombe got the nod on the mound and struggled with command to start, walking the leadoff hitter and moving them to third with a balk and wild pitch. The run scored on the only hit of the inning, putting the Mules up 1-0.

The middle of the Ichabods order got them started in the second inning, beginning with a leadoff bunt single by senior third baseman Zion Bowlin. That was followed by a double from sophomore center fielder Connor Scott and single from junior shortstop Cal Watkins to score Bowlin.

Scott was able to score on a wild pitch two batters later giving Washburn a 2-1 lead after two.

Brimacombe settled in using his defense to keep the Central Missouri bats quiet, allowing only one hit from the second through fifth innings.

The sixth inning began with a single for the Mules, who moved the runner to second before tying the game on another single. Brimacombe exited after the second hit, finishing with five and one-third innings pitched, two strikeouts and four hits allowed.

“Jack did a good job, he does a really good job of keeping hitters off balance and he attacks the zone and doesn’t let a lot of things work against him,” Douglas said.

Senior Joel Casillas took over pitching responsibilities, getting two ground balls to close out the inning, keeping the score tied.

The bottom of the inning began with a single from senior first baseman Brett Ingram, who moved to second on a walk by Bowlin. Watkins hit a ground ball to the shortstop who overthrew the first baseman, allowing Ingram to score, putting the Ichabods in front 3-2 after six.

Casillas finished his day with a scoreless top of the seventh inning, retiring all five he faced in the game.

Senior Dalton Huggins took over in the eighth inning retiring two batters on five pitches before exiting for senior Rane Pfeifer who struck out the final batter of the inning.

After a scoreless bottom of the inning Pfeifer stayed on for the top of the ninth, retiring the first two batters. The next two batters were hit by a pitch and walked to bring up a pinch hitter for the Mules, senior Donovan Ditto. Ditto deposited a 1-1 pitch over the left field wall for a three-run home run.

“That’s been Rane’s problem all year is walking guys and hitting guys and it came back to bite us, and that will sting a little bit,” Douglas said.

Pfeifer finished the inning but Central Missouri led 5-3 with Washburn down to its final at-bat. With that opportunity they managed one baserunner but could not get any runs across as the game finished 5-3 in favor of the Mules.

Brimacombe earned a no-decision after giving up two runs in five and one-half innings, Pfeifer took the loss, falling to 2-3 on the season. Ingram led the Ichabods with two hits while Watkins drove in the lone RBI.

The team has a busy week as they will look to avoid falling outside the top four of the conference standings.

“I don’t think it’s going to compile with us going toe-to-toe there. I mean, we played bad baseball at the start of the week … and we got back to playing our brand of baseball,” Douglas said. “We’ve got to lock it up. If we can lock it up we’re as good as anybody.”

The loss moves Washburn to 22-11 on the year as they get set for a single game non-conference road matchup with William Jewell College April 5.