The Washburn Review • May 18, 2018 • https://washburnreview.org/3864/features/god-of-war-delivers-huge-spectacle-engaging-story/ 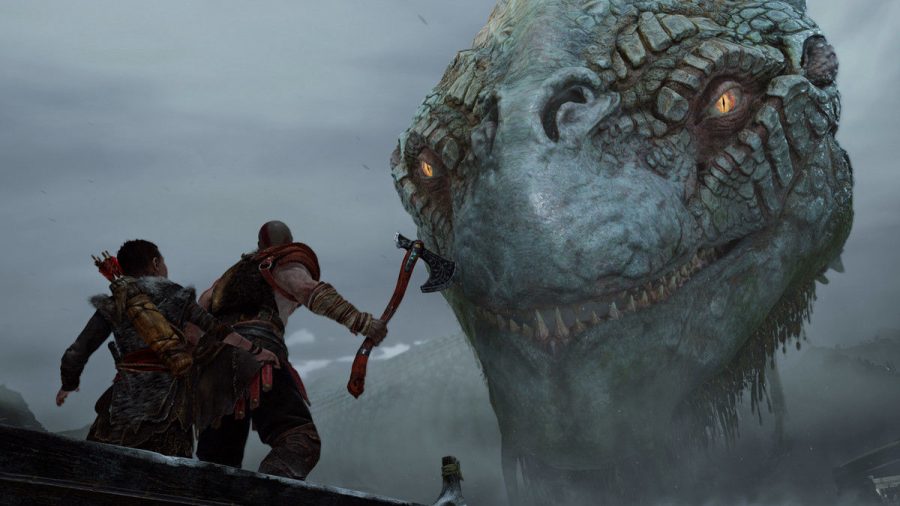 The game so good you’ll be shouting “boy” at all your friends.

The “God of War” games have always been preoccupied with telling eccentric, larger-than-life stories about wars between all-powerful gods. The series has been light on story, and its main protagonist was nothing more than a ‘roided-out vengeance machine. In the new reboot, simply titled “God of War,” the developers decided to use the the mythology of the game to tell a deep and emotionally engaging story without sacrificing excellent hack-and-slash gameplay and huge, spectacular boss fights.

The newest game in the series picks up our protagonist Kratos (Christopher Judge) out of Sparta and Greece in general to relocate him to the frigid, forest-covered lands of Scandinavia. Many years have passed, and Kratos has created a new life for himself after killing every single god in the Greek pantheon. Now his new wife has sadly died, and in order to fulfill her dying wish, he must carry her ashes to the highest peak in all the realms; his new son Atreus (Sunny Suljic) must go with him. Right when they are about to leave, a stranger covered in tattoos (Jeremy Davies) shows up at their door begging Kratos to make him feel something. What follows is a travel of epic proportions between father and son with plenty of encounters with godfolk, a giant serpent that encircles the world and a couple of helpful dwarf brothers (Roger Craighead and Adam J. Harrington). Atreus and Kratos must reach the highest peak quickly, before the gods and monsters sent by Odin bring an end to their journey.

The biggest shining light of “God of War” is its story. The game’s story and the cinematic beauty tied into it is one of the most impressive you can buy, and the quality of the story is mainly due to the nuanced and interesting characters appearing in the game. Kratos is his usual prickly self, but he’s much more quiet and introspective than in past games. He doesn’t pick fights and scream at the top of his lungs as he does in previous games. Kratos embodies a fantastic fish-out-of-water experience due to his relocation of over 2,000 miles. He’s learning information about the lands he’s in and the new pantheon of gods surrounding him. The game also takes a moment to show us sides of Kratos we really haven’t seen before. His anger and inner turmoil come from his distaste for the gods, a designation that he himself is burdened with. The game almost casts an distasteful eye towards both past and present Kratos. He is a man born out of violence, and while the past games focused on spectacle, they often ignored how Kratos was driven by constant bloodlust and how some of his actions were really abhorrent. “God of War” does great work with Kratos by never making him a fully transformed and redeemed character, but putting him on the path to redemption. His relationship with his son particularly is the most interesting part of the game.

It’s sad to think that so many people are saying they actually enjoy “God of War” because Kratos and Atreus’ relationship reminds them of their relationship to their father. The relationship between the father and son at the center of the game is filled with emotion and strong, dramatic storytelling, but sadly it is a poor relationship between a struggling son and an emotionally withdrawn father. The point of the game is to nurture this bond. The game begins with Kratos teaching his son to hunt, but the game isn’t about what Kratos teaches Atreus, but about the lessons Kratos learns from his son. Through his son, Kratos begins to realize that his heroic deeds are more important than his sins and the importance of loyalty and his role as a father. While their relationship isn’t perfect, the way it grows and changes is the real backbone of the story.

These two characters are among a number of other fantastic personalities. The Witch of the Woods (Danielle Bisutti) and The Stranger are both fantastically realized characters with deep backstories and motivations. Telling you much more about them would spoil the great reveals of their actual identities, but let’s just say that the pair’s story and the theme it represents is somewhat the inverse of our two main protagonists.

It’s these deep, interesting themes that separates “God of War” from standard videogame fare. “God of War” is a fantastic spectacle that pits two gods in epic battles unlike anything I’ve even seen in movies before. Yet the game slows things down to discuss such topics as the nature of redemption, the cyclical destructive power of vengeance, the burdens parents place on their children and the role of fathers.

This story develops concurrently with incredible hack-and-slash gameplay. Kratos’ main weapon is called the Leviathan Axe. Watching Kratos swing around the formidable weapon as he decimates the draugr who seek to hurt his son is somewhat beautiful, in a sense. The axe also has a throwing mechanic that can be used to stun, pin and freeze enemies during combat. After being thrown, it can be returned to Kratos’ hand after pressing triangle, a result that is incredibly satisfying. The axe, in this sense, operates very similarly to mjolnir in the “Thor” and “Avengers” films. The satisfaction of watching the axe swing back into your hand with a determined flourish is at least as satisfying peeling dried glue off your hand in kindergarten.

The combat starts out, sadly, as very simple. R1 for a light swing, R2 for a heavy one, L1 for a quick block (which, if done right before an enemy hits, causes a parry and briefly stuns the opponent and opens up an opportunity to attack), and L2 brings up your aiming for axe throws. These can be turned into pretty varied combos. It all looks very pretty, but the game’s actual fighting doesn’t get robust and interesting until you start leveling up the abilities of the axe to do more interesting things. This really opens up how you’re able to use the axe. Dodging in certain ways allows you to use the axe differently, and perfecting certain combos after upgrading results in powerful and destructive combos. Overall, the actual combat becomes immensely satisfying once you’re able to turn the game into something that attunes to your interests. If playing from a distance is your jam, you can focus early XP (which is a currency for upgrades of all sorts rather than simply a general points system) in skills that do special things: if you chain axe throw combos or are able to do trick shots with the axe like pins, charged freeze shots or even headshots that combo into explosive axe throws. While the combo starts out slow and uninteresting, it quickly morphs into the caustic, destructive carnage that the game was built for. Atreus is also helpful in combat as he gathers new specialized arrows which you can use to stun enemies, create electric explosions that chain, or even summon helpful elemental creatures with different abilities. Atreus himself feels useful to you, and fights become a lot easier once you realize how much strength and disruptive power he has.

On top of the combat lies a pretty complex set of RPG systems, most notably a stat gauge. The six different stats (Strength, Runic, Defense, Vitality, Luck and Cooldown) modify Kratos and Atreus in a variety of ways allowing for slight alterations to the style the player prefers. Nothing is going to drastically change the way you play, though. In a way, the specific stat changes do feel like a bit of an add-on. Equipping armor and talismans that improve your Runic ability doesn’t drastically change the way you play compared to armor that increases your strength. That being said, the ability to upgrade Kratos not only through acquiring new skills via the various skill trees, but also by acquiring new armor with different status buffs and upgrading it at shops to improve its stat potential is a very unique mechanic to level up your character. It means you’ll be juggling several different types of armor, runes, talismans and enchantments and deciding which ones you enjoy best and want to upgrade. All of this upgrading and crafting is done not only with currency, but also by collecting specific items directly tied to the armor. Want to craft poison resistant armor that raises your runic status? Well you’d better collect a ton of mist echoes, a currency directly located in a special area of the game.

All of this makes for a pretty satisfying gameplay experience. The enemies are varied just enough for nothing to feel to stale, and the individual battles you go through as you progress through the story change dramatically; only some re-skinned boss fights make you groan. The level design leaves a little something to be desired, relying on common wall-scaling patterns that may seem canned. The story-telling and writing, though, is interesting enough to distract you from the slog of these levels. You can only play so many “Uncharted” type climbing sections before you begin to grow tired. There is a huge open-world section in Midgard that functions as a sort of hub area, distracting from the otherwise linear climb design.

Even with the sparse nitpick, “God of War” is still fantastic. It’s a grade-A experiment in next-level storytelling. “God of War” balances an emotional and thematically-rich story with huge spectacle-filled battles. The characters are rich and nuanced. The combat, while slow at first, quickly develops into a ballet of carnage. Even the arena mode is fun and unique compared to similar modes in other titles. “God of War” is a labor of love. Even when it lacks in certain areas it excels in others at the same time. The cycle may end here. Hopefully this series doesn’t.