Softball stays perfect at home with sweep of Griffons 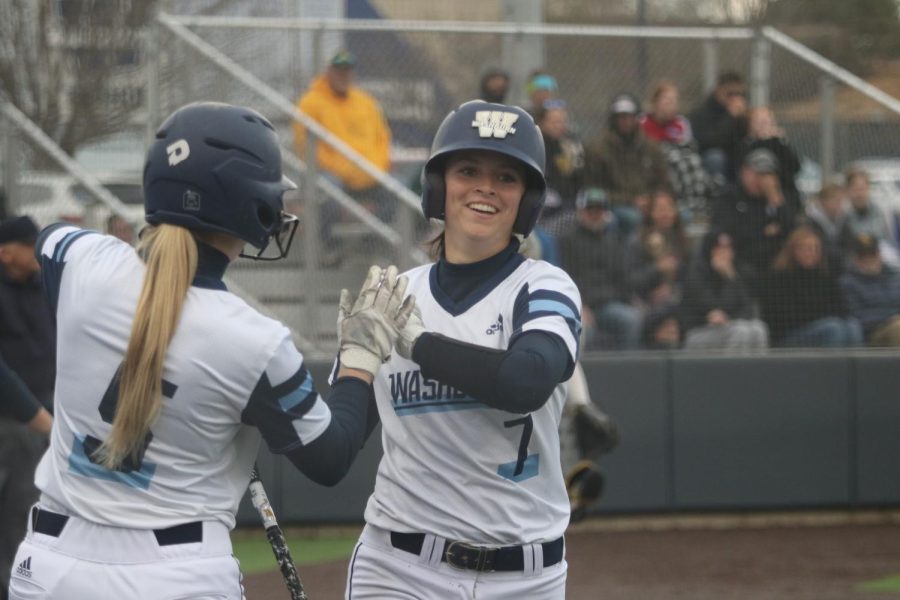 Junior Jenna Moore smiles after scoring a run April 1, 2022. Moore had one hit in game two of the day.

After being on the road for nearly a month, Washburn softball returned to Gahnstrom Field for a Friday doubleheader against Missouri Western State.

They picked up where they left off, scoring two more wins to stay undefeated at home on the year with a 16-0 record.

“Any time you can sweep in this conference, it is big and Missouri Western traditionally year-in and year-out finishes in the top three or four slots in the conference so those are big wins for us for sure,” said head coach Brenda Holaday.

Sophomore Jaycee Ginter began the day in the circle for the Ichabods and started with a clean first three innings, allowing only one hit and striking out six.

“I felt pretty good starting the first game, I felt completely warm with all of my pitches and I trusted them,” Ginter said.

One baserunner reached third base in the third inning, but was thrown out at home by sophomore third baseman Marrit Mead on a sacrifice bunt, keeping the score tied at zero through the top of the third.

After picking up one hit in the first two innings, Washburn’s offense came alive with two outs in the third. Sophomore left fielder Paige Robbins lined a single into center field, scoring junior Jenna Moore from second base who had walked.

Ginter followed with a double into left-center field to score Robbins and give herself some run support. Senior designated player Ashton Friend finished off the rally with a line drive into left field, scoring Ginter and giving the Ichabods a 3-0 lead.

Robbins and Friend came up big again in the fifth inning, with Robbins getting a one out single and moving to second. Friend picked up her second two-out single, this time past the shortstop to score Robbins and make it a 4-0 game.

Ginter allowed one run in the sixth inning on a walk and a double but limited a big run from Missouri Western State.

In the bottom of the inning, Washburn loaded the bases with two outs and Ginter cleared them with a double into left-center, giving her four RBIs in the game. Friend followed with a single into left field, scoring Ginter and putting the Ichabods up 8-1.

Ginter continued her run in the circle for the top of the seventh inning, striking out the side to give her a complete game win. The three strikeouts also gave her the most in program history in a single season, with 183 and counting.

“I knew in a previous article that it was coming but I didn’t know it would be today, obviously,” Ginter said.

Junior Ashlie Thissen got the ball in game two of the day and gave up one run in her first inning of work on a walk and a triple into deep right field, putting the Griffons up 1-0 early.

Washburn’s offense wasted no time responding, with a leadoff single from Mead. She stole second base to put herself in scoring position for Robbins to deposit a single into left field, tying the game.

“Our team is seeing the ball pretty well, we string them (hits) together so we kind of feed off of each other,” Robbins said. “I try to do my job up there and move runners. When Marrit gets on I try to move her over and get some runs.”

After a single from Ginter, Robbins was able to score on a wild pitch, putting the Ichabods in front.

Washburn added another run in the second inning, beginning with a single from Moore. Two batters later Robbins singled and Ginter made it back-to-back, scoring Moore to make it a 5-1 game.

Thissen cruised through the third before running into trouble in the fourth inning, with three of the first four batters reaching base, two via fielder’s choice, scoring one run.

Senior Raegen Hamm took over in the circle as Missouri Western State continued to be productive at the plate. Hamm walked the first batter, scoring another run, and the next sent a single down the right field line, scoring two more runs to tie the game at five.

Hamm retired the final two batters of the inning to keep the score knotted. Just like in the first inning, the Ichabods responded quickly and Robbins and Ginter were involved again. Robbins sent a single up the middle and was brought home on a triple into the right field corner by Ginter.

“Thankfully we had them back-to-back in the lineup because our other hits were kind of suprratic but those two were really good all day long,” Holaday said.

Hamm worked a scoreless fifth inning that was capped off with a double-play. She recorded the first two outs of the sixth inning, allowing one hit, before Ginter came in and recorded the final out of the frame.

Washburn picked up two hits in the sixth but could not extend the lead. It was not a problem for Ginter who finished her big day with a perfect seventh inning, striking out two to and picking up her first save as the Ichabods completed the sweep.

“She doesn’t ever get too high or too low and that is part of why she is really good in high-stress situations because she doesn’t feel that stress, she wants that opportunity and she doesn’t come through all of the time but I would put my money on her,” Holaday said.

Ginter threw a combined eight and a third innings, allowing only one run and striking out 15. At the plate she had six hits and six RBIs on the day. Just in front of her, Robbins had seven combined hits, knocking in two runs.

“There is just something about our field I think because we have had success here, our kids were excited to be back home and have our crowd here,” Holaday said.

The wins moved Washburn to 16-0 at home with another doubleheader on deck the next day, this time with Northwest Missouri State.