The Washburn Review • May 21, 2018 • https://washburnreview.org/3845/features/deadpool-2-delivers-on-hilarity-action/ 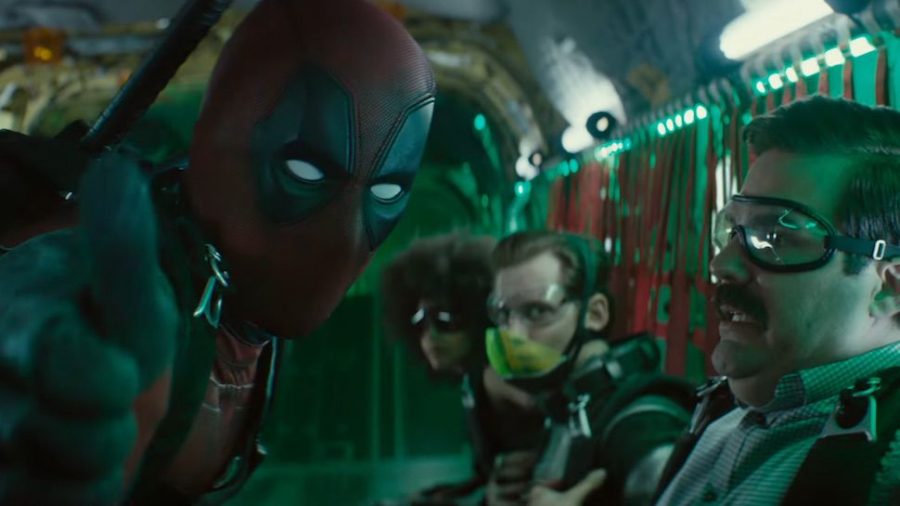 The Disney/Fox merger only makes the “is he Cable or is he Thanos” joke even more confusing.

Back in 2016, “Deadpool” made a Valentine’s Day splash and not only gained massive critical and commercial appeal, but gained over $363 million domestically. It was a shocking turn of events for the cinematic universe the film called home, but also signaled the appeal of and interest in R-rated superhero and action films. It’s now only a few years later, and the “Merc with a Mouth” is back. Does his new movie match up to its predecessor, or does it bite off more than it can chew?

After he runs out of time on a mission, mercenary Wade Wilson (Ryan Reynolds), a.k.a. Deadpool, blames himself when he loses something incredibly close to him as a result of the botched mission. Hitting rock bottom and seeing no other redemptory path, Wilson joins the X-Men and abandons protocol during his first trainee mission, an intervention at a mutant reformatory school where an unstable student is having a standoff. He and the student, Russell (Julian Dennison), find themselves locked up at Icebox, an inescapable prison for mutants. In the distant future, Cable (Josh Brolin) experiences a horrific loss to a mutant terrorist and uses a device to go back in time and kill the man who wronged him. The question is, which of the two new inmates is he after?

The story of “Deadpool 2” is much more plot-heavy than its predecessor. Whereas the first film in the series was more about a general revenge story and featured a small cast of characters, this one ups the ante and features different moving parts and the time travel concept, and even switches up the dynamics of the characters that are familiar to Deadpool fans. The story works, for the most part, and its progression is ultimately interesting.

Vanessa, Wade’s fiancee who was introduced in the first film and is portrayed by the excellent and charming Morena Baccarin, is barely in the movie. An early decision in the script explains her lack of appearance, but only serves to give Wade an emotionally painful journey through the film. It’s an incredibly upsetting decision as it removes the agency and presence of a female character in favor of furthering a male character’s emotional development.

What follows is a plot involving Wade attempting to reinvent himself. He tries to discover his interpretation of heroism, and we do take a moment to examine that Wade’s moral compass is somewhat agreeable. The introduction of Cable delivers a hero who only works in absolutes. Someone killed those dear to him, and the only choice he has is to go back in time and kill that person. Deadpool, in contrast, seems sympathetic to Cable’s views, but believes there’s redemption for the character. This is where I think “Deadpool 2” is lost in what exactly it’s trying to say.

In general, it would have been preferable that “Deadpool 2” had nothing to say at all. The first film was a bare-knuckled brawl with some great comedy and likable characters that didn’t sacrifice actual emotion for jokes.

“Deadpool 2,” on the other hand, wants to talk about the nature of redemption and how fate is not determined. The movie takes an amiable stance on the topic, but often doesn’t seem to fully know how it feels.

Cable exists to bring an element the movie wishes to criticize, but it feels like the film feels endorses his vengeful point of view. If the movie had avoided commenting on these topics altogether, it would’ve worked splendidly, but taking the time to comment on these things somewhat cheapens the attempt when it doesn’t quite land.

In every category, the movie works very well. The action is exciting and more fluid than the last, mainly due to the introduction of “John Wick” director and veteran stunt coordinator David Leitch, who makes the action more cohesive and cinematic compared to the previous film. A big car chase featuring the two opposiing sides is almost certainly the most exciting part of the movie due to all of its moving parts and its presentation of one character’s particularly interesting powers.

This character, of course, is Domino (Zazie Beetz), who, along with Reynolds, steals the show. She’s sassy, blunt and talented. There’s a constant gag that her powers are “useless and dumb” according to Wade, yet she constantly proves herself to be the most useful person in the group, even more than the titular character. Stefan Kapicic plays Colossus, who also appeared in the first film and has a much bigger role in this movie. He and Deadpool play off each other so well, both being invested in their roles as heroes but seeing different sides of who a hero is and what they’re allowed to do. In a way, the most interesting character development in the movie is in how Colossus helps Wade see the value of being heroic and, in turn, how Wade helps Colossus see that sometimes you have to be willing to get a little dark if you want to make the world a better place.

Along with Cable, there are some characters who are lacking. TJ Miller makes a frustrating return as Weasel, despite recent trouble with allegations of sexual harassment of his co-stars. His character was only somewhat funny in the first movie, and this appearance shows no improvement to the character and the exact same jokes as in the previous film. Dopinder, played by Karan Soni, trades his delightfully affable foil for Deadpool with the persona of a obsessed mega-fan. He’s part of a running gag in the film in which he is constantly devalued by the man he idolizes. Soni is a talented actor who I liked very much in the previous film, but here he has very little to do.

The jokes work in the movie as well, but often the movie wants to have its cake and eat it too. It makes jokes at the expense of tropes in the superhero genre while also using these tropes successfully to make for appealing action. Toward the end of the movie, two CGI characters have a huge fight and Deadpool makes a meta comment on how common that is in these types of movies. Then, instead of doing a parody of those fights or further commenting on the silliness of it all, the CGI characters simply fight in a way seen in these types of movies before. It’s the kind of referential parody comedy that doesn’t feel strong due to its lack of edge.

Overall, “Deadpool 2” is a good, fun film: one that has plenty of hilarious gags, fun action and likeable characters to make for an enjoyable experience. It does disappoint, however, in how it approaches the message it attempts to convey and some of the ways it uses its characters.