‘Hereditary’ brings horror thrills that will scare the pants off you 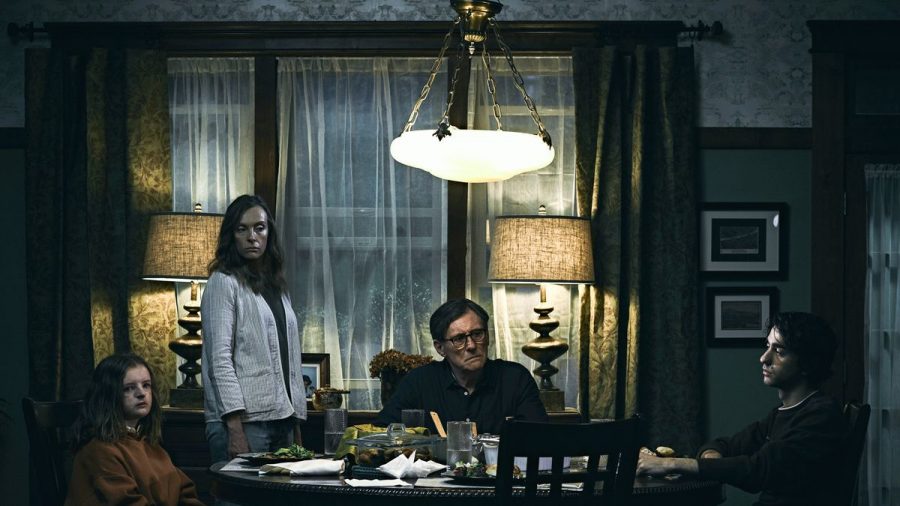 Photo courtesy of A24

No family is safe. This is not the movie you think it is.

On the day of her mother Ellen’s funeral, Annie Graham (Toni Collette) delivers a eulogy that reveals that her mother and her did not have the best relationship due to her mother’s secretive life. Annie receives comfort from her husband Steve (Gabriel Byrne), but her relationship with her children is strained. Her daughter Charlie (Milly Shapiro) was very close to her grandmother and has been traumatized by her death. Peter (Alex Wolff), Annie’s son, is not affected by the death, but his attitude towards his mother is icy due to an unknown prior incident. As Ellen’s death begins to settle in the family we start to see the cracks among the Graham family, and how Annie and Ellen’s past harbors too many dark secrets for any family to ever escape.

“Hereditary” is one of the most disturbing horror movies that has hit big screens in awhile. Not just in terms of the film’s disgusting imagery which is stomach-turning in its grotesque accuracy, but also in the context of what the characters experience throughout the film’s plot. “Hereditary” is about a family ripping itself apart at the seams. It’s about all the little small injustices that we pass along our bloodlines and how parents change and hurt their children over and over and over again. Generation after generation. It’s the kind of nihilism that people actively try to run from. It’s just as terrifying as the sinister past that envelopes Ellen, the Grahams and the people who cross their path. Talking more about specifics would ruin the experience for anyone who hasn’t seen the movie, but suffice to say that “Hereditary” isn’t a good movie with some solid scares. “Hereditary” is a haunting movie in which the fear within its frightening imagery is heightened by the absolutely horrific ideas it has about the nature of family as an institution and how the love parents transfer to children is often overshadowed by the pain they transfer to them.

All this is expertly conveyed through Toni Collette, who gives the performance of her career as Annie Graham. Her expressive work is of a completely higher caliber than you see in most horror movies. The closest performance in a horror film with this level of terrified gravitas that I can conjure up is Essie Davis in “The Babadook.” Collette is able to contort her face into nightmarish expressions I never thought possible and her helplessness and desperation to escape the evil surrounding her just drives the nihilistic approach the film takes right into your soul.

Alex Wolff also gives a terrific performance as Peter, whose fear and confusion makes him the perfect audience surrogate which in turn makes his arc throughout the film much more horrific than it would be if he wasn’t someone you can so easily connect with.

Kudos should also be given to the film’s director, Ari Aster. “Hereditary” is his debut as a director and the film clearly shows he has promise and sets the bar high for his future films. His command over small but noticeable visual cues gives the film a certain mythology that carries its story forward constantly. There’s a certain light element that constantly hints at a sinister presence, and does so without ever being completely direct about what the light is until later. This level of visual detail is something that the best horror movies use competently.

“Hereditary” is a slow, emotionally upsetting and disturbing horror films. One that digs its long, disgusting, blood-soaked claws into you right when you think you have it all figured out. It’s not going to be a movie for people who like these sorts of slow, cerebral horror films. Even I thought it took a little too long to get started, but when it does it grips you and doesn’t let you go. If you’re easily scared, prepare to watch through your fingers.