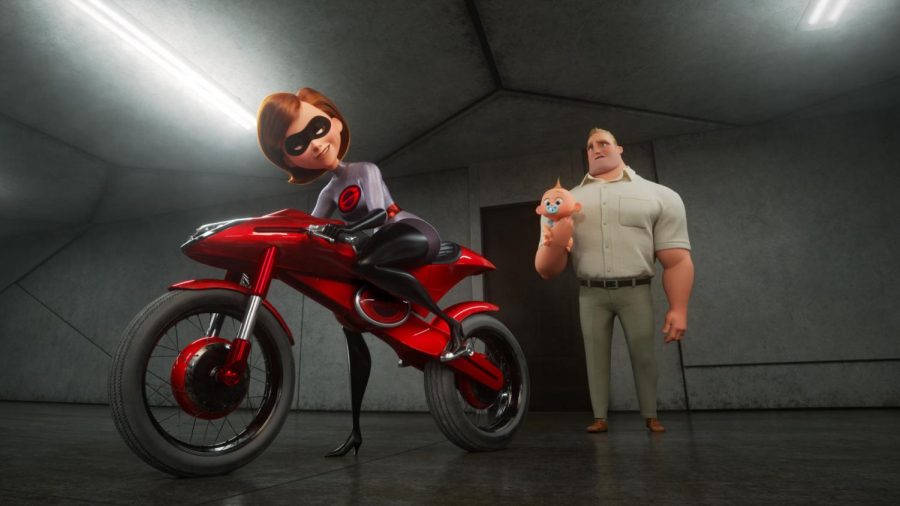 Starting off right where the last film ended, The Incredible family and Frozone (Samuel L. Jackson) are locked into a battle with The Underminer (John Ratzenberger), who is using his vast network of tunnels and explosives to rob thousands from Municiberg banks. After failing to stop the villain, the “Super Relocation Program” is shutdown, thus causing dozens of supers to permanently go into hiding. Shortly after Bob Parr/Mr. Incredible (Craig T. Nelson), Helen Parr/Elastigirl (Holly Hunter), and Lucius Best/Frozone are approached by the two siblings who run the massive telecommunications business DEVTECH, Winston and Evelyn Deavor (Bob Odenkirk and Catherine Keener, respectively), who want to lobby for superheroes’ rights and help people begin to have a better opinion of the roles of superheroes in society. Both of them deem Elastigirl the best super to be the new face of their initiative. Helen goes back to work despite the anxiety she gets from leaving the kids, and Bob is left to take on the duties of raising teenager Violet (Sarah Vowell), troublemaking Dash (Huck Milner) and infantile, power-riddled Jack-Jack (Eli Fucile). As Bob struggles at home, Helen runs into a new super-villain named Screenslaver (Bill Wise) who is using television screens to hypnotize people into doing his will.

The first “Incredibles” film is a Pixar classic. Directed by Brad Bird, the movie is known for its jazzy score, fun action, spy elements and great characters. Yet, simultaneously, the film has been known for its overabundance of objectivist attitudes toward society.

Syndrome may be a living embodiment of toxic fanboys turned into Mad Online™ trolls, but the entire driving force behind why he is evil is that he doesn’t like how “special” superheroes are. Syndrome’s attitude is anti-objectivist, meanwhile our heroes give their children speeches about their being special because the abilities they were born with dictate that they are “special.” Bob Parr even has a rant about how people find new ways to “celebrate mediocrity,” which is certainly a sentiment that rings true in some circles, but objectivism as a system or philosophy is a flawed and severely troubling way to view the world. It puts people into distinctions of worthy or unworthy of greatness based on the inherent gifts provided by their genetic code. “The Incredibles” is still a fantastic film, and despite their troublesome beliefs, the central heroes deserve their greatness because they use it altruistically. Thankfully, “Incredibles 2” shrugs off the objectivist attitudes of its predecessor and instead decides to tackle some more interesting topics: mainly the flipping of traditional gender roles, human obsession with screens and our over-dependence on superhero stories and larger than life heroes.

Through Screenslaver, we dive deep into Bird’s ideas about screen addiction and modern-day superhero entertainment. The exact way these ideas play out or are discussed in the movie is for another article as it would wade into spoiler territory. Suffice it to say that Bird sees how humans have clung to superhero stories, idealizing characters with godlike behaviors and relying on secondary heroes instead of humans taking charge for their own issues. It’s not only an interesting examination of how people have handled deep and disgusting facets of society creeping out into the light in recent years, but also comments on peoples’ growing obsession with superhero movies ala the MCU and DCEU.

The commentary on screen addiction could come off like a Baby Boomer angry at Millenials on their phones, but Bird takes two unique steps to mitigate this potential pitfall, he specifically sets his “Incredibles” films in the 1960’s and, in doing so, is commenting on how screen obsession started even with people from his adolescence as televisions started showing up in households. Bird also specifically makes it clear in his movie that it is not screens that are inherently addicting, but the way we interact with them can develop into an addiction. It’s the kind social commentary that sets itself apart from an angry Fox News host complaining that kids are on twitter too much, to a psychologist actually examining how Twitter is not inherently wrong, but that human behavior and tendency to destroy and devalue what they create is what causes social media (and the Internet in general) to be such a toxic bed of hatred and mindless control. Screenslaver in this sense becomes just as interesting as Syndrome from a villain perspective, but almost more interesting because the themes at play here are much more pertinent than Syndrome’s black-and-white view of the world in the first “Incredibles.” Screenslaver as a whole is a pretty underdeveloped character, though. The plot goes certain ways that results in him never seeming complete as a character, but what the villain is saying is compelling in its own right.

Even though Screenslaver may not be the most fun character, everyone else works spectacularly. Craig T. Nelson handles the out-of-his-element father role of Bob Parr with a wit and exasperated tone throughout the entirety of his focal moments, and his frustration with navigation of this unknown parental world is absolutely beautifully. Violet is dealing with boyfriend troubles, and Bob’s inability to handle the issue is not only comically great, but also absolutely relatable. Fathers and parents in general will love watching Bob stumble through the unknown worlds and varied struggles of his children, spanning from infant to teen. Dash’s issues with his schoolwork lead Bob to go the extra mile, and, while he does the same for Violet, his inability to understand the nuances of a teenage girl is both painfully awkward and hilarious. The main force of comedy in the movie is Bob’s trying to handle Jack-Jack. At the end of “The Incredibles,” the viewer is told that Jack-Jack has several shocking powers, but at the beginning of “Incredibles 2,” none of his family is aware of this fact. Jack-Jack’s multitude of powers (which goes beyond what the previous movie suggests) not only makes for some visually impressive and beautiful technical animation work on display, but makes also a great allegory for parents trying to deal with the variable of a new child, in all its unpredictability. Jack-Jack is a truly “special” case, and the way he wears out Bob will not only be familiar to any parent in the audience, but will also be the making of a few particularly delightful humorous sequences.

Meanwhile, Elastigirl gets the bulk of the excitement by doing the hero work and chasing down Screenslaver. Her plot-line briefly touches on the anxieties a former stay-at-home mom feels when returning back to the workforce, but it does so with a careful hand that never seems to proscribe a sexist, gendered personality for the main female character of the film. Mainly, Elastigirl spends the movie doing hero work; her charming, altruistic personality is perfectly portrayed through the endearing Georgia-drawl of the inimitable Holly Hunter. She is, without a doubt, the star of the film, and putting her front-and-center was a terrific decision. Elastigirl also gets to meet some superheroes with really niche power sets who are utilized in markedly interesting ways that make some action scenes in the final act more vibrant and varied even than some of the better Marvel Cinematic Universe fights.

“Incredibles 2” is a fantastic film with great performances from its central cast, vibrant and interesting action sequences and some really interesting perspective on our modern day reactions to superheroes and growing technology. It’s not only a great movie for all ages that will impress fans who have waited 14 years for a sequel, but is great for the whole family. The Incredibles are back and ready for action!