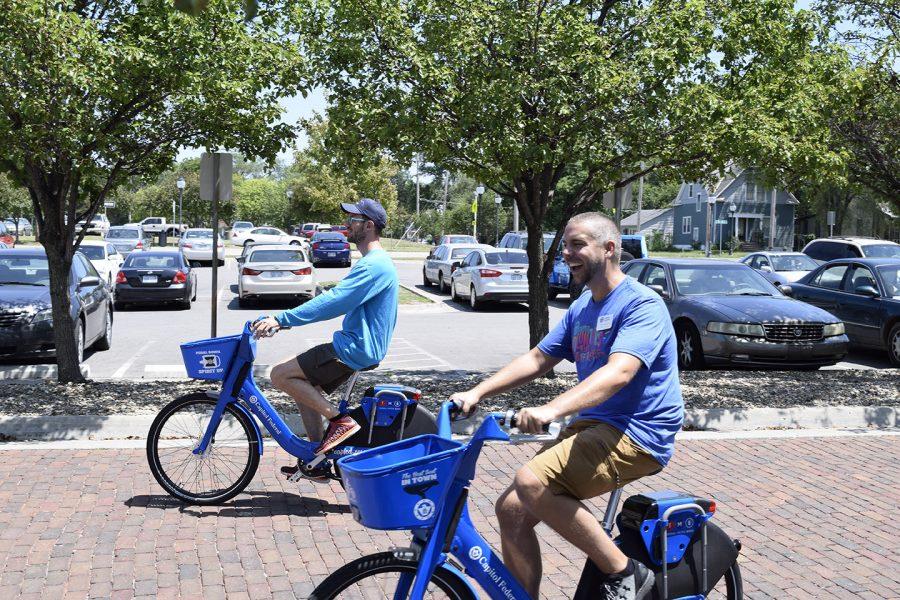 The bike-share service now has 300 bikes spread across the city, thanks to a partnership with Capitol Federal Savings Bank. Two hundred of these bikes were rolled out with a soft launch throughout the month of June, with official launch events at Visit Topeka and the Topeka and Shawnee County Public Library on June 29.

Karl Fundenberger, the Topeka Metro bike-share coordinator, said that the program began with 100 bikes in 2015, what he called the “red bikes.” One hundred more, sponsored by Capitol Federal and painted blue to match the sponsor’s color, were added in 2016, bringing the total to 200.

The “red bikes” had a noticeable paint defect and TMB’s vendor recalled them, which put the service back down to 100 bikes.

Capitol Federal representatives were on hand at the launch events as well. Tom Hagen, who works in marketing for the company, said that Capitol Federal was very excited to continue their partnership with TMB.

After the recall of the “red bikes,” Capitol Federal decided to sponsor an additional 200 new “blue bikes.”

Hagen said that there were many benefits in Capitol Federal partnering with TMB.

Hagen said that some people don’t have cars or can’t walk to some places and this offers an alternative for those people.

The new bikes have a few new features as well. The new bikes are chain-driven, as opposed to the previous bikes which were shaft-driven. They also have new inverted brake levers, which Fundenberger said will take less pressure and grip strength to stop than the older bikes. Tires on the new bikes are also wider which will help on a variety of terrain, such as brick and gravel. One feature really stands out, according to Fundenberger.

“Our favorite new feature is a cup holder in the basket,” Fundenberger said.

In addition to the 200 new bikes, TMB also just reach a new milestone, with 5,000 total sign-ups for the program. The team was celebrating this milestone by wearing T-shirts to the launch events that had “5,000” printed on the front. They have been gaining 1,000 to 2,000 new sign-ups each year, according to Fundenberger.

The service has a wide variety of pricing options. An hourly plan costs $2.50 an hour, and is prorated by the minute. Monthly plans are $5. A yearly plan is $25. A $20 annual plan is also available for students, staff and faculty of Washburn University and Washburn Tech. The monthly and yearly plans allow the user two hours of riding every day.

Fundenberger said that TMB wants to make it easy for Washburn students to use the system, and that they are always interested in hearing from students.

At 10 a.m. this Saturday, August 25, TMB is hosting an event on the east side of Memorial Union called Max Out Metro. The event is described in an email and a Facebook event as a casual ride near campus that will be under 5 miles, with a stop for lunch afterwards.

If you want to know more about the Topeka Metro Bike system, or if you would like to sign up for a plan, you can visit topekametrobikes.org. There is also new sign-up kiosk available in the Ichabod Service Center in the Memorial Union.