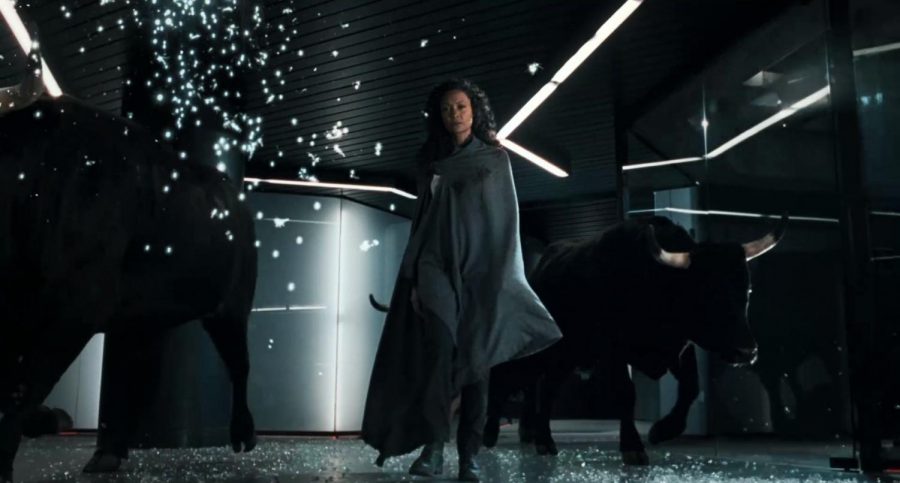 HBO’s prestige science-fiction show “Westworld” returns for a second season. With it comes its sharp examination of humanity’s relationship with technology, wide sweeping vistas, a time-bending plot structure and mostly interesting characters. Does season two drop the confusing, twisty plot from the first season to tell a more straightforward story? Not really, and sometimes its dependence on those plot devices means lackluster choices and uninteresting threads.

Be warned. From here on there will be spoilers for season one of “Westworld.” Read with caution.

The park’s hosts have been awoken, and many of them have started to reign havoc on the guests after Ford (Anthony Hopkins) set them free. The season opens several weeks after the initial rebellion to find Bernard (Jeffrey Wright) passed out on a beach and being rescued by a group of Delos operatives who have arrived to retrieve a very important piece of data. Bernard has no memory of what has transpired in the past few weeks, but the park is clearly in a state of complete chaos and disrepair. Meanwhile we see immediately after the rebellion that our characters split up. Dolores (Evan Rachel Wood) and her second in command Teddy (James Marsden) head out to build an army that will help them overthrow their human oppressors and take the hosts to a place they call “The Valley Beyond.” Bernard, several weeks before his memory loss, is paired up with Charlotte Hale (Tessa Thompson) who is unaware that he is a host. Charlotte continues to try and finish her mission of smuggling data out of the park, and Bernard follows suit trying to hide his host status despite a sudden malfunction that has been messing with him. Maeve (Thandie Newton), who has gained full sentience and the ability to control other hosts, has completely abandoned her chance to leave the park and instead decides to go back into the park to find the host designed to be her daughter and leave the park with her. Finally, William (Ed Harris), often called The Man in Black, initiates a new game now that the park has actual stakes. He searches for “the door” which leads him in the direction of something in the park he created. Something he considers to be his greatest mistake.

In the first season of “Westworld” many fans and critics were upset with the way the show handled its non-linear plot structure. It was criticized for not serving the story and detracting from the development of the characters that people were already invested in. This was a fair criticism, but one I didn’t necessarily share, because I think the tricky plotting created a very effective mystery while also providing an interesting perspective on the nature of memory and the corruptibility of people. This was mostly effective through the story-line of Dolores and William, which revealed itself to be a story about toxic masculinity; the Man in Black was revealed to actually be the former love of Dolores, and viewers see how not getting his way slowly turned him into a vile, ruinous man who killed hosts for fun, because he felt spurned by the one host he fell in love with. Without messing with the timeline that story doesn’t feel as effective, so I forgave the odd structure of that first season.

The second season doubles down on the confusion, and while the season starts off right at the beginning by showing viewers it is messing with time, it purposefully hides so much that the show can become easily incomprehensible at every turn. Not only does it jump from different moments in time (back to the present, then to the future, and the back to past again), but many of the characters are dealing with temporal dissonance as well, so their ability to confirm what time period we are in is questionable. This structure and the mystery elements of the season are so thick and impenetrable that the show feels like it’s using it just to seem interesting and is afraid to use its characters and a linear plot to make its story feel captivating.

When the season started I forgave its timeline machinations, but as the season continued they slowly beat me down into a real distaste for any time the show decided to do something odd with time.

Other than its plot structure though, this season of “Westworld” really does work for the most part. Plot threads featuring Maeve and her group work incredibly well, and William/The Man in Black also had a very interesting story to follow. Newton continues to knock it out of the park as Maeve in every episode she appears. She brings the confident spirit of Maeve to every quip and joke she makes at the expense of craven Lee Sizemore (Simon Quarterman), but also shows her vulnerability and kindness when talking with the charming and dastardly Hector (Rodrigo Santoro), as well as other characters whose revelation would be spoilers. Newton’s command of the character of Maeve is the strong point of the season, and her group of helpers is a masterclass in unique and competent character pairings that not only creates an arc with legitimate growth for Lee, Maeve, Hector and others, but also makes for fun, witty dialogue that carries viewers through these moments.

Ed Harris also really works as William. Due to the mysterious nature of his character last season and having to setup a devastating and exciting reveal, the character of The Man in Black was not that effective in the first season. Harris fully takes the reins of the character in season two, and with the mystery about his identity ripped away, viewers get to see what really transformed him into such a bad person. His interactions with the newly awoken hosts see him questioning and reckoning with his cruelty, which shows he is not fully gone, but at the same time the show does an incredible job of portraying him as a deeply paranoid and distrustful character who delights in violence and treachery. He works as a villain not only because he isn’t sympathetic, but because he is an incredibly deep and emotional figure. Two episodes in particular, “The Riddle of the Sphinx” and “Vanishing Point,” are standouts of the season in terms of how they portray William’s descent into becoming the vengeful, spiteful and bitter person he is.

In particular, this season of “Westworld” is at its best when it is telling anthology style stories about the different hosts and guests to the park. The aforementioned episode “The Riddle of the Sphinx” spends a large chunk of its time telling a bottle episode that feels like a tightly woven episode of “Black Mirror.” It’s about the complexity of the human mind and our inability to even understand the thing that gives us power to understand. At the same time the episode dives deep into the idea of consciousness itself and the whole thing is expertly performed by Peter Mullen who plays new character James Delos (his last name should probably sound familiar). Talking about the episode in depth would be at risk of spoiling its excellent commentary on the human capacity for cruelty towards others, but suffice it to say it is one of the season’s best.

The same goes for the episodes “Kiksuya” (the best of the season and probably one of the most satisfying hours of television ever made) and “Akane No Mai.” Both episodes tell interesting stories featuring completely new characters and their experiences. “Kiksuya” discusses consciousness and the role of pain and separation in the complexity of life and tells a beautiful love story and speaking on the power of compassion while highlighting an incredible culture and telling its story almost entirely in the Lakota language. “Akane No Mai” examines similarities between cultures while taking place entirely in Shogun World, which was teased at the end of season one. These episodes feature tremendous performances from Zahn McClarnon in “Kiksuya” and Rinko Kikuchi in “Akane No Mai.” McLarnon in particular gives Akecheta depth and emotion to a completely unknown character in the first few minutes of the episode that mainly features him. His performance is so good that he turns Akecheta into a new favorite character in just one episode. His performance deserves an Emmy nomination, as do many others of the actors from this season.

If there are any plot-lines or characters that are lacking in this season, they is definitely the plot-lines featuring Bernard and Dolores. While Jeffrey Wright is able to show off his acting chops, more often than not his arc is the one that plays with non-linear storytelling the most. Bernard is also damaged because of the gunshot he sustained last season, so more often than not instead of Jeffrey Wright getting to dig deep in his diverse acting range he is instead asked to just be perpetually confused. The time-bending plot-line itself is overused this season and the fact that Bernard, and by proxy Wright, has to carry most of it is disappointing.

The plot-line Dolores has to follow is also disappointing. Evan Rachel Wood is a fantastic actress, but the main story Dolores follows in this is shifting into a evil liberator. She kills fellow hosts she deems unready for ascension without question. This arc isn’t disappointing because we have to watch Dolores turn into a villain, because the blurring of lines between villain and hero this season is quite powerful and interesting, but villain Dolores is not interesting. She growls most of her lines and her nuance and perspective is completely gone. It’s nowhere near the interesting and captivating performance that Wood gave last season, so while the story-line makes sense in the larger scope of the narrative, it is disappointing because Wood can give so much more.

“Westworld” season two is a mixed bag. Its lowest moments come out of the ways it chooses to handle uninteresting characters and its over-indulgence in time-bending plot-lines, but the season is also filled with the show’s highest and most incredible moments to date producing four of the best episodes to date. Season one of “Westworld” is more carefully produced and interesting, but season two has the most fantastic moments to date. Sadly, it also has the show’s most tedious and discouraging moments too.

The entirety of “Westworld” is available to stream on HBO Go by logging in with your cable subscription information or HBO Now by subscribing at the rate of $14.99 per month.