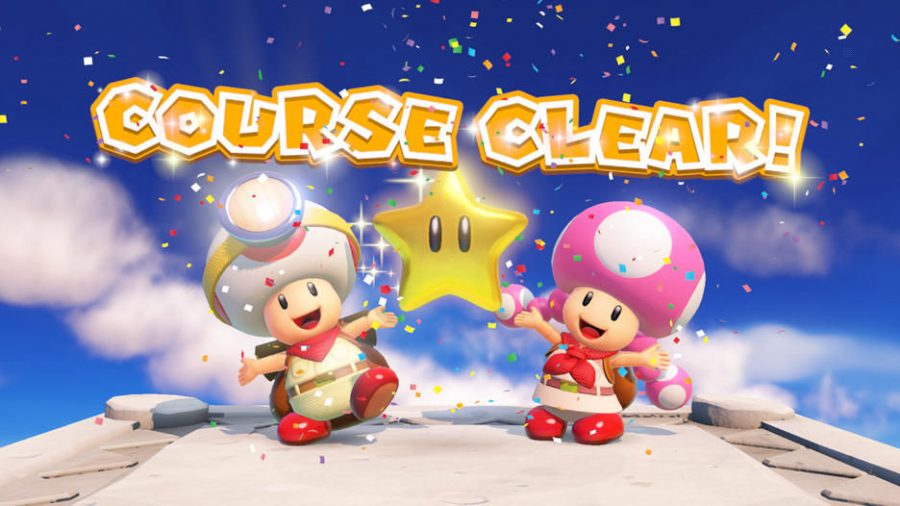 Toadette and Toad complete the puzzle

“Captain Toad: Treasure Tracker”, developed by Nintendo EAD (Entertainment Analysis & Development) Japan and published by Nintendo, is a spin-off of the Super Mario games, starring Toad, a small mushroom, otherwise known as a toadstool, and Toadette, his female counterpart. The game is an isometric puzzle game, consisting of 64 levels, 15 bonus levels, and even more content for competitionists. Originally released in 2014 as a Wii-U title, “Captain Toad” was released on July 13th 2018 on the Nintendo 3DS family of consoles and also on the Nintendo Switch.

Coming from someone who doesn’t go out of his way to play puzzle games and usually sticks to shooters and RPGs, this game is incredibly relaxing to pick up and play. The levels have their own little atmospheres, accompanied by a soundtrack that fits each of them well, with settings ranging from dark, elaborate libraries filled with ghosts, elaborate mazes, a moving train in a snowy area, a level comprised almost entirely of clear pipes you must move through to get to your destination and a multitude of other idyllic Nintendo-esque settings. The base goal of each level is to get through the map and collect the gold star, but there is much more to the game then just that. While you could burn through the game without getting collectibles or completing challenges, the collectibles are both fun and challenging to get. You are also given the incentive of bonus levels which, overall, just give you motivation to go back and fully complete levels. The collectibles consist of gems that are sometimes harder to get than the actual star, and a tiny “pixel toad” hiding on the map that you can find after completing the level once. Challenges range from defeating all the enemies in a level, to collecting all the coins in the level. These challenges and collectibles are also usually harder to complete/acquire than the star, and the extra challenge is welcome. One of my favorite levels in the game had a challenge that forced me to sneak around without being seen by enemies, forcing me to play it like it was a Metal Gear game.

In between the normal levels, there are also smaller levels that consist of toad riding on a mine cart, armed with a plant-shooting cannon. They function an on-rail shooter mini of sorts with the main objective being to just get to the end of the track. It lets you shoot at enemies and blocks to get coins and the like, however, aiming can be frustrating at times, but it is easy to warm up to. Mixed in as well are boss levels, that are fast paced and a bit more challenging then normal levels, but still allow the same number of collectibles that encourage you to come back.

As for the plot, it is standard Mario fare, and people usually don’t get Mario games for a story, they get it for fun gameplay. The story given though, is the amount to be expected from a Nintendo game.

One of the most impressive things on the game is how well it runs. Seasoned gamers will know that straight console-handheld ports usually don’t end up running that well, but some magic has made this game run great, even on a system as small as a DS. However, there are some tiny issues, like strange visual glitches on the edges of the maps

Overall, this game is perfectly suited for handheld devices. Captain Toad is easy to pick up and play, and will bring out the game completionist in you with the charming Nintendo aesthetic. It is a fun puzzle game, and I would say it is worth the time of any Nintendo fan, the puzzle game genre, or just a chilled-out pick up and play game experience.