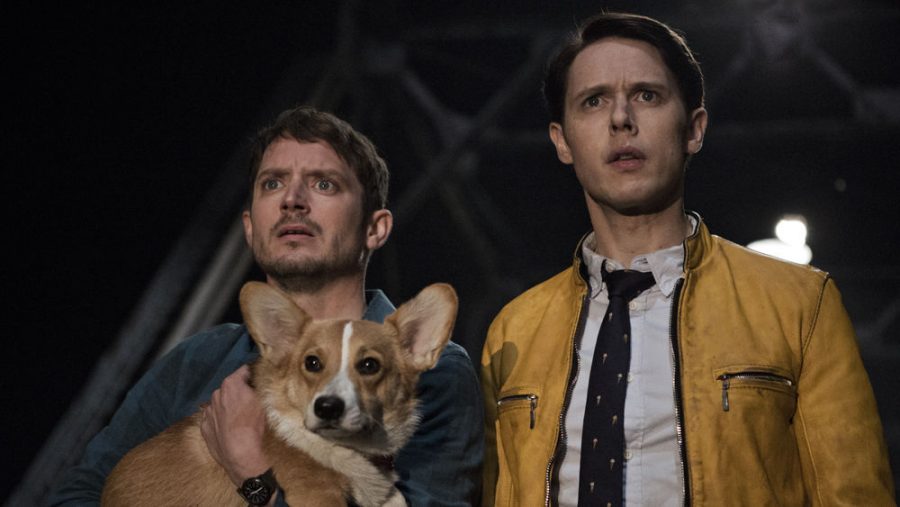 Clueless Todd (Elijah Wood) and Dirk (Samuel Barnett) negotiate with a suspect in a kidnapping case. The series, which cherry-picks details from the original books in order to create a series-long mystery, streams on Hulu.

As everyone rushes to finish their last Netflix binge or finish their summer beach read before settling into coursework, “Dirk Gently’s Holistic Detective Agency” quietly exists outside of mainstream chatter, despite perfectly encapsulating the spirit of a new school year for both world-weary upperclassmen and excited freshmen. Whether one is speaking of the cynical book duology that started it all,or BBCA’s latest attempt to put the detective on the small screen, any of the many incarnations of Dirk Gently are amusing ways for sci-fi fans to relax as the school year begins.

Famous for his “Hitchhiker’s Guide to the Galaxy” trilogy, Douglas Adams revamped an old “Doctor Who” script of his, and turned out the first title in the duology, “Dirk Gently’s Holistic Detective Agency.” The concept is simple yet absurd: a detective who doesn’t bother to look for clues. Bound by the idea that the universe is connected, he stumbles around conning desperate people out of their money, all the while telling them that if he walks around long enough, he will eventually stumble into the solution. In both books, the said titular character makes his appearance only after his outlandish cast of of ghosts, Norse gods and time-traveling professors have set up the mystery. For what should be a fun premise, the books themselves are downcast, brought down by morose leading characters and a general feeling of hopelessness that permeates even scenes that should be happy.

Like with all of Adam’s books, the novels have an unspoken pact with the reader, and just gets on with the story. Chock full of snappy dialogue and one-liners that end up being important later, the books are best read by readers who are fully prepared to read it a second time to truly understand what happened. Essentially, the books are literary puzzle boxes that give you the feeling that an Encyclopedia Brown-style explanation is needed at the end of the book. Although, the second book, “The Long Dark Tea-Time of the Soul” is a large improvement on the first book, mostly because it seems much more like a novel and less like a discarded script. Much as it pains me to admit, this is one of the few examples where the adaptation comes across as slicker and better explored than the original.

Quirky and irreverent, the newest incarnation (there have been many) of the world of Dirk Gently, headed up by Samuel Barnett and Elijah Wood, is a colorful and odd show every bit as clever as the books. An adaptation in name only, Dirk is reimagined as a cheerful yet tragic figure who is buffeted around by the forces of the universe that guide him from through unsolvable case after another. The show itself is an amusing clash of British inspirations with  American of TV tropes, such as over the top scenes, excessive violence and unrealistically dynamic characters. It’s also a brazenly optimistic show that assumes that the watcher will be charmed enough to stick around through the convoluted plot. It also sends messages antithetical to the depressing source material: things will get better, people do want to be friends with you and that everyone has a purpose.

The turning point of the series comes when Dirk (Barnett) finally turns to Todd (Wood) and asserts that he has been making choices out of desperation for too long. He needs to get on board with the universe’s plan to get in on the adventure, and it’s a moment that resonates all too well with anyone that feels as if they are in a rut. In a TV landscape dominated by an oppressive woe-is-me attitude, it’s refreshing to see that, even out of the gloomiest of material, people instinctively create works of optimism.