‘Mission: Impossible – Fallout’ delivers some of the best action in years 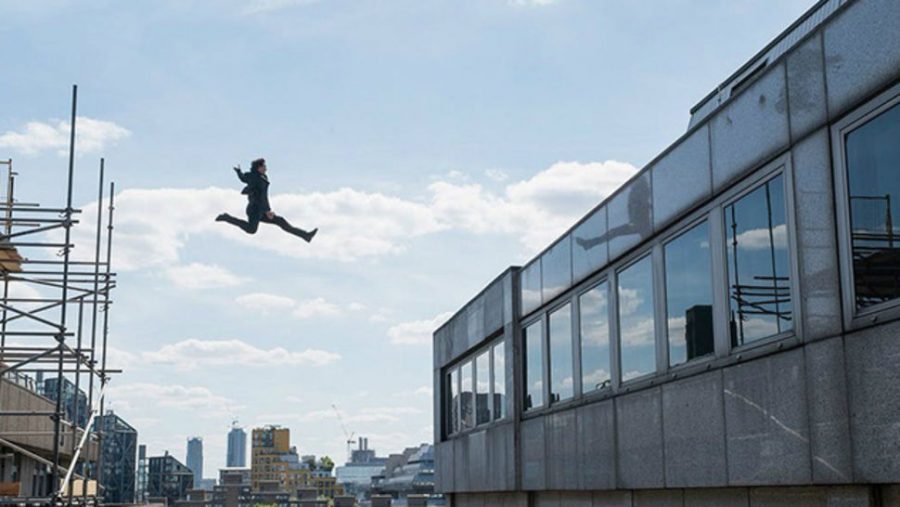 The “Mission: Impossible” franchise (hereafter referred to as “M:I”) is vastly underappreciated.

In a cinematic landscape filled with digitally rendered fight sequences, as well as digitally rendered people, it is refreshing to see true stunts and actions performed by Tom Cruise in his latest film. The new film is part of a franchise starring a billionaire who repeatedly risks life and limb for our entertainment. The newest entry of the series is no different, and it sets the bar high for fast-pace action and filming speed. “Mission: Impossible – Fallout” is a movie that takes time to get started. However, don’t get discouraged, as the rest of the film provides you with 120 minutes of feeling like your heart is strapped to a car battery.

Two years after Ethan Hunt (Tom Cruise) and his team of agents, known as the Impossible Missions Force, captured terrorist Solomon Lane (Sean Harris), Hunt is tasked with obtaining three Plutonium cores that a group wants to use to demolish the World Order and institute an anarchy throughout the world. The group goes by the name, The Apostles, and make up a distinct group separated from Lane’s Syndicate and led by the unidentified John Lark. While attempting to intercept the cores, Hunt is forced to make a choice: does he complete the mission by obtaining the cores but lose his friend and teammate, or does he choose to botch the mission and save his friend. Hunt chooses the latter, but he must go deeply undercover to obtain the cores before they get into the hands of John Lark. To ensure that the government won’t be double-crossed, CIA director Erica Sloane (Angela Bassett) orders Hunt be tailed by Agent August Walker (Henry Cavill). Under constant watch, Hunt calls in help from Benji Dunn (Simon Pegg) and Luther Stickell (Ving Rhames) to finish the mission, and the four of them run into MI6 agent Ilsa Faust (Rebecca Ferguson), who helped them capture Lane a few years earlier. Although, now her and her government have different plans for Lane and The Apostles.

Make no mistake, “Fallout” starts slow. It takes awhile for the first big action sequence of the film to start, which is different from past films in the franchise which always start big. Although, the slow start is because the film has other, insane plans as it progresses. Around the 20 minute mark, the action begins with a military-grade jump out of plane into Paris during a thunderstorm, a scene that is shot to like a single, unedited take. It is by far one of the most compelling, exciting and technically impressive action scenes the film series has ever had and it isn’t even the best sequence in this film.

“Fallout” continually excites the audience with its action until you are so far on the edge of your seat that you might fall off. Talking about more of these scenes would spoil the surprise, but, if you made a list of top 100 film action sequences, I wouldn’t be surprised if at least five of this film’s scenes made it in.

McQuarrie just knows how kineticism works in movies like this; he knows how to structure the films to get from point “a” to “b” in the most exciting way possible. Other action films have their best set pieces right in the middle, but McQuarrie, Cruise and editor Eddie Hamilton structure the film so that it is constantly growing and advancing. A specific helicopter scene towards the end that you might be hearing whispers about is, without a doubt, a “top five action movie moments ever” contender. It is that good.

There’s some interesting character depth on play here, as most come to terms with the fact that Hunt is unable to let innocent people die- even if it means millions of others will live. The movie beats this point home, and Cruise shows the pathos and the heart behind Ethan’s moral compass perfectly. Ethan Hunt is a trained killer that, as these movies have shown time and time again, can do anything. He is practically a demi-god, yet he seems to abhor the idea of death so much that he can’t bare to question the needs of many against the needs of a few.

Cinema (and pop culture in general) needs kind, altruistic people like Ethan Hunt. Too many people cry foul at Captain America because he’s a good guy who always does the right thing no matter what; fans are in dismay at the character’s unrealistic qualities. But, we need symbols of hope like Captain America, Superman and Ethan Hunt. Otherwise we’re awash in flawed and flimsy heroes who be heroic for selfish reasons. I appreciate Ethan Hunt, and “Fallout” excels by showing us why heroes like Hunt matter and why what many see as his greatest weakness, is probably his greatest strength.

Meanwhile the other characters are fantastic. Rebecca Ferguson is back and her whip smart attitude and demure sense of humor as Ilsa Faust is always welcome. However, we also get a chance to see a dramatic and emotional side to her as well: she is backed into a corner and can’t escape the life of an agent. Her life is commanded by fear and a forced sense of duty. It’s sort of the inverse of how Ethan sees his duty, but Ilsa is never cynical or angry about her role. She’s just as altruistic as Ethan is.

Pegg and Rhames are hilarious as Benji and Luther respectively, and some of the most fun moments of the film come from them and their quips back and forth to each other. Both also play excellent audience surrogates for some of the absolutely bonkers action sequences.

Cavill is also a standout and plays Walker perfectly. His mustached, overly-masculine persona reveals a man so consumed by raw strength that he could knock down building just with a crack of his knuckles. His arms are so powerful that in one shot he “reloads” them like he has shotguns for fists. He’s delightfully deadpan throughout the film and is the exact opposite of Hunt in every way possible. He’s a brute with a chip on his shoulder. It’s almost as though you love him and hate him at the same time.

If there is one complaint I may have it is the overall plot. McQuarrie executes his script perfectly and the action scenes themselves are so good that it removes the rockiness, but often the script feels as though they came up with the sequences and then decided to write the plot around it. Make no mistake, it is a much more well written and coherent story than a lot of other modern day blockbusters. It’s just that keeping of track of what is where. why people have things and exactly what affiliations are present is just hard to keep track of. Also, the ultimate goal of The Apostles is unclear. You piece it all together eventually, but the plot is just really odd at certain points.

One thing is for certain, though: “Mission: Impossible – Fallout” is by far the best entry in this franchise to date. It’s an interesting examination of the psyche of our central character. The absolutely incredible stunts and action sequences they pull off, and just the overall fun of the film make this not only one of the best action films of this year, but one of the best action films ever. See it on a massive screen, and, even if you haven’t seen any other “M:I” film, you should definitely go see this one.