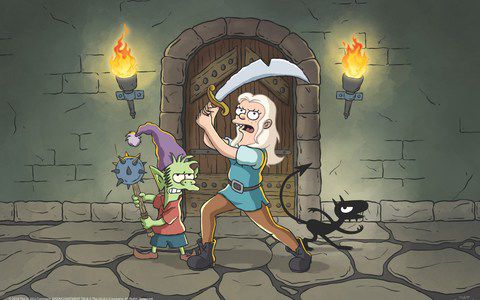 The successor to The Simpsons and Futurama takes a while to get good, but when it does, it is a fun time.

The latest animated Groening series with Simpsons-style animation comes in the form of “Disenchantment,” a Netflix Original comedy series that consists of ten 30-40 minute episodes. It stars Abbi Jacobson as Bean, Princess of “Dreamland,” the main setting, which is part Westeros and part Land of Ooo (from Adventure Time).  Eric Andre, who potrays Luci, her “personal demon” that follows her around everywhere, and Nat Faxon, who voices Elfo, a small elf that does the same thing, but is the most enjoyable out of the three. The series basically revolves around their misadventures; the first few episodes have no particular direction, but the later episodes tell a continuous storyline.

I didn’t have any problems with the cast. In addition to the leads, “Disenchantment” also includes “Futurama” alum such as John DiMaggio, Maurice LaMarche and Billy West. All of the actors do their job perfectly fine. The issues are the central characters. They are incredibly unoriginal- one idealistic whiny dude and a rebellious creature (Elfo and Luci), and Bean, who basically functions as the “princess who really doesn’t want to be a princess”- she is basically Princess Vespa from Mel Brooks’ “Spaceballs.” I never really found the  central characters memorable, and, coming from “Futurama,” which had tons of memorable, likeable and quotable characters, it was super disappointing to see really bland and unfunny characters that aren’t likeable The only exception is Prince Merkimer (voiced by Matt Berry) who absolutely should’ve been in more of the show.

Mark Mothersbaugh (of Devo fame but most recently scored “Thor: Ragnarok”) scores the series, but it really doesn’t make the series any better or worse.

A show can have a bad storyline and still be funny- but “Disenchantment” for the most part just isn’t. The majority of the time, the jokes just don’t work, and they are usually just plain predictable. Sometimes it was genuinely funny, but the majority of the jokes felt really forced, awkward and cringeworthy at times.

What really screwed up the show for me, and could’ve possibly made the show much better from the get-go, is the 30-40 minute runtime for each episode. I can understand why a creator who has been constrained to 20 minute episodes on TV would want more freedom, but it really just made the early episodes more drawn out than they needed to be.

However, the show does a complete 180 with episode seven. Things just start clicking. It sort of grows into itself and gets to be really enjoyable all around. The main three became more likeable- they stopped being so wooden and full of archetypes, and there were some really enjoyable side characters that got considerable amounts of screentime. It really spiced things up, and the overarching storyline that previous episodes had hints of but really didn’t include drove everything forward.

Overall, I think this show has great potential- but I had to force myself through the majority of it, and if I hadn’t chosen to review it, I honestly would’ve dropped it during the first episode- but I am glad I pushed through to see it hit its stride (although it took a while). The show just needs one thing to make it great: consistent quality across the board. While it had a rocky start, I really do think “Disenchantment” has the potential to be another “Futurama,” and I am looking forward to see where the series goes next.