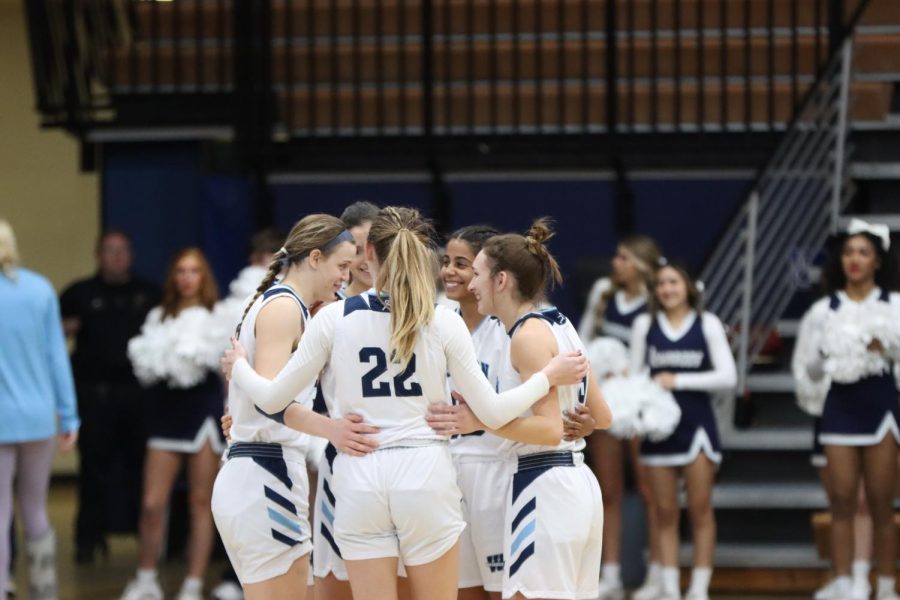 The starters huddle together before the game Feb. 22, 2022. Washburn defeated Northeastern State 71-49 in the game.

Heading into a busy final week of regular season play, Washburn women’s basketball team had lost two in a row and fallen to 12-13 on the year with a Tuesday evening matchup with Northeastern State on deck.

The Ichabods got back to their bread and butter with a strong defensive effort that led to a 71-49 win over the RiverHawks.

“Defensively we were pretty on que with the game plan,” said Washburn head coach Ron McHenry. “Offensively, it was one of those games I look for a lot with a lot of kids in the scoring column and a lot of assists… Offensively we played pretty clean.”

22 points is the largest win for Washburn this season, who moved to 13-13 overall and 11-9 in MIAA play after the win.

Defense set the tone early for Washburn as they held the RiverHawks to six points in the first nine minutes and to only 22% shooting as a team in the quarter. Seven different players scored for the Ichabods in the first quarter as they built a 17-9 lead after ten minutes of play.

After scoring four in the first quarter, senior guard Nuria Barrientos continued to drive, quickly scoring four more in the second and helping Washburn’s lead grow to as many as 12.

Five straight points in the final three minutes from sophomore guard Hannah Willey grew the lead to as many as 16 points.

Offensive rebounding was the only thing keeping Northeastern State in the game, with eight offensive rebounds in the half. Four straight points for the RiverHawks to end the half made it a 34-22 game after 20 minutes.

The Ichabods’ lead never fell below 14 points in a third quarter that featured efficient offense from both teams. Six early points from freshman guard Aubree Dewey helped grow the lead to 20 points midway through. Dewey had also entered the starting lineup for the second time in the season.

“I’ve talked to her about, ‘If you just get us into our stuff, guard somebody and get us organized and then shoot it when you’re supposed to,’ and that’s what she did tonight,” McHenry said.

Two late three pointers from senior guard Shae Sanchez, who was playing against her former team, made it a 58-35 after three quarters.

“Definitely feeling a little more energized (than) when I went to NSU and didn’t have a great game but to be here and have coaches of all sports telling me, ‘Go have a great game’,” Sanchez said. “As hard as it is to play against some of my really great friends, it was just a really great team win.”

The RiverHawks started the fourth quarter on a 7-0 run, which was quickly put to rest by a 3-pointer from senior guard Hunter Bentley and a layup from freshman forward Lauren Cassaday, making her the first player in double figures for Washburn.

With under five minutes left in the game, both teams emptied the bench, and the Ichabods grew their lead to as many as 26 before ultimately winning 71-49.

Sanchez finished with 13 points to lead Washburn, including three 3-pointers. Cassaday had 12 points on 4-5 shooting. Bentley, Barrientos and sophomore Macy Doebele each added eight points in a balanced performance.

“Our offense was flowing; we had 18 assists, so people were looking for the open shooter… It was just good for us,” Sanchez said.

“We needed some momentum. We got beat twice on the road: one we didn’t play real well and one we got beat in overtime. This is a grind right now,” McHenry said. “You need to catch some momentum and tonight was a big game for that.”

Washburn will stay at home to take on Missouri Southern for senior night Thursday, Feb. 24.