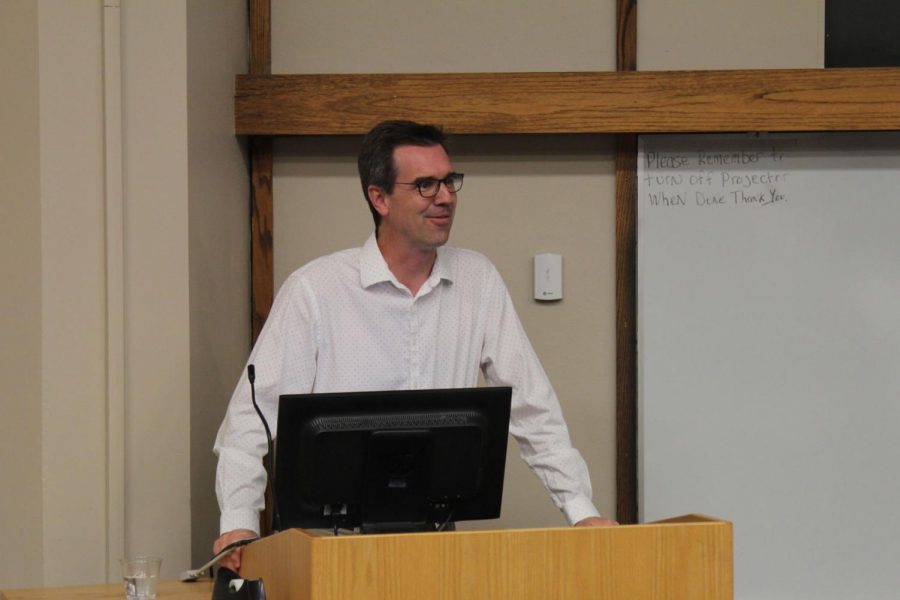 Up on the lectern: Eric McHenry retraces the path that led him to the discovery about Langston Hughes' age. He used newspapers.com's vast database to find mentions of Hughes.

If there is one influential figure who embodied the spirit and the times of the Harlem Renaissance, it is Langston Hughes, the African-American poet, novelist and commentator on black culture and consciousness who, due to a recent discovery, turned a year older this month.

Eric McHenry, Poet Laureate of Kansas from 2015 to 2017 and associate professor of English at Washburn, managed to do exactly that earlier this month by discovering that Hughes was born not Feb. 1, 1902, but a year before. McHenry made the discovery on Newspaper.com, a database with an extensive list of newspapers dating back to the 1700s. He went onto the database to find out whether his great-great-great-grandfather, J. C. Hebberd, and his friend’s great-great-grandfather, A. C. Shinn,  had ever come into contact. After finding out that they had, he began to search for other historical figures.

McHenry soon fell down a research wormhole. He found himself looking at the eccentric histories and unexpected genealogical connections between people like Robert Frost, Lee Shelton and even clansmen. It was while going down this wormhole, he found the error in Hughes’ birth date.

According to “The Plaindealer”, a local Topeka African-American newspaper that covered daily happenings in the area, a young Hughes had fallen into a rosebush and injured his eye. The date was Dec. 20, 1901. This marked the discovery, as Langston Hughes has always been reported as having been born in 1902 a year after his incident as a young child.

“I immediately got my phone out and took a photo because I didn’t know how to take a screenshot then,” McHenry said.

Not only that,  but on May 17 of the same year, little Langston and his mother, Carrie Hughes, were reported to be going to Buffalo, where the boy’s father resided back then. On Jan. 17, 1902, Hughes and his mother were reported to have spent a few days in Mollie Langston’s abode. McHenry corroborated his findings with Tom Averill, writer-in-residence and Professor of English at Washburn, and his friend, Denise Low, co-author of the book “Langston Hughes in Lawrence.” Low gave him census data. McHenry found a 1905 census that mentioned him being four and then two 1910 and 1915 that confirmed McHenry’s assertion.

The significance of the revelation about Hughes, McHenry suggests, depends on why the birth date change took place. McHenry posed three theories. According to him, Hughes’ mother, upon admitting him to an all-white elementary school, may have changed it to protect him from the racism that was prevalent at the times. Hughes, with self-invention in mind, may have also changed it before going to high school in Cleveland, a new territory for him. He may have also changed it to escape the World War I draft, which he saw as destructive and did not approve of.

As for the actual answer, McHenry admits that he is stumped. He said the answers could be found in the myriad of letters that Hughes wrote. He also suggests looking for hints in Hughes’ work. Incidentally, there are a few references in his memoir, “The Big Sea,” in which he seems very conscious about his age but mentions his age as 14, staying true to the narrative of him being younger. He does slip up once. McHenry leaves it up to the expert to look deeper into this.

Ultimately, McHenry emphasized the importance of digitized archives and how, after only a year and a half of Newspaper.com’s existence, he found the discrepancy in Hughes’ age.

“As a matter of fact, I should not be too self-congratulatory about discovering things about his birth year. If you look up the name, Langston Hughes, on Newspaper.com, a timeline that shows every year Langston Hughes was mentioned [will appear],” McHenry said, before adding, “There is nothing preventing any of you students here at Washburn University from going out right now and making a discovery that will influence the way we think about some historical figure.”