Volleyball team blows away the competition this fall 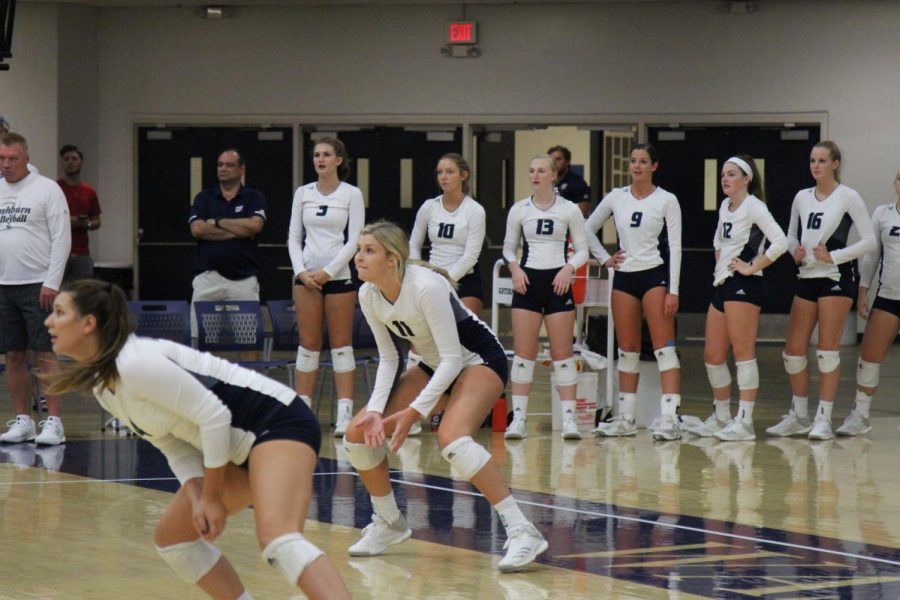 Washburn’s volleyball team remains undefeated as of this past weekend as it added another four victories to its record for this season. The team played against Lubbock Christian, Southwestern Oklahoma, St. Mary’s and Arkansas-Monticello Sept. 7 – 8 in Lubbock, Texas. Each game ended in a 3-0 victory for the Ichabod’s team with the exception of the tournament match against Southwestern Oklahoma that was a 3-1 victory for Washburn.

The volleyball team faced off against the Arkansas-Monticello Cotton Blossoms and the Lubbock Christian Lady Chaps Friday, Sept. 7. Their match against Arkansas-Monticello largely stayed positive for the Ichabods overall, except for the second set where the team struggled against the Cotton Blossoms but still managed to defeat them with a brutal offensive strategy. That same offensive power remained with the Ichabods in their second match against Lubbock Christian in a beautiful display of efficiency and supremacy. Erica Montgomery led the team against the Cotton Blossoms with a total of 12 kills while closely followed by Genna Berg with eight kills. The tally of kills in the second match against the Lady Chaps were more spread out among the team with many such as Taylor Antonowich, Makayla Maxwell and Allison Maxwell earning at least seven kills each. The Ichabods defeated Arkansas-Monticello with a hitting average of .277 to .031 and three positive sets, 25-11, 25-22 and 25-13. The Lady Chaps were also defeated by the Ichabods with a hitting average of .256 to .075 and three positive sets, 25-21, 25-11 and 25-18.

The Ichabod team faced off against the Southwestern Oklahoma Bulldogs and the St. Mary’s Rattlers Saturday, Sept. 8. Though the teams they faced on Saturday proved to be a greater challenge than those they faced the day before, the Ichabod’s pulled through to add another two victories to their record this season. Their match against Southwestern Oklahoma proved to be difficult but thanks to players such as Antonowich, who opened the third set with three aces to bring Washburn to a blistering 9-0 lead over the Bulldogs, kept the match firmly in the hands of the Ichabods. The second match against the Rattlers saw the Ichabods seizing the initiative early in the first two sets, earning kills in quick succession to establish their lead, but a 3-0 lead by the Rattlers in the final set pushed the Ichabod team to retaliate in order to regain their momentum and final consecutive kills made by Montgomery and Berg finished out the set for Washburn’s ninth sweep this season. The Ichabods defeated Southwestern Oklahoma with a hitting average of .158 to .087 and three positive sets out of four, 24-26, 25-18, 25-20 and 25-16. St. Mary’s was also defeated with a hitting average of .121 to .176 and three positive sets, 25-16, 25-19 and 25-22.

Head coach Chris Herron has a positive attitude for his team and plans on training and drilling them harder as they approach their next tournaments.

“We played well this weekend. The competition level was higher against Southwestern Oklahoma than we were accustomed to. We lost the first set after having a pretty good lead, but our team responded and we weren’t really in trouble after that,” said Herron.

The Washburn volleyball team will play against Fort Hays at 6 p.m. Sept. 14 at Washburn University and against the University of Nebraska at 3 p.m. in another home game. Keep cheering our Bods on to victory.