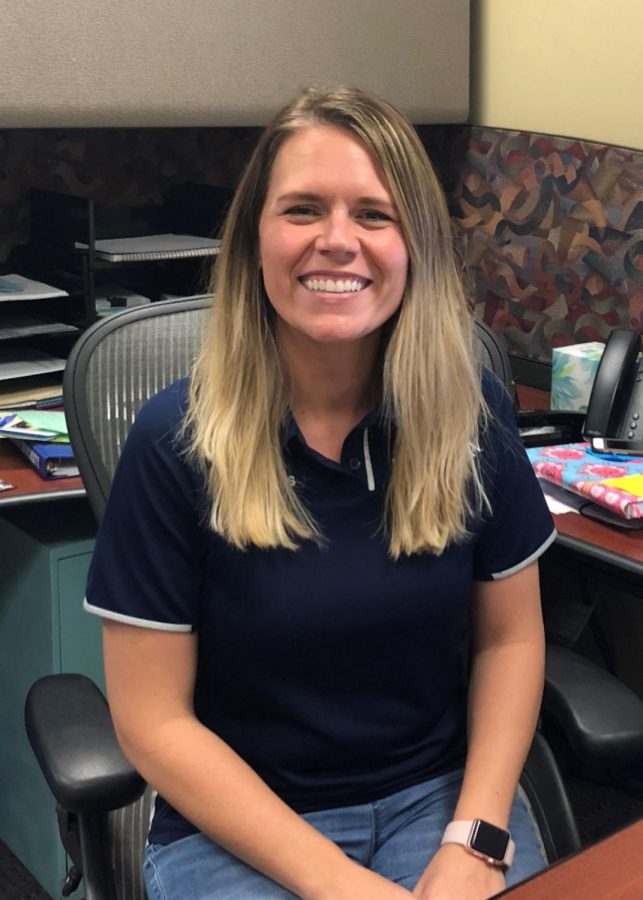 Whitney Slater enters her first year as the new director the Rec. She is looking forward to bringing in some new ideas to bring excitement to the Rec.

The Student Recreation and Wellness Center, better known simply as the Rec, is one of students’ favorite places to hangout. The Rec recently came under new leadership as Whitney Slater has taken over as the new director.

Slater is originally from Fredonia, Kansas. She then went on to attend KU where she attended both undergrad and graduate school. While going to school there she began her career in collegiate recreation by working at the KU Rec Center for four years. Prior to coming to Washburn, she worked for seven years as the assistant director of recreational services at Emporia State.

The new director enjoyed her time at Emporia State but is excited to take over here at Washburn for a couple of reasons. She is excited to have a program of her own and to grow as a professional at a school with such a tight knit community.

“I was excited about the opportunity to really have my own program, but also at a school that is kind of a smaller, closer knit type of community which is something I really enjoyed with working at Emporia State, because I think you can get to know the students a little better and you can build those closer relationships.” Slater said.

Slater is married to her husband Jeff who works at Burlingame Elementary as a K-6 PE teacher. He is also the head football coach at Burlingame High School along with being the head track coach. Whitney and Jeff have two children, a three-year-old daughter Kinsley and a son Deacon who just turned one last month.

Between her and her husband’s work and their two young children, they do not have a lot of free time. In the free time they do have they enjoy many things that include athletics. They are big fans of college basketball and football. They love supporting KU basketball as they try to attend games whenever possible. She attended the 2012 Final Four in New Orleans when KU advanced to the national title game.

Slater is excited to build on the solid foundation that former director Joel Bluml has built.

“I think there is some opportunities to grow and I am excited to try to bring back a little more excitement to specifically our intramural programs.” says Slater.

The Rec also recently purchased some new exercise equipment that Slater is excited about and has already seen a large increase in student participation in using this equipment.

The Rec building is now about 15 years old, so one of Slater’s goals within the next year or so is to make some minor improvements and using social media platforms to figure out what students want to see added.

“Over the next year or so, you’ll probably see a few new additions to our building including some new décor and some new equipment is also hopefully on the plan”, says Slater.

Slater’s main goal as director of the Rec is to bring in some new ideas and gain a little more buzz around the Rec and its programs.

“My plan is to just do some stuff to bring in some new fresh ideas and bring some excitement back to the Rec.” said an excited Slater.

Slater is extremely pleased with the work that the student staff does. She said they [the SRWC] rely heavily on the student staff and they put a lot of responsibility on their shoulders because the ‘professionals’ are limited.

The new director also mentions the importance of making sure her student staff is buying into everything that she is trying to do because in the end, the student staff is who people associate with the Rec more so than someone like the director.

“I want them [the student employees] to be able to have pride in what they’re doing and be excited to be at the Rec and to be a part of our staff.” Slater says.

As Slater transitions into this position and looks to improve the overall existence of the Rec, she wants people to know that her door is always open if students have an idea for a new intramural team or something you would like to see at the Rec.

“I’m always open to hear out their suggestions because when we’re trying to come up with programming, it is for the students. If there’s something that we’re not doing that could help fulfill their needs then I want them to be able to feel comfortable enough to shoot me an email or come stop by my office and know that I am here to try and make those things happen.” expresses Slater.