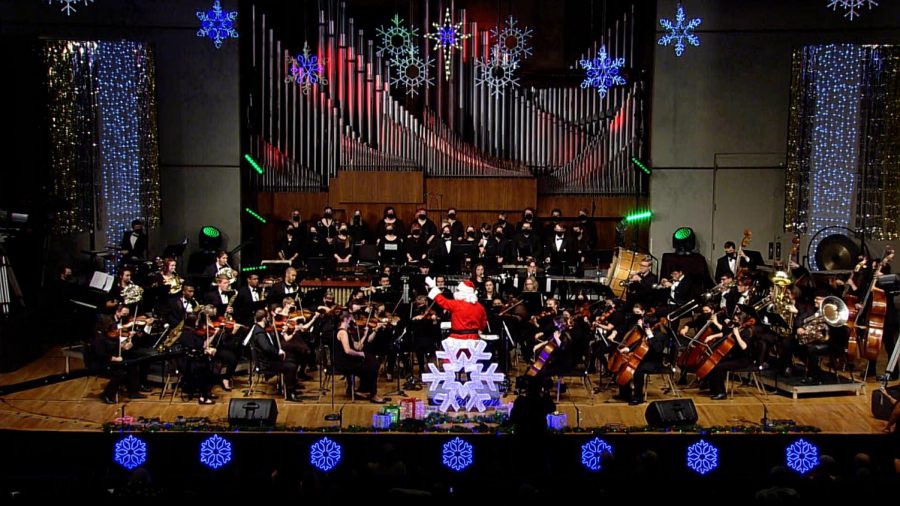 The Vesper's Concert putting everyone into the Christmas spirit. The concert took place Dec. 12, 2021 at the White Concert Hall.

Christmas music was performed by many, including Washburn singers, choir, symphony orchestra, string orchestra and percussion ensemble. This year’s concert was even recorded and posted on KSNT.

The event allowed fellow students previously separated between classes to see the progress and dedication.

“It was a lot of fun performing in the concert. I really liked having an opportunity to hear some of the other groups like choir and percussion ensemble that I don’t hear as often, “ said Gabriel Kniffen, a sophomore music student.

The Holiday Vespers Concert is a cherished annual event filled with tradition and holiday cheer.

“It is held every year as not only an ‘end of the semester’ performance, but as a means for Washburn musicians to celebrate the holidays with the greater Topeka community. It also highlights the Music Department Student Scholarships, which are very important to our Washburn Music students,” said Brad Merryman, administrative assistant for the Washburn University department of music.
Washburn University has given students the opportunity to further their education in the appreciation and creation of music. The Holiday Vespers concert is the event that allows those students to end their semester with a celebration of skill.

“I started playing violin when I was in 5th grade and I’ve been playing guitar for a little while longer than that. I knew I wanted to pursue music in higher education when I thought about how I couldn’t stand to put music to the side for another professional career,” Kniffen said.

All the student based groups were given an opportunity to perform, as well as individual students and faculty members that contributed to the holiday cheer in the first Department of Music event of the season. The next being the Topeka Festival Singers Concert, which took place Dec. 20.